Myth of the greedy public-sector workers

How can politicians and the media be complaining about pensions for government workers when a decent society would guarantee a decent retirement for all workers?

POLITICIANS AND the media have found a new scapegoat for the economic crisis and the savage budget cuts being carried out by state and local governments: public-sector workers and their unions.

It turns out the problem all along was overpaid and underworked government workers. You know--all those teachers and firefighters and social workers. And especially the retirees selfishly living large on a fat government pension.

"We have a new privileged class in America," Indiana's Republican Gov. Mitch Daniels told Politico. "We used to think of government workers as underpaid public servants. Now they are better paid than the people who pay their salaries."

Unbelievable. But these claims aren't just coming from Republican jerks. Earlier this month, the liberal New York Times ran an article about the "coming class war"--but in its upside-down world, the greedy villains were teachers and bus drivers, not Wall Street bankers or corporate CEOs:

The haves are retirees who were once state or municipal workers. Their seemingly guaranteed and ever-escalating monthly pension benefits are breaking budgets nationwide.

The have-nots are taxpayers who don't have generous pensions. Their 401(k)s or individual retirement accounts have taken a real beating in recent years and are not guaranteed. And soon, many of those people will be paying higher taxes or getting fewer state services as their states put more money aside to cover those pension checks. 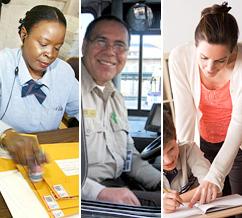 Of course, the budget crisis hitting state and local governments is real. On the very same day that the Times drew a target on the backs of retired teachers, it published an article documenting how states and municipalities are making stunning cutbacks--from Hawaii shutting down public schools on 17 Fridays during the last school year, to the city of Colorado Springs turning off one-third of its streetlights.

But the claim that public-sector workers are the source of the shortfalls is absurd.

FIRST OF all, the real cause of the state government budget crisis is a massive reduction in taxes on business and the wealthiest individuals over the last quarter century.

If states and cities wanted to find money for public spending, they could try eliminating the tax breaks they handed out like candy to big corporations. Likewise, the federal government could get $700 billion more in revenues over the next decade if it got rid of the Bush administration's tax breaks for the richest few.

If public-sector workers seem to be better off, it's not because they're doing so well, but because workers in the private sector are doing so much worse.

One big reason for this is Corporate America's attack on unions. For the first time in U.S. history, government workers are a majority of union members, largely because of the sharp decline in unionization in the private sector. Today, more than 37 percent of public-sector workers belong to a union, compared to just over 7 percent of people who work for private companies, according to the Bureau of Labor Statistics.

So one underlying motive for the scapegoating of government workers today is the capitalist class's old-fashioned hostility to working-class organization. The attempt to demonize greedy public-sector workers is part of the attack on unions in the one sector of the economy where they remain strong in any measure.

But when you look a little closer at the claims of the six-figure-income politicians, it turns out that even the advantages that public-sector workers supposedly enjoy are overstated.

Wages are, indeed, higher for government workers than for many private-sector employees who do comparable work, but state workers also tend to be older and more likely to have graduated from college.

According to a study by economists Keith Bender and John Heywood comparing private- and public-sector workers' compensation over the last 20 years, once variables like age and education are factored in, state employees earned 11 percent less and local workers earned 12 percent less than their private-sector counterparts. According to Bender and Heywood, "Over the last 20 years, the earnings for state and local employees have generally declined relative to comparable private sector employees."

The primary target for the scapegoaters is public employees' retirement plans--which are, in fact, stronger than most private-sector workers enjoy today.

But once again, there's a lot of deception here. For one thing, many government workers aren't eligible for Social Security benefits when they retire, so a pension is the only thing they can count on when they stop working.

Then there's a larger question to answer: What do employers, whether the government or a corporation, owe workers when they become too old to work? If the policies of private companies are taken as the measuring stick, the answer is: Nothing at all. Except in a few, dwindling cases, pension plans have become a relic of the past. As the Center for Economic and Policy Research's Dean Baker wrote:

The reality is that public pensions are better than private pensions, but this is largely because most private-sector workers have little or nothing by way of pensions. With a few notable exceptions (police and fire pensions, along with those of IMF economists, tend to be very generous), most public-sector pensions do not provide retirees with an especially high standard of living.

We believe that all workers deserve to be able to retire without fearing whether they can make ends meet, or if their savings in 401(k) investment plans will get hammered the next time the stock market tanks. Every worker deserves a Cadillac pension plan--nothing less.

AN ARTICLE in the New Republic makes it clear what the attack on public-sector workers is really about. Its title: "Why Public Employees Are the New Welfare Queens."

In the 1980s, the Republican Reagan administration tried to focus blame for the economic crisis on "lazy welfare mothers" who supposedly drove around in Cadillacs collecting big government checks.

The lies about "welfare queens" and wasteful government spending on social programs to help the poor were part of an ideological offensive--along with the claim that overpaid union members were pushing Corporate America into the poorhouse--that accompanied the attack by big business on working-class living standards.

The ruling class offensive to take back the economic and social gains of the 1960s and early '70s was carried out on several interrelated fronts, ranging from national politics, to factories and offices, to popular culture.

Key to this employers' offensive was creating scapegoats to divide workers--union and nonunion, unemployed and employed, Black, Latino and white--so that big business could rule them all.

Today, it's lazy, overpaid government workers--and their "Cadillac" retirement plans. And while politicians and the media try to pit different workers against each other, the real welfare cheats get off scot-free. As Baker wrote, commenting on the Times article about the "coming class war":

It is more than a little bizarre, and arguably more than a little offensive, that the NYT would publish an explicit call for an attack on the pensions of millions of workers who never earned more than $40,000 or $50,000 a year. This is in a country where people like Erskine Bowles (the co-chair of President Obama's deficit commission) get $350,000 a year serving as a director of a company (Morgan Stanley) that only exists today because of the generosity of the Fed and the taxpayers when they rescued it in its time of need.

Make no mistake, either--this is a bipartisan attack. When the Democrats' candidate for California governor, Jerry Brown, last month voiced support for Arnold Schwarzenegger's budget-cutting proposals, including raising the retirement age, he explained himself this way: "I'm not going to blame public servants for problems that have been created by Wall Street hedge funds and mortgage sellers, but at the same time, as I did as governor, I know when it's time to tighten our belt."

But today's assault on public employees in the name of "getting through the crisis" will make it that much easier to attack private-sector workers and their shrinking union membership. Local governments are going after unions precisely when workers need all the organization they can muster.

In effect, a large part of our political class is showing its priorities: given the choice between asking the richest 2 percent or so of Americans to go back to paying the tax rates they paid during the Clinton-era boom, or allowing the nation's foundations to crumble--literally in the case of roads, figuratively in the case of education--they're choosing the latter.

There is a class war--and the politicians are on the wrong side. All workers have a stake in taking on the American ruling establishment's warped priorities--and countering the myth of "greedy public-sector employees" that is being used to divide us.

We can't let the politicians sell the lie that government workers are taking too much of the pie when Corporate America has control of the whole bakery.