What do socialists say about violence?

Tithi Bhattacharya, who teaches at Purdue University, looks at how socialists understand the sources of violence in capitalist society--and how it is used.

IN EARLY November, I was teaching the 1857 mutiny in India to my undergraduate class. This was the first large-scale uprising of masses of ordinary Indians against the British colonial government, after 100 years of rape and pillage of the economy and the people by the British. During the course of the mutiny, in a place called Kanpur, a handful of Mutineers killed their commanding white officers, along with their wives and some children, and threw them in a well.

At the same time as I was teaching this, on the streets of London, angry students were occupying Conservative Party headquarters in response to the proposed massive fee increases in education. In the process of the protest, a handful of angry students smashed the windows of the Tory headquarters.

The mainstream media in Britain as well as in the rest of the world are now baying for their blood. Suddenly, we are told to imagine our nice orderly societies, where protest is either non-existent or comes mainly through the ballot box, descending into anarchy. Might becoming right, and thugs roaming our streets, smashing windows of political party headquarters--or even worse, "lawbreakers" (as French President Nicolas Sarkozy has called French strikers) taking the law into their own hands. 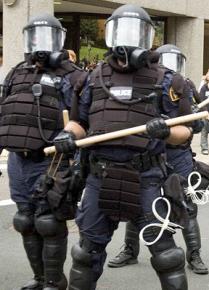 These days, there is a lot of such nonsense in the mainstream press about violence. I suspect the shrill pronouncements of these pro-capitalist media pundits will grow more vicious as the system lurches further into crisis and people across the globe begin to fight for basic rights.

What do we as socialists, then, say about "violence"?

At the outset, let us be clear: socialists are completely opposed to a tiny minority violently attacking a peaceful majority. This is what the ruling class, a tiny minority, does on an everyday basis when they attack a peaceful majority of ordinary people in any country with policy decisions that wreck lives, or bombs that decimate civilizations. In every such instance, as revolutionary socialists, we oppose the violence of the ruling class.

But what about the violence from our side? How do we feel about violence when it comes from the oppressed?

Violence is not a matter of principle

Violence, any violence, cannot be judged in absolute moral terms. We cannot be for or against violence as if it was an action whose context, causes and impact were always the same.

Mahatma Gandhi, a man who the mainstream media always likes to evoke as the epitome of nonviolence, had this to say about violence when used as a defense:

I do believe that, where there is only a choice between cowardice and violence, I would advise violence...I would rather have India resort to arms in order to defend her honor than that she should, in a cowardly manner, become or remain a helpless witness to her own dishonor.

Violence cannot be a principle that we oppose or support. It is a tactic, a tool that can be used by anyone. In order to be for or against a tactic, we need to examine who is using it and, most importantly, to what end.

Take the example of ruling-class violence. The ruling class makes the laws in our society. They make such laws so that when they use brute violence, they can do so without any consequence.

The police are never policed for brutalizing non-white communities in the U.S. One or two policemen might be censored for their "excesses," but no one ever questions the fundamental "right" of the police to use violence. Similarly, when we hear of soldiers in Iraq raping and killing innocent civilians in their homes, we are again encouraged to think of them as a few "bad apples." We are not supposed to question the right of the U.S. to wage war.

So if a few students, out of a mass of several thousand, do happen to break a window, why doesn't the media rush to defend the rest of the protesters and call the window-breakers a few "bad apples"?

This is because the ruling class, whose interests are broadcasted by the mainstream media, wants to be the only class in our society to have the right to use violence without being questioned.

They know their laws and the system they head are fundamentally unfair to the vast majority of people. This is why their laws and policy decisions have to be buttressed by "bodies of armed men" such as the army and the police.

Questioning the monopoly of the state to wield violence then draws attention to something very dangerous--to the fact that the so-called instruments of justice in our society, like the army, the police and the courts, are actually not about providing real justice to ordinary people, but are there to protect the interests of capitalism.

So, as socialists, we do not oppose ruling class violence simply because it takes lives or because we are opposed to violence in any absolute sense. We are opposed to their violence because they use it to implement class rule and to strengthen the stranglehold of capitalism.

If violence is a tool and not a principle, what happens when the oppressed wield it? Here again, socialists do not support violence in principle simply because a non-ruling group has chosen to use it. Here, too, we judge the possible impact such an action might have in any given context. In other words, we look at the strategic objective of the struggle in question and then decide if the tool or tactics of violence will be useful in winning that objective.

To decide on what tool to use before determining what it is to be used for is pointless. When the powerless use violence, we judge it on the basis of whether it will be an effective tool to win the larger strategic goal.

But the question of violence, of course, gets more complex when people who have no power try to use it against the powerful.

First, as socialists we support the right of workers and all oppressed groups to arm and defend themselves against their oppressors. We do not provide this support on the basis of any question of violence, tactical or otherwise. We do so because we support the absolute right of the oppressed to resist oppression.

For example, it would be ridiculous to ask the Palestinians to lay down their weapons when the Israeli state is fully militarized and uses every opportunity to use force.

But this is not to say that, in all cases, the use of violence is the right tactic to win a struggle.

In 1992, the urban poor of Los Angeles rioted after police officers who beat Rodney King--an act of violence caught on videotape and broadcast around the world--were acquitted. Ordinary people did not hesitate to use violence in their anger against police in particular and racism in general. In this case, however, the use of violence, while justified, was not the right tool to win the larger objective of ending racism.

On the other end of the spectrum, if, in the early 1970s, Chile's socialist President Salvador Allende had allowed workers to arm themselves, the outcome of the 1973 military coup led by Gen. Augusto Pinochet could have been very different.

So while it is important to support the struggles of the oppressed, it is also important to debate about the tools that will actually help win those struggles. Violence may well be one of those tools, but in many instances, it may not.

As a socialist, I believe that we will need a workers' revolution to get rid of capitalism. As a socialist, I am also opposed to violence. After all, I am trying to fight for a world without wars, starvation and brutality. (I am not, like Bush and Obama, fighting wars in order to...er...fight more wars).

So is this a contradiction? I don't think so.

The reason workers need to be prepared to defend themselves against violence is not because they will look cool sporting AK-47s during the revolution, but because the opposite side will be armed to the teeth. Capitalists will not give up their power willingly or as a matter of charity. Anyone who has seen the riot police in action during demonstrations demanding far less than a new society knows this.

Capitalism will not go with a whimper--it will fight to defend its immense wealth and illegitimate privileges.

But what happens if we win? Will we need armies and police to maintain workers' rule. No. And the reason is simple: Workers' rule over society will not be the rule of a privileged minority over an impoverished majority. It will be the rule of many in the interest of many.

When the vast majority of people of this world decide to democratically redistribute the planet's resources to give to themselves free housing, free education, free health care or free child care, I doubt they will be needing riot police against thousands demanding an end to such "violent" measures.