The imperialist scramble for Libya

The U.S. blitz on Libya is aimed at imposing the imperialist order, not saving lives.

THE CRUISE missile liberals are back. The same people who criticized George W. Bush for unleashing the U.S. war machine on Iraq are now cheering Barack Obama's order to pound Libya with missiles and bombs.

How do they explain the difference? The Republican Bush's venture was aimed at furthering the interest of U.S. imperial power, we're told, while the Democrat Obama's firepower will save civilian lives and promote democracy. "Assuming that a no-flight zone can be imposed by an international coalition that includes Arab states, we have an opportunity to establish a new narrative of Western support for Arab democrats," wrote Anne-Marie Slaughter, a Princeton professor and a former official in the Obama State Department.

Tell that to the families of the uncounted civilians who died not at the hands of Libyan government forces, but as a result of U.S. air strikes. While the media highlighted the destruction of tanks and weapons of forces loyal to Libyan leader Muammar el-Qaddafi, bombs dropped from the sky and missiles fired from ships offshore inevitably killed civilians--some of whom may have been supporters of the anti-Qaddafi rebellion. 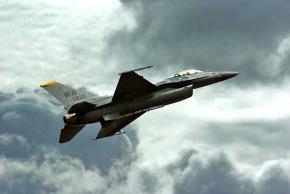 In fact, U.S. Marines sent to rescue the crew of a crashed F-15 fighter jet reportedly shot six villagers near Benghazi who were trying to help the pilots--and now a boy faces the amputation of his leg as a result of the "rescue."

Moreover, military action by the U.S., Britain and France--likely soon to be endorsed by the whole NATO alliance--will likely do little to stop the killings of civilians carried out by Qaddafi's forces.

The regime's military and mercenary fighters quickly adjusted to the air strikes by avoiding large concentrations and stepping up their attacks on civilians and rebels in urban areas. Western air power can't be used in those densely populated zones without slaughtering the very people they claim to want to protect.

But none of that gives pause to the liberal imperialists, who want to bomb like it's 1999. That was the year that the U.S. and NATO launched a war on Serbia in the name of protecting the Albanians in what was then the Serbian province of Kosovo. Since then, the Kosovo war has been held up as the model for "humanitarian intervention"--a war that cost no lives on the allied side and eventually gained independence for an oppressed people.

In reality, the U.S. and its allies manipulated the legitimate struggle of the Kosovars to their own end. The bombing campaign was a prelude to the use of ground troops by the U.S. and NATO to forcibly separate Kosovo from Serbian control, expanding the U.S. military's presence in the former Yugoslavia. Kosovo became the location of Camp Bondsteel, the biggest U.S. military outpost in Southeastern Europe and the location of a secret prison during the "war on terror" that a European human rights official called "a smaller version of Guantánamo."

Kosovo today remains desperately poor, with 40 percent unemployment and 45 percent of the population living under the official poverty line. It is a corrupt client state of the U.S. and European powers, run by Mafia-style politicians who have been implicated in a scheme in which Serbian prisoners of war were murdered in order to sell their organs for transplant.

But at least the NATO intervention in Kosovo saved lives, right? Not according to University of Arizona professor David Gibbs, author of a book on Western intervention in the former Yugoslavia:

Another myth regarding Kosovo is that bombing improved the human rights situation. In reality, it made things worse, and augmented the suffering.

Prior to the NATO campaign, the total number of people killed on all sides in the Kosovo conflict was 2,000, approximately half of whom were killed by Serbian forces. After the bombing began, however, there was a huge spike in Serb-perpetrated atrocities, which caused almost 10,000 deaths, combined with widespread ethnic cleansing. The Serbian forces were furious that they could not stop the NATO air attacks, so they took out their frustration on the relatively defenseless Albanians, causing a huge increase in the number of killings. The NATO bombing itself directly killed at least 500 civilians. When viewed from a humanitarian standpoint, NATO intervention was a disaster.

There is a danger that the current intervention in Libya could produce similar results.

THE QUESTION now is whether the U.S.-NATO intervention in Libya will follow the Kosovo pattern--perhaps with the imperialist powers sending ground troops to defend rebel-held cities in eastern Libya and effectively partitioning the country.

If they fail to do so, and Qaddafi remains in power, Western powers will be humiliated. But if they do intervene with ground troops, they will become occupiers, just as the U.S. and its sidekicks are in Iraq and Afghanistan at a moment when revolutionary pressures keep building on tottering U.S.-backed regimes in Yemen and Bahrain.

This dilemma led to squabbling in the imperialist camp as soon as the first missiles hit Libya. Britain and France, which had urged Washington to join them in calling for United Nations backing for a no-fly zone, suddenly turned squeamish about taking over the military and political lead from the U.S., as Obama promised they would.

French President Nicholas Sarkozy, keen to rehabilitate France's image as a great power, wanted a French-British leadership of the operation. But British Prime Minister David Cameron, leery of a political backlash at home and abroad, wanted to hide behind the NATO alliance. Obama obliged and pushed for NATO support of the war, which the alliance is expected to support when it meets March 24.

But whatever their differences, the U.S. and European imperialist powers are united in the view that the revolutions sweeping the Arab world must be contained and rolled back.

The Obama administration was initially inclined to let Qaddafi play a leading role in this counterrevolution. After all, Qaddafi, once a pariah in the West, has in recent years been rehabilitated as a reformer, and plied with weapons and handed lucrative business deals. Key U.S. and Western politicians were prepared to stand aside as the repression continued.

The ugly truth is that U.S. behavior regarding Libya differed little, whatever its rhetoric to the contrary, from the green light it gave--and continues to give--to its closer allies in Bahrain and Yemen to mimic Qaddafi and try to drown their own opposition in blood.

But the scale of the massacres carried out by Qaddafi's troops and the prospect of a long war, a refugee crisis and a disruption of oil supplies also put pressure on the U.S. to intervene. Once a few Arab states signed on, Obama launched his war.

If the Obama administration's rhetoric about saving Libyan lives sounds noble, recall that George W. Bush declared that the U.S. was going to war in Iraq "not to conquer but to liberate"--and he trumpeted the U.S. military's role in "empowering" Afghan women.

As Harvard professor Stephen Walt noted, the Bush neoconservatives and the Obama pro-intervention liberals may disagree tactically on how best to use U.S. military power, but they agree that the armed forces must be used to further U.S. aims:

The only important intellectual difference between neoconservatives and liberal interventionists is that the former have disdain for international institutions (which they see as constraints on U.S. power), and the latter see them as a useful way to legitimate American dominance...

Most of the U.S. foreign policy establishment has become addicted to empire, it seems, and it doesn't really matter which party happens to be occupying Pennsylvania Avenue.

THAT FOREIGN policy establishment, whether neocon or liberal interventionist, now seems intent on seeing a "new Libya" that conforms with the same old objectives of U.S. imperialism.

The editors of Middle East Report summed up the U.S. perspective perfectly:

The reiterations by Obama and his British and French counterparts that "Qaddafi must go" put Western prestige on the line. So, say events proceed as the West appears to hope and the rebels somehow manage to dislodge the colonel. Or say the U.S.-British-French troika deals the death blow itself. What then? Who will emerge to reconstruct a strong, central state? Who will the West back from among the rebels' disparate ranks?

As the veteran journalist Patrick Cockburn contends, it is likely to be those "who speak the best English" and are "prepared to go before Congress to express fulsome gratitude for America's actions." One might add that they are apt to be the most willing to give favorable terms to Western oil firms for invigorated exploration and exploitation of the country's hydrocarbon deposits.

Whether scions of the royal family deposed by Qaddafi in 1969 or renegades from the colonel's subsequent regime, these elements are sure to be heavier on opportunism than on popular legitimacy. This Libya would look nothing like the democratic state of liberal interventionist dreams, and quite a bit like post-Saddam Iraq.

Such an outcome in Libya would provide the U.S. with a firewall to try and stop the revolutionary wave emanating from Tunisia and Egypt. Whether Washington and its allies can achieve that aim is an open question, given the fallout from Libya's civil war and the precarious state of the U.S.-backed regime in Yemen, another key outpost in the "war on terror."

But one thing should be clear already: The U.S. intervention in Libya has nothing to do with meeting humanitarian goals, and everything to do with reasserting Western domination in a region that has long suffered the effects of colonialism and imperialism.