Elizabeth Schulte describes the bone-chilling history of America's assassins in the aftermath of their latest--but certainly not their first--kill in the Middle East.

THE NEW York Times read more like a Cold War spy novel than the "newspaper of record" when it came to describing the assassination of Osama bin Laden on May 1.

Its reporters breathlessly narrated events in the White House Situation Room--complete with a flurry of acronyms and code names, including Geronimo for bin Laden, apparently designated with no recognition of how insulting this was to Native Americans. According to the Times, CIA Director Leon Panetta spoke to the room via video screen, describing Osama bin Laden's killing as it unfolded in Abbottabad, Pakistan:

"They've reached the target," he said.

"We have a visual on Geronimo," he said.

Enemy Killed In Action. There was silence in the Situation Room.

Finally, the president spoke up.

Barack Obama, Hillary Clinton, Joe Biden and the rest together cheered the murder of bin Laden--and days later, the congratulatory backslapping hasn't stopped, from the special nationally televised announcement on Sunday night through the never-ending media frenzy reporting every gruesome detail of the assault. 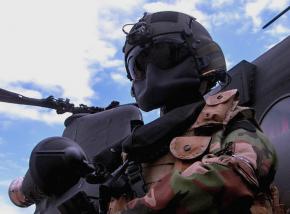 What Obama meant by "nothing we can't do" is that the U.S. government can go absolutely anywhere in the world to assassinate anyone it chooses--or for that matter, bomb or occupy any country that suits U.S. foreign policy interests.

The U.S. government is above the law and above reproach, period--Obama didn't use these words, but that was the crystal clear message from him and other U.S. leaders in the past few days.

Actually, the message should be familiar. We heard it 10 years ago from George W. Bush, who promised that Osama bin Laden would be taken out, like the "old poster out West that says, 'Wanted: Dead or Alive.'"

But this time, it's not a dimwitted Republican cowboy promising rough frontier justice. It's a liberal Democrat, and a Nobel Peace Prize winner to boot.

A MORE clear-headed look at what happened on May 1 reveals a less heroic and more bloodthirsty story--bin Laden, the one-man global threat who gave the U.S. government's "war on terror" its reason for being, wasn't even armed when a U.S. Navy SEAL shot him dead. Nor was it the case, as originally reported, that he used his wife as a human shield. But the SEALs shot her anyway.

A quick burial at sea in the middle of the night, and it's another so-called victory for U.S. democracy--with no investigation, no trial and no testimony, just "public enemy number one" dumped in a watery grave.

No risk that bin Laden might say anything harder to explain later--such as his past ties to the U.S. government, working with the CIA in the 1980s to build up an ultra-fundamentalist Islamist presence in Afghanistan to resist the invasion of the country by the former USSR.

Even former Iraqi dictator Saddam Hussein had a trial of sorts--a trumped-up, U.S.-choreographed show trial, though carried out in the name of "the Iraqi people." But afterward, there was the leaked video of Saddam's botched execution by hanging--more Old West-style justice--that inspired even George W. Bush to comment that he wished Saddam Hussein "had gone in a more dignified way."

Of course, the difference between these two enemies of the U.S. is that Saddam Hussein, unlike bin Laden, was an actual head of state.

Totally different...or is it? The fact of the matter is that the U.S. government has a long and sordid history of carrying out political murders that no other country could dream of--liquidating the leaders of other countries, including former allies, when they got in the way of U.S. interests.

You can call it "regime change" or assassination or something else. It amounts to the same thing--in the name of upholding the empire, the U.S. government has never been afraid to use trained killers whose actions would shock the Mafia's Murder, Inc.

There was another example of a political hit that was overshadowed by bin Laden's a day later--Libyan leader Muammar el-Qaddafi was targeted for assassination by the West. NATO missiles struck Qaddafi's home in Tripoli on April 30, killing his youngest son and three grandchildren under the age of 12.

U.S. officials wouldn't officially comment on the NATO bombing, but stood by the claim that the house was a "legitimate military target." How that could be the case when the U.S.-led air assault on Libya was justified as a "humanitarian" measure to save civilian lives from Qaddafi's forces was never clarified.

This isn't the first time that the Libyan leader has been a target of a U.S. hit job. Between 1980 and 1986, the U.S. attempted to assassinate Qaddafi on several occasions. In 1986, a U.S. air strike against Qaddafi resulted in the deaths of between 40 and 100 Libyan civilians, among them the Libyan president's infant daughter.

More recently, Qaddafi had become a dictator the U.S. could tolerate and do business with. But now he's a target once again.

The U.S. helped anti-communist Ngo Dinh Diem become president of the Republic of Vietnam in 1955. Once in power, Diem presided over a corrupt and brutal regime, which the U.S. portrayed as a fierce bulwark against the communist threat in Vietnam. Diem served well as a loyal puppet, working hand in glove with the CIA to terrorize any and all opposition.

But this came to an end in 1963 when Diem, proving incapable of defeating rebellions in the South, outlived his usefulness to the U.S. He and his brother Nhu, the head of the secret police, were assassinated in a coup orchestrated by the CIA and U.S. Ambassador to South Vietnam Henry Cabot Lodge.

If the U.S. government is ruthless against former allies, it reserves special brutality for forces that undermine its influence around the globe.

Patrice Lumumba immediately drew the attention of the U.S. when he became the first prime minister of the newly independent Congo in Africa in 1960. At Independence Day ceremonies, Lumumba said:

Our lot was 80 years of colonial rule...We have known tiring labor exacted in exchange for salary which did not allow us to satisfy our hunger...We have known ironies, insults, blows which we had to endure morning, noon and night because we were "Negroes"...

The U.S. government was determined not to let this stand. Attempts on Lumumba's life included importing a lethal virus that was supposed to produce a fatal disease indigenous to the Congo.

In 1975, the Church committee went on record with the conclusion that [CIA Director] Allen Dulles had ordered Lumumba's assassination as "an urgent and prime objective" (Dulles's words). After hearing the testimony of several officials who believed that the order to kill the African leader had emanated originally from President Eisenhower, the committee decided that there was a "reasonable inference" that this was indeed the case.

In the end, the CIA helped Mobutu Sese Seko capture Lumumba and turn him over to his opponent, Moise Tshombe. Lumumba was assassinated on December 1, 1961. Mobutu took power in 1965, ruling with an iron fist until 1997.

The list of world leaders that have become the target of the U.S. government and its Murder, Inc., is long and includes: Iran's Mohammad Mosaddegh, Chile's Salvador Allende, Indonesia's Sukarno, Cuba's Che Guevara, India's Jawaharlal Nehru and Panama's Manuel Noriega.

While the CIA's sordid history may make it seems as if it's an agency out of control, the people at the top know precisely what they're doing. Former CIA agent Philip Agee explained the CIA's role in his 1975 exposé Inside the Company: CIA Diary:

Lately, the U.S. government's covert assassins haven't been so covert, as the Obama administration goes boldly over the globe to attack targets in the "war on terror." In all this, the White House can count on the backing of Obama's liberal supporters. Consider the New York Times, which until recently condemned the Bush administration's justification of torture and its "extraordinary rendition" program in the interrogation of "war on terror" suspects.

Not any more, to judge from this front-page story:

For an intelligence community that had endured searing criticism for a string of intelligence failures over the past decade, Bin Laden's killing brought a measure of redemption...

The raid was the culmination of years of painstaking intelligence work, including the interrogation of CIA detainees in secret prisons in Eastern Europe, where sometimes what was not said was as useful as what was.

But while the administration bathes in the glory of its recent assassination, there are others who, though they oppose bin Laden's views, are appalled by the carnival of patriotism and hate whipped up after his murder. Many more say they feel no more safer today after bin Laden's death than they did a few days ago--the latest New York Times/CBS News poll found only 16 percent felt more safe.

With its recent assassination success, the Obama administration aims to prop up and extend--not end--its worldwide war on terror. Which means more assassinations and more wars abroad. We have to oppose all these efforts--and make it clear that the U.S. government is the real danger, to people in this country and around the world.