Cashing in on the charters

Petrino DiLeo exposes a new attempt by Wall Street to make money off our schools.

THE SCHOOL privatization movement took an ominous new step in June with the creation of the first for-profit real estate investment fund aimed at the construction of charter schools.

The financial venture, if it works according to plan, will accelerate the charterization process by funding the development of up to 75 charter schools across the country within the next few years. Charter schools mostly get their funds from the public education, but they are run by private organizations, including numerous for-profit ventures--which has made them a favorite tool in the new attack on teachers unions.

With the claim that "securing suitable learning facilities" is one of the greatest challenges facing the charter school movement, the Canyon-Agassi fund is aiming to raise up to $300 million in equity. The plan is for the fund to take on additional debt and invest up to $750 million to build charter schools. 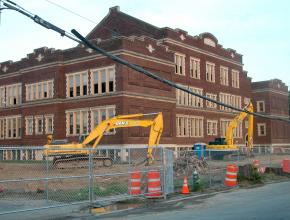 Its first venture will be located in North Philadelphia's Allegheny West community and is scheduled to open in August 2011. Canyon-Agassi also hired Glenn Pierce, the former president and CEO of Pacific Charter School Development, to oversee day-to-day operation of the fund.

The fund won't run charters schools. Instead, it plans to generate returns exclusively on the real estate side of the equation.

The plan is to acquire sites and develop or redevelop them into charter schools, which will then be run by third-party operators. The fund hopes to make money through a combination of rents paid by charter school operators, and whatever sale price is paid for the buildings when the fund unloads them in several years.

By focusing on real estate development, rather than operations, Canyon-Agassi will be able to move quickly in constructing new facilities (or buying existing school buildings that can be turned over to operators).

Even if the charter school operators with which the fund teams aren't for-profit enterprises, the fact that Canyon-Agassi is seeking to generate returns for investors means the venture is introducing the profit motive into the education equation. It's all too clear that the charter schools involved--rather than providing "education reform"--will have to focus on taking in more money than they spend on students.

In other words, forget the charter school promise of new school books or maintaining teacher salaries. A portion of public money funding charters will be paid out in rents so that wealthy investors can get their returns and Wall Street banks can get their loans paid back.

That can only increase pressure on teachers and their unions. Paying good salaries and benefits and providing good teachers' contracts will cut into the profitability of schools and their ability to pay rents.

There are additional troubling implications. With the budget crunch hitting all levels of government and leading to calls to reduce deficits and impose austerity from both Democrats and Republicans, the fund could play into the broader trend of privatization of government assets. Local governments could face pressure to raise cash fast by selling buildings they own to a fund like this.

In New York state, for example, Mayor Michael Bloomberg and Gov. Andrew Cuomo have already mounted an offensive to close "underperforming" public schools. Selling those facilities off to a fund such like Canyon-Agassi could end up being an additional incentive for New York political leaders to accelerate the process.

HOW WILL the fund make money?

Real estate investment funds like generate returns through two means: rental income off the property itself and the eventual sale of the property--preferably, of course, for more than what it cost to acquire or build the facility.

Typically, a fund like Canyon-Agassi have return-on-equity target of greater than 20 percent--or else it can't expect to attract investors.

So while Canyon-Agassi claims it will charge "affordable rents," there's no way to do so and still hit its lofty goals. Plus, it will likely supplement any rents it collects with additional fees charged to the charter operator.

Should we care if a union-busting charter operator gets bilked in this process? Yes--because ultimately, public money will be the chief source of returns for the fund.

This shows the true aim of charter schools--they won't be run in the interests of students, but to meet the needs of charter operators to be profitable, in order to pay off their lenders and landlords.

According to the initiators of the Canyon-Agassi fund, facilities built with its money would be sold within four to six years to their operators. In that short timeframe, the fund will need to recoup its initial investment, cover its debt costs and meet its profit target through a combination of rents, fees and the final price paid for building.

It seems highly unlikely that charter schools themselves would have the necessary cash to acquire the buildings in a timeframe as short as four to six years. Thus, they would need some alternative form of financing to pay back the fund. In its release, the Canyon-Agassi fund explained that it expects to help charter operators line up financing using "new market tax credits, tax-exempt bond offerings or funding from the U.S. Treasury's Community Development Financial Institutions Fund."

In other words, wealthy investors taking part in this fund will put in money up front to build charters and then get their money back--plus a juicy return--almost entirely from the public coffers, whether it be state-level education funds or federal money available to Wall Street. Plus, since the fund will eventually seek up to $450 million in debt, Wall Street and other financial backers will gain access into the charter school movement through the back door.

FUNDS LIKE Canyon-Agassi are promoted with language that passes them off as some kind of socially responsible investment. But at the end of the day, their goal is to generate returns for their investors--nothing more.

The money behind this venture--Canyon Capital Realty Advisors--has a long history of funding commercial real estate ventures in the guise of economic development. For example, Canyon has been a long-time partner to Magic Johnson and has made a mint helping the former NBA star build Starbucks, movie theaters, restaurants, banks and urban malls across the nation.

So what are the dollars and cents for Canyon-Agassi? Basically, a fund backed with $300 million in cash with a six-year exit strategy and a 20 percent return-on-equity target is seeking to generate about $60 million in cash each year and be able to pay back the $300 million at the end of its life. To help do this, the fund's backers say they'll borrow up to $450 million--which will enable it to build more schools, more quickly. If that debt carries a 5 percent interest rate, it would have roughly $135 million in interest costs in six years.

Add that all up, and the fund would need to generate--through rental incomes and cash paid for the buildings--roughly $1.3 billion to pay its debts, pay back its investors and hit its promised return targets. And that's excluding whatever fees or other payments the fund managers are aiming for.

That's ultimately what the fund is about. Behind Agassi's name, the real money lined up for the fund so far includes stakes from Citigroup, Intel and the Ewing Marion Kauffman Foundation.

In the end, the invention of this fund--and if it's successful, others will surely emulate the strategy--shows that proponents of education reform really don't care about improving education. In reality, they're looking for ways to open up public education to the free market--and create another way for corporations, Wall Street and wealthy investors to profit off the public.