The war crimes that followed September 11

During the commemorations of September 11 this week, it's up to everyone dedicated to peace and justice to honor the victims of the U.S. "war of terror."

AFTER THE attacks of September 11 in New York City and Washington, D.C., Socialist Worker produced a special edition of our newspaper with the front-page headline, "Don't turn tragedy into war."

But of course, the Bush administration did just that--first with the invasion of Afghanistan, and then Iraq. One decade later, those wars have spawned countless tragedies of their own, throughout the Bush years and continuing into the presidency of Barack Obama.

The scale of the state-sponsored terrorism that took place after September 11 will never be known in its entirety--precisely because its scope is so vast.

At the end of August, for example, an unclassified diplomatic cable made public by WikiLeaks focused attention on another little-known atrocity of the U.S. war on Iraq--when American troops executed 11 Iraqi civilians in a house in the town of Ishaqi in 2006, and then called in an air strike to destroy the evidence.

What made this incident different from so many hundreds of others was that a U.S.-trained Iraqi police colonel and other high-ranking officials were willing to talk on the record about the massacre, even though it cast U.S. troops in an unfavorable light. Iraqi television stations reported on the incident, and that triggered a UN investigation. 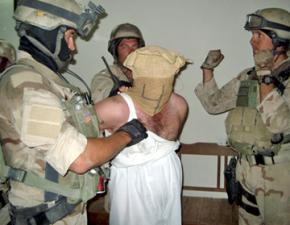 At the time, U.S. officials insisted that nothing improper had occurred. They claimed that a "militant" with ties to al-Qaeda in Iraq had been seized after the house he was hiding in was destroyed. But the evidence subsequently showed that U.S. troops entered the house, which belonged to a farmer, and then handcuffed and executed each of the occupants with a bullet to the head--five children who were all five years old or younger, four women and two men.

Twelve days after the murders, a UN investigator, Philip Alston, wrote a letter to U.S. officials asking for a formal explanation. According to a McClatchy news report, "Alston said that as of 2010--the most recent data he had--U.S. officials hadn't responded to his request for information, and that Iraq's government also hadn't been forthcoming. He said the lack of response from the United States 'was the case with most of the letters to the U.S. in the 2006-2007 period,' when fighting in Iraq peaked."

BUT THIS case of a massacre followed by a cover-up is merely an extension of the daily conduct of U.S. troops in Iraq, Afghanistan and elsewhere around the world.

A few years into the U.S. war on Iraq, investigative journalists Laila Al-Arian and Chris Hedges began interviewing U.S. soldiers about what they had witnessed while deployed. The mainstream media yawned, leading Project Censored to select Al-Arian and Hedges' reporting as one of the 25 most important under-covered news stories of 2008.

In fact, the stories that Al-Arian and Hedges unearthed could be grounds for countless war crimes prosecutions. Amid last month's revelations about the massacre at Ishaqi, Al-Arian described the stories she and Hedges heard from U.S. soldiers:

The scenes they described were terrifying: convoys of dozens of vehicles roaring down Iraqi roads, jumping medians, smashing into civilian cars and hitting Iraqi civilians without stopping to survey the damage. They described how the mechanics of war--home raids, convoys, patrols, detentions and military checkpoints--led to the daily abuse and killing of innocents. How the killing of civilians became routine, how rules of engagement changed all the time, and how there was a culture of impunity in the military when it came to noncombatant deaths.

"Better to be tried by 12 than carried by six," many said. Better, in short, to kill than be killed.

The same pattern holds in Afghanistan--wrongly considered to be the morally justified "good war."

In the fall of 2010, for example, reports surfaced of a self-appointed "kill team" made up of 12 U.S. soldiers from the 5th Stryker Brigade. Five of the 12 soldiers were accused of killing Afghan civilians "for sport" in three separate incidents, and seven were implicated in the cover-up.

But according to Gen. Stanley McChrystal, now retired, but previously the commander of U.S. forces in Afghanistan, the day-to-day operations of the U.S. military killed far more civilians:

We've shot an amazing number of people and killed a number, and, to my knowledge, none has proven to have been a real threat to the force...To my knowledge, in the nine-plus months I've been here, not a single case where we have engaged in an escalation of force incident and hurt someone has it turned out that the vehicle had a suicide bomb or weapons in it, and in many cases, had families in it.

BUT DIDN'T the U.S. have to go to war against Afghanistan? Following the September 11 attacks, Republican and Democratic politicians alike united insisted that war was the only course of action.

In fact, the invasion of Afghanistan was every bit a war of choice as the invasion of Iraq. As the commemorations of September 11 and the launching of the "war on terror" take over the headlines this weekend, remember these three facts.

First, 15 of the 19 hijackers who carried out the September 11 attacks were from Saudi Arabia. None were from Iraq or Afghanistan. During a trip to Saudi Arabia in early 2007, George W. Bush acknowledged as much:

There's a lot of really good people here. Look, you can't deny the fact that some, a majority, of the terrorists came from Saudi, but you should not condemn an entire society based upon the actions of a handful of killers.

But that's precisely what the U.S. did when it declared war on Afghanistan.

Second, Afghanistan's ruling Taliban offered to hand over al-Qaeda's Osama bin Laden before the U.S. bombing campaign began on October 7, 2001--on the condition that Taliban leaders be provided with evidence of bin Laden's involvement in the September 11 attacks, and that bin Laden be handed over to another country for trial.

Ten days after the bombing began, the Taliban again offered to hand over bin Laden, this time without being provided with evidence. The Bush administration rejected this also. "There will be no negotiations," White House Press Secretary Ari Fleischer said at the time. "The president is not pursuing such a course because he does not think it would be constructive."

For once, the professional liar Fleischer was telling the truth. The Bush administration didn't think negotiations would be "constructive" because it wanted war--to pursue larger U.S. economic, military and geopolitical aims in the region. Capturing bin Laden served as the pretext for this larger agenda.

Third, that agenda had already taken shape before the September 11 attacks. The Clinton administration and even the Bush administration had largely considered the hard-line Taliban a stabilizing force in Afghanistan, for reining in opium trafficking and imposing law and order, which made it safer to do business in the region.

In early 2001, the Bush administration was negotiating with the Taliban over the proposed construction of a Central Asia pipeline by Unocal, as a way of challenging Russia's long-standing control over the region's energy resources.

But Taliban officials wanted a greater share of the wealth, angering U.S. officials. "At one moment during the negotiations, the U.S. representatives told the Taliban, 'Either you accept our offer of a carpet of gold, or we bury you under a carpet of bombs,'" wrote Jean-Charles Brisard, author of a book about bin Laden published in French.

According to a Pew Research Center poll conducted in August:

In answer to the notorious question, "Why do they hate us?" respondents were generally more willing today to believe that U.S. policies in the Middle East might have motivated the attacks by al-Qaeda. Immediately after the attacks took place, a majority of respondents (55 percent) rejected that notion, while only a third agreed. Ten years later, the public's views are more evenly divided, with 43 percent agreeing with the proposition that the attacks may have been motivated by something "the U.S. did wrong in its dealings with other countries," and 45 percent in disagreement.

At the same time, however, the number of respondents who think that the September 11 attacks signaled "the start of a major conflict between the people of America and Europe versus the people of Islam" as opposed to "a conflict with a small radical group" has grown from 28 percent in October 2001 to 35 percent today.

Actually, the facts speak for themselves. It's the U.S. government that has relentlessly pursued a war against "the people of Islam," not the other way around--and not because of religion, but because predominantly Arab and Muslim countries occupy areas of the world that are the source of capitalism's most vital resource: oil.

The pursuit of this commodity by successive American presidents has spawned a century of economic blackmail, support for pro-American coups and military interventions. From the backing of the Shah of Iran to the Egyptian dictator Hosni Mubarak to the Saudi royal family--not to mention Washington's support for Israel and its colonial dispossession of the Palestinians--the U.S. has earned the contempt of Arabs and Muslims enduring the repression of American-backed tyrants.

Today, the revolutions and uprisings in North Africa and the Middle East represent, in part, a reaction to the lack of any change in this situation--despite the election of Barack Obama, with his promises of ending U.S. wars and respecting the Arab world. Instead, Obama doubled the number of U.S. troops in Afghanistan and escalated the drone aircraft attacks on Pakistan, Yemen and Somalia--while continuing the Bush-era policy of torturing prisoners at Guantánamo Bay.

The media will spend the next week "honoring the victims of September 11." But we have to remind everyone who wants real peace and justice of all the victims whose lives have been destroyed by the U.S. "war of terror."