Lily Hughes, of the Campaign to End the Death Penalty, reports that the Texas death penalty system is running at full speed, despite growing awareness of its flaws.

THE EVENING of September 15 found Texas Gov. and Republican presidential hopeful Rick Perry partying it up with his buddy Donald Trump at Fall Fashion Week in New York City.

Back in Texas that night, Duane Buck sat in his cell awaiting the walk to the death chamber. He had eaten his final meal and the scheduled time for his execution had come and gone. In a few short hours, his death warrant would expire--and he sat awaiting a final decision from the U.S. Supreme Court on whether he would live or die.

Buck's lawyers had been appealing for a stay of executions for days based on the fact that during the sentencing phase of his trial, a psychologist argued he was a continuing danger to society simply because he was Black.

The Texas Board of Pardons and Paroles had denied clemency, and there was no indication that Perry would step in to grant a reprieve. It was left to the U.S. Supreme Court to step in at the last minute with one small measure of justice--to stop Buck's planned execution with only hours to go. 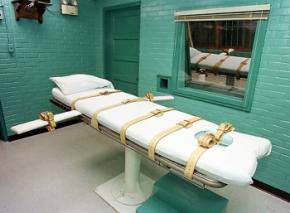 Buck's execution was the second scheduled for that week in Texas, and among four scheduled over a 10-day period in September, including the executions of Cleve Foster and Lawrence Brewer planned for September 20 and 21.

Steven Woods was put to death on September 13--despite the fact that another man had confessed to committing the murders that had put Woods on death row.

As he lay on the table in the execution chamber, Steven Woods said these words:

You're not about to witness an execution. You are about to witness a murder. I am strapped down for something Marcus Rhodes did. I never killed nobody, ever. Justice has let me down. Somebody completely screwed this up. Well, Warden, if you're going to murder someone, go ahead and do it. Pull that trigger.

But we know that those words won't give any pause to Rick Perry.

PERRY HOLDS the record for the number of execution--235 men and women have been killed in Texas under Perry's reign, surpassing his predecessor George W. Bush, who oversaw the executions of 152 people.

Perry is proud of his record as the country's leading executioner. At a recent Republican presidential candidates' debate, NBC News' Brian Williams asked Perry whether he lost any sleep at night, worrying that he might have executed an innocent person. After waiting for the right-wing audience's grisly applause for the Texas execution machine, Perry declared:

Without actually saying it, Williams was plainly asking about the case of Cameron Todd Willingham, who was executed on Perry's orders in 2004. Perry caused a scandal by doing everything in his power to subvert the "very clear process" of review warranted by the evidence in the case.

Willingham's execution--for allegedly starting a fire that killed his three children--has haunted Perry over the last few years. Forensics experts who examined the evidence believe it shows there was no arson.

That evidence was presented to Texas authorities in the days before the execution, but they chose to ignore it. Perry himself maintained that Willingham was guilty and a "monster." To maintained the charade, Perry worked to squash a posthumous investigation by the Texas Forensic Science Commission, firing the head of the commission on the eve of a hearing and installing a more pliable appointee.

Perry's state attorney general recently issued a ruling that greatly narrows the commission's jurisdiction over the Willingham case in particular.

But even if Perry manages to stop the official investigation into the evidence that condemned Willingham, the damage has been done. Perry's actions in the case are widely seen as a cover-up and have once again cast a national spotlight on the Texas death penalty system.

THERE ARE several other Texas death penalty cases that will continue to call into question the "thoughtfulness" of the execution system in Texas over the coming months.

The two executions this week are just the beginning. Cleve Foster is scheduled to die on September 20 despite an audio confession from his codefendant Sheldon Ward taking sole responsibility for the crime. Ward died of cancer on death row last year.

In the execution planned for the next day, Lawrence Brewer is one of two men convicted in the infamous dragging death of James Byrd in Jasper, Texas in 1998. Brewer and John King were members of a white supremacist group at the time of the racially motivated murder.

But there's one big problem with this claim: the facts. At this time, King and Brewer are the only two white men on Texas' death row convicted of killing a Black person--and there has been only one other white man in Texas sentenced to death for the murder of a Black person since the death penalty was reinstated a quarter century ago.

Two other Texas death row cases center around new testing of DNA evidence. Hank Skinner has an execution date of November 9, and Larry Swearingen execution' was stayed last year by the Texas Court of Criminal Appeals (CCA), which recently ruled against him.

The CCA ruled against Swearingen despite a DNA test that has excluded him as the perpetrator in the crime he is accused of--other forensic evidence suggests he was in jail at the time of the killing.

In Hank Skinner's case, he recently applied to the U.S. Supreme Court for the right to sue in civil courts for new DNA testing--because the criminal court system claims he forfeited his right to such testing by not asking for it at the time of his trial. His lawyers are fighting for a stay of execution until his suit for DNA testing can be heard.

Why deny Hank Skinner new testing if it can show that he's innocent? Texas authorities are desperate to avoid answering that question. They face a real crisis of legitimacy for the death penalty system.

That crisis has had an impact. While polls still show majority support for executions in Texas, the margin of support has been steadily declining over the last 10 years. The number of death sentences handed down by juries has dropped dramatically as well. In each legislative session, there are dozens of bills calling for abolition or other progressive justice system reforms--a sharp contrast to 10 years ago when an abolition bill would never have a chance of being introduced.

Yet for the most part, Texas politicians are ignoring this growing sentiment against the death penalty. It's clear that Rick Perry has no intention of slowing down his death machine--unless we make him. In 2007, anti-death penalty activists pressured Perry to stop the execution of Kenneth Foster Jr., winning a historic commutation from the "governor of death."

That victory showed that Perry and the politicians in Texas can be forced to do the right thing--when there is enough public outcry and sustained pressure to make them.