The new sparks of labor resistance

There's a new surge of labor struggles in the U.S.--and what unites them is the activism and solidarity on display, despite a hostile media and aggressive employers.

PICKET LINES are popping up with greater frequency across the U.S.--and strikers are displaying a new, fighting mood that exists among growing numbers of working people fed up with being forced to pay for an economic crisis caused by Wall Street and Corporate America.

These struggles represent a challenge and an opportunity for working-class activists and socialists to put forward a strategy for taking on Corporate America and the business-backed attack on public-sector workers.

The struggles are varied. They include teachers who defied a judge's order to win a strike in Tacoma, Wash.; hospital workers who struck the Kaiser health care system in California for two days, with nurses honoring the walkout; professors on the picket line at Long Island University in New York; Hyatt hotel workers carrying out a weeklong strike at six hotels in four cities; members of the International Longshore and Warehouse Union (ILWU) blocking trains filled with scab cargo at the port of Longview, Wash.; a strike at the Central Park Boathouse restaurant in New York City against a notorious union-buster; and the beginnings of a campaign by postal workers' unions against the assault on their members at the U.S. Postal Service. 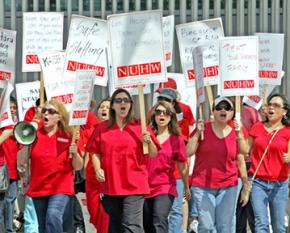 All this follows the two-week strike at Verizon in August, where roving pickets and demonstrations at the company's wireless stores caught management by surprise--and, earlier this year, the uprising in Wisconsin against Republican Gov. Scott Walker's union-busting attack on public-sector workers.

Workers haven't yet prevailed in all of these struggles, nor will all of them win in the future. But what unites these fights is the activism and solidarity on display, despite a hostile corporate media and aggressive employers.

Labor's new sparks of resistance are proof positive that the defiant spirit of the battle in Wisconsin last winter wasn't a flash in the pan, but a sign that growing numbers of working people are rediscovering their capacity to struggle. After decades of a one-sided class war, the fightback has begun.

TO BE sure, the battles ahead will be tough. More than 90 percent of workers in the private sector lack any union at all. And when nonunion workers try to organize, they must contend with labor laws stacked in favor of management.

For their part, public-sector workers, until now a relative stronghold of organized labor, face a blitzkrieg attack by both Republican and Democratic politicians who demand sweeping cuts in pay and benefits in order to reduce budget deficits generated by Wall Street's financial catastrophe, tax giveaways to the wealthy and the endless wars in Iraq and Afghanistan.

And, of course, Corporate America, while enjoying record profits, is using persistent mass unemployment to extract yet more concessions from unions.

In the face of these attacks, the bulk of the union leadership has been unable or unwilling to offer a strategy for resistance.

Labor's two federations, the AFL-CIO and the breakaway Change to Win group, poured money and resources into the 2008 elections to support Barack Obama. They expected payback in the form of the Employee Free Choice Act (EFCA), proposed legislation that would make it easier to organize unions. Instead, Obama turned his back on the unions and bailed out the bankers, while EFCA went nowhere in a Democratic-controlled Congress.

While Obama is now talking up his jobs proposal and suggesting that taxes on the rich should go up, he's also imposed a pay freeze on federal employees, stood by while the U.S. Postal Service threatens massive layoffs and encouraged states to pass teacher-bashing legislation. Yet he can still count on the support of almost all top labor leaders.

Even worse, union officials have been willing to sell concession-filled contracts to union members, arguing that the financial realities and risks of striking are simply too great for workers to do anything else. Instead, they cling to their strategy of "partnership" with employers--on terms increasingly unfavorable to workers--and reliance on the Democratic Party.

Thus, in Wisconsin, where a Republican governor pushed through a law gutting collective bargaining rights for public-sector workers, union officials squandered the greatest labor mobilization in generations in favor of a strategy--ultimately unsuccessful--to end the Republican majority in the state Senate through recall elections.

In the Verizon strike in August, leaders of the Communications Workers of America and International Brotherhood of Electrical Workers announced that workers would return to their jobs without a contract, cutting short an active struggle that rekindled the spirit of Wisconsin by winning widespread support among union and nonunion workers alike.

And in the auto industry, the leaders of the United Auto Workers have announced a tentative contract with General Motors that consolidates previous union concessions--most importantly, the hiring of newer workers at a permanently lower tier wage. Workers at GM and Chrysler don't have the right to strike, thanks to the government-imposed bankruptcy and bailouts of those two companies.

Given the intensity of the anti-union offensive and the weak--or worse--response by union officials, the surge in labor struggles, whether in smaller localized forms or more broadly, are all the more significant.

The hope that the White House would usher in pro-labor policies is long gone--and the workers who are taking a stand today know that they have to rely only their own determination and wider workers' solidarity.

That's why Association of Flight Attendants member Lois Breece turned out on September 14 for the UNITE HERE union picket line at a Chicago Hyatt hotel. "Everybody's got to do their part to fight big corporations and to get something for working families these days," said Breece, who has taken a 38 percent pay cut since her employer, United Airlines, went bankrupt in 2002. "They promised shared sacrifice and shared reward. We haven't seen it."

THE CHALLENGE for labor activists--as well as working people who want to organize a union where there isn't one--is to tap into the rising anger and turn it into a fightback.

In unionized workplaces, the focus for organizing among rank-and-file members may be large, like a contract campaign that effects an entire union workplace--or more modest, like issues over scheduling and workloads. In nonunion workplaces, it could be management favoritism over pay and promotions or a vindictative supervisor that sparks an organizing campaign.

However the fights break out, their chances of winning are greater if they can draw on wider solidarity seen in Wisconsin. For example, while just 80 workers are involved in the strike at the Central Park Boathouse restaurant, their fight has become a focal point for labor and community activists around New York City, putting additional pressure on management.

In short: The greater the amount of activism and solidarity, the more leverage that workers can have.

That lesson is especially important in a fight like Verizon. Though the unions ended their two-week strike in August without a contract, the battle showed that workers have other options besides standing on the picket line and trying to last "one day longer" than multi-billion dollar corporations. During the strike, roving pickets of scabs and protests at Verizon Wireless stores damaged the company's brand and showed how unions in struggle can rally not only wider support within the labor movement, but also win the backing of nonunion workers.

While such activism is crucial to successful labor struggles, too often it's not enough, as employers mount scabbing operations intended to starve workers back to their jobs. That's why members of the ILWU took a bolder action, repeatedly blocking trains full of grain headed for a new terminal in Longview, Wash., where management is using scab labor. The longshore union defied police and the law--the kind of confrontation that's been all too rare in recent decades.

Meanwhile, teachers about 100 miles north, in Tacoma, Wash., also defied the law--by going on strike and then ignoring a judge's order to return to work. The Tacoma Education Association won that fight, forcing the district to retreat on pay cuts and drop a plan for arbitrary transfers--the first big win for labor in the new onslaught against public-sector unions.

More showdowns are coming. Chicago Mayor Rahm Emanuel--President Barack Obama's former right-hand man--is plotting an all-out drive to break the Chicago Teachers Union, and a strike is possible in the months ahead. Republican governors are trying to outdo one another as they slash away at public-sector workers' pay and benefits and gut their collective bargaining rights. The Democrats tolerate collective bargaining--but they want deep cuts, too. And of course, business is out to deliver a deathblow to unions, demanding cuts in pay, pensions and health care even when they're sitting on big profits.

That's why growing numbers of workers have drawn the conclusion that the attacks won't end until our side is strong enough to stop them. It's time to take the initiative and step up the fight.