Unequal under the law

For decades, Israel has waged war against Palestinians with the blessing of the world's chief powers in Western Europe and North America. Though the issues involved and the names of the players changed over the years, little else seemed to--until recently.

First, there was the global revulsion at Israel's barbaric assault on Gaza in late 2008-09, which spurred action on a boycott, divestment and sanctions (BDS) movement launched by Palestinian civil society in 2005. Israeli officials have termed this growing movement a "delegitimization" campaign and pledged to counter it.

Then there was Israel's murderous assault on a Turkish ship carrying humanitarian aid to the besieged people of Gaza, again creating an outpouring of sympathy for Palestinians from people around the world.

Now, the revolutionary uprisings in the Arab world have driven from power some of the U.S.-backed dictators, especially Egypt's Hosni Mubarak, who for years buttressed Israel in its domination of Palestinians. The winds of the Arab Spring have inspired a new mood of popular resistance in Palestine, while simultaneously prodding the leadership of the Palestinian Authority into action, such as pressing for statehood at the UN.

All of this has spurred Israel to pursue an aggressive pushback against its critics--requiring loyalty oaths from Palestinian citizens of Israel and passing laws to criminalize advocacy of BDS--in an effort to secure its grip on the region.

Israeli historian Ilan Pappé, author of the groundbreaking The Ethnic Cleansing of Palestine, has spent years documenting Israel's abuses, both of the Palestinians and of history. During his recent speaking tour in the U.S., he spoke with Eric Ruder about Israel's drive to maintain its grip on legitimacy and the apartheid regime that Palestinians are daily confronted by.

HOW LONG can Israel continue its occupation of the West Bank and Gaza, its discrimination against Palestinian citizens of Israel and its denial of the right of return to Palestinian refugees?

I THINK the immunity of Israel to carry on the kind of policies it has in the past and its ability to continue them in the present rests on two pillars.

The other pillar is the moral/ethical one, which for a vast majority of members of the Israeli intellectual, political and economic elite is very important. It may not interest the more religious, orthodox part of the community, but for secular, Westernized Israelis, it is very important.

This is being seriously undermined by Israel's callous disregard for Palestinian rights. And, of course, you can continue by relying solely on the material/military pillar, but you lose, first of all, a very important and sizeable chunk of your own population. Secondly, you are in danger of being demoted, if you will, within the community of states so that it becomes a challenge to convince even the most radical sort of neoconservatives to support you. 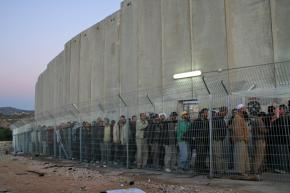 This is a real danger--and it's not for nothing that the Israelis are really putting a lot of emphasis on what they call the "fight against delegitimization." They suddenly realized that to be the hegemonic regional power, it's as important to count on the moral/ethical pillar as the military one.

And I think that this is a losing battle. The Israelis have no chance in the world of winning it if they continue to stick to the ideological mindset from which they've been working for the last 62 years.

A CHIEF component of Israel's "fight against delegitimization" is to claim that it's "inappropriate" to refer to Israel as an apartheid state. Israel's defenders assert that Palestinian citizens of Israel have the right to vote and form political parties, so Israel is not at all like South African apartheid. How would you characterize conditions facing Palestinian citizens of Israel?

MY BOOK The Forgotten Palestinians: A History of the Palestinians in Israel examines this at length, but there are three levels of discrimination.

Now, you can say it's not racist because it's not based on national identity, but Jews who do not serve in the army are not affected by this law. So in practice, these laws only apply to the Arab citizens of Israel--who, by a tacit agreement with the government, don't serve in the army. So that's a very legal basis, very clear legislation.

Then there is the semi-legalistic, more-gray area of regulations. Israel still has intact a set of mandatory emergency regulations that can be enacted at any given moment. These regulations are enacted every now and then, and then only against the Palestinian community, which gives a military government absolute control over the lives of people.

You can be arrested without trial, you can be distanced by force from your home, you can be expelled, your home can be demolished, the area in which you live can be cordoned off and declared a "militarily closed area" without any outside world intervention. And there, the military government can do whatever it wants.

The last time Israelis used these emergency regulations was when they implemented a newly passed law that Palestinians from Israel who married Palestinians from the West Bank could not live in Israel, they had to live in the West Bank. So they expelled these couples by force by declaring certain Arab villages in the center of Israel literally closed areas. And they used that to remove them.

The third level is the one that regulates daily contact between Palestinian citizens and Israeli authorities--the tax collector, the policeman, the judge. I will just give you one example, but there are many others. Even Israeli research shows that when Palestinians and Jews are brought before a court, Palestinian defendants who committed the same offense as a Jewish defendant will always get a stiffer sentence.

There are hardly any Jews who have ever been shot by the police as petty criminals, but quite a few Palestinians. When it comes to Palestinians, there is a very different posture taken by those who represent the establishment and the government. The most notable circumstance has to do with the airport, public transportation, railways and so on, where Palestinians are subjected to very humiliating searches, and sometimes are not allowed even to board a train or a domestic flight, let alone an international flight, just because they are Palestinian.