The Occupy movement has shown how to shake up the narrow political discussion in Washington--and it has nothing to do with mobilizing for Democratic candidates.

ANTI-UNION, anti-poor, anti-taxes, anti-women, anti-Black, anti-immigrant, anti-gay, anti-environment. But if you're rich or run a big corporation, then you're in luck.

From Newt Gingrich and Michele Bachmann on the right to the "moderate" Mitt Romney on the just slightly less right, it's hard to imagine a more vile bunch of people running for the Republican Party presidential nomination.

And the Democratic Party wouldn't want it any other way. Here's President Barack Obama at a million-dollar fundraiser at San Francisco's W Hotel on October 26:

The one thing that we absolutely know for sure is that if we don't work even harder than we did in 2008, then we're going to have a government that tells the American people, "You are on your own."

The message is clear: You might be achingly disappointed by the first three years of the Obama presidency--by the bailout of Wall Street while millions of homeowners face foreclosure, by the failure to push for a real jobs program, by the betrayal of the promise of universal health care, and by the capitulation to the Republicans' deficit hysteria, even while the Bush-era tax cuts for the super-rich were preserved. But it's time to set that aside, and be scared of the Republicans again--and work for Obama and the Democrats in order to stop the "greater evil." 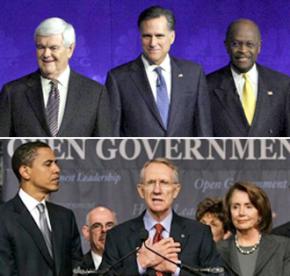 The Democratic Party makes the same appeal in every election. The difference in 2008 was that after eight years of George W. Bush, the Democrats seemed to have something positive to offer, rather than simply voting against the other guys. Not so in 2012.

But the rise of the Occupy protest movement has cast a spotlight on the bigger picture--the stark fact that the differences between the two mainstream parties are dwarfed by the complete disconnect between what the leaders of both parties are debating and the real concerns of working-class people.

Occupy has showed us something else, too, during its brief few months--that large and growing numbers of people aren't just fed up with the political status quo in the U.S., but they're ready to do something about it. That's the real hope against both the greater evil and the lesser evil--a revived working-class movement taking action against the greed and power of the 1 percent and their servants in the U.S. political system.

IT'S HARD to find words that convey the depths of ignorance and bigotry and backwardness and...did we say ignorance already?...of the Republican Party presidential field.

And that's after the departure of Herman Cain. The pizza mogul and former lobbyist announced he was suspending his campaign following revelations of an extramarital affair--having apparently survived reports of serial sexual harassment, which gives you a sense of the priorities of the people who will be voting in the GOP primaries.

The less-talked-about scandal, of course, was Cain's actually stated political beliefs--his support for a "flat tax" system that would raise taxes on everyone but the rich, and for corporate bailouts, and his opposition to Planned Parenthood and same-sex marriage, to name a few.

But while the media won't have Cain to kick around anymore, plenty of other Republicans are working from the same agenda.

Contempt for working people is old hat for Newt Gingrich, currently the frontrunner for the nomination after Cain's departure. Former House Speaker Gingrich was the architect of the so-called 1994 Republican Revolution--when the GOP tried to use a new majority in Congress for a far-reaching attempt to do away with government social programs for the poor, while further enriching Corporate America.

Back then, Gingrich proposed bringing back orphanages for the children of welfare recipients (google it--we aren't exaggerating). Today, he's challenging "stupid" child labor laws. Gingrich thinks poor children as young as 9 years old should work, mopping floors at their schools in place of unionized janitors who get higher pay:

The only thing more shocking then statements like that is they aren't as extreme as the ravings of the other right-wing lunatics trying to relive the Tea Party's fleeting glory of last year--like Texas Gov. Rick Perry and Minnesota Rep. Michele Bachmann.

So when the Republicans debate, conservative libertarian Ron Paul gets to say that people without insurance should stop expecting the government to take care of them, because, "That's what freedom is all about, taking your own risks." And Rick Perry, the Texecutioner, gets a round of applause after answering a question about the possibility of executing an innocent person with the words, "I've never struggled with that at all."

Amid these zealots and crackpots, former Massachusetts Gov. Mitt Romney sounds almost normal. But that's the point of his campaign--to position himself just this side of total reaction and pose as the "electable" Republican. But it becomes clearer with each passing week that Romney will say anything at all to win votes--whether that means flip-flopping to declare his total opposition to legal abortion or denouncing Gingrich and even Perry for not being vicious enough against undocumented immigrants.

All told, it's a putrid brew of racism, sexism and xenophobia. It says a lot about the corruption of politics in the "world's greatest democracy" that one of this bunch will lead one of the two main parties of American capitalism--and might very well sit in the White House in a little over a year's time.

THERE'S NO shortage of Democrats around to sound the alarm about the extremism of the Republican Party. But if Obama and congressional Democrats want to complain that this GOP freak show is taking over Washington politics, they have only themselves to blame.

The dynamic was established early in 2009: ultimatums and obstructionism from Republicans, concessions and capitulation from Democrats. Thus, during the debate over health care legislation, the Democrats' bargained away even half-measures like the public option, until the final legislation was overwhelmingly tilted toward the health care industry.

As for Obama's statement that Republicans would tell workers "you're on your own," he should take a look in the mirror--at the politician responsible for putting the Social Security retirement system on the chopping block, along with Medicare and Medicaid in his proposal for a "grand bargain" this summer.

Now, with the Republican creeps ranting from the wings, Democrats figure they won't have to lift a finger to appeal to their traditional working-class voting base. They think Democratic supporters will be satisfied with promises of fending off the worst of the right-wing attacks.

Actually, this is the intended result of the narrow framework of "official" politics in the U.S. The two main parties, Republican and Democratic, may differ in rhetoric and degree, but they agree on much more than they disagree. In the end, the interests of Wall Street and Corporate America--who devote their contributions to the politicians of both parties--are preserved.

However, the Occupy protest movement has forced the issues that working-class people really care about--not deficit reduction and corporate bailouts, but job creation and taxing the rich--into the national discussion.

Occupy has put real class politics--not the Democrats' fake variety--back on the table. Because while Democrats claim they're standing up for working people, working people are beginning to stand up for themselves. At Occupy demonstrations from New York City to Oakland, inside Wisconsin's Capitol rotunda last winter, in the ports on the West Coast and on the picket lines of Verizon strikers last summer, thousands upon thousands of people have spoken up for what they believe in and what they want--and it has nothing to do with the narrow debate in Washington.

The Democratic Party establishment and its supporters will go all out in the coming months to claim that the Occupy movement needs to move on to the task of reelecting Barack Obama and supporting Democrats for Congress and state government.

But this is a dead-end. An occupier in Massachusetts got it exactly right in an article titled "Occupy Wall Street, not the ballot box":

The Occupy movement arose precisely because mainstream politics failed the working people of this country. There are only two political parties to vote for: one of them is insane, the other is useless, and they are both receiving hundreds of millions of dollars from corporations and banks.

The Occupy movement has shown how the Washington status quo can be shaken up--by mass mobilization and grassroots protest that challenges the political and business establishment, regardless of what mainstream political party its members belong to. The future of the struggle depends on expanding and deepening that organizing, not turning toward the ballot box.