The year of revolt

2011 will be remembered as a year when resistance broke out around the world.

"A GLOBAL rebellion of the oppressed against the oppressor, the exploited against the exploiter." That's how the African American revolutionary Malcolm X characterized the international scene shortly before he was assassinated in 1965--but the description is even more apt for 2011.

From the Middle East and North Africa to Europe, Latin America, Asia and the U.S., a worldwide resistance has taken shape. Faced with a world wracked by economic, social, political and environmental crises, working people and activists took to the streets to demand justice, equality and an end to war.

On the October 15 international day of action taken up by the Occupy Wall Street, demonstrations took place in almost 1,000 cities in 82 different countries--proof positive that a new international movement was on the scene.

Even Time magazine got the idea. Its annual Person of the Year title is usually given to the most conventional and narrow choice possible—remember 2010’s pick? Mark Zuckerberg—but the magazine chose “The Protester” for 2011. 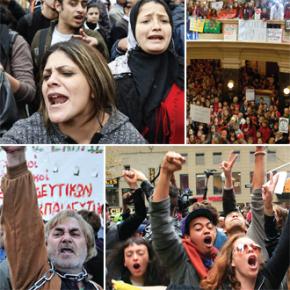 Last year at this time, SocialistWorker.org wrote in an editorial: “History tells us that when a breakthrough for our side comes, it's contagious.” 2011 proved the point again and again. Now, we face amazing possibilities and opportunities as the struggles that were sparked off and reached new high points during 2011 continue and spread.

THE YEAR began with spectacular democratic revolutions sweeping away dictators who ruled in Tunisia and Egypt for decades—and its last weeks saw the resurgence of revolutionary struggle on the streets of Cairo once more. In the months between, the Arab Spring saw revolutionary struggles unfold in Libya, Yemen, Bahrain and Syria.

The stunning changes brought to mind the Russian revolutionary Vladimir Lenin's observation that "there are decades where nothing happens; and there are weeks where decades happen."

Faced with this revolutionary upsurge, the U.S. and its partners in Europe spared no effort to try to hijack the revolution. They gave the green light to the Bahraini monarchy to crush the rebellion, and they propped up Yemen's ruler Ali Abdullah Saleh to arrange a pseudo-democratic change of power.

It’s true that the U.S. led a Western military intervention in alliance with the movement to oust dictator Muammar el-Qaddafi, and it more recently threatened Bashar al-Assad’s Syrian regime with sanctions.

But anyone who thinks that the U.S. has suddenly converted to the cause of democracy in the Middle East should recall that Washington initially kept quiet about Qaddafi's efforts to drown the rebellion in blood and looked the other way as Assad carried out a murderous crackdown. It was only the threat of civil war that led the U.S. to reverse course and go to war in Libya—while it bribed and bullied the opposition to shape it to its liking.

Meanwhile, in Egypt, the U.S. backed the military establishment that had always been the backbone of Hosni Mubarak's rule in an effort to snuff out the revolution. The strategy seemed to be working--until more than a million people took to the streets of Egypt in November, furious at both the military's insistence on remaining beyond democratic control and the miserable failure of its economic policies.

The Arab revolution faces real challenges in every country—including the ones where it has advanced the farthest, like Egypt. But it still continues, despite every effort of the imperial powers and the tyrants of the region to crush it out.

The Arab Spring alone would have made 2011 one of the great revolutionary years of all time, as decades-old dictatorships wobbled and toppled. But the year also saw rebellions in the heartlands of “democracy”--if the corporate-dominated rigged political systems of Western Europe and the U.S. can be called by that name.

In Greece, workers battling more than two years of austerity dictated by bankers and bureaucrats staged repeated mass protests and general strikes. They drew new energy from young people who occupied the square outside the parliament building in Athens and others across the country. Those protesters had taken inspiration from the movement of the “indignados” of Spain, where youth occupied the plazas of Spanish cities, large and small, to protest mass unemployment and cuts in social spending.

The Spanish youth had modeled their protests on the occupation of Tahrir Square in Egypt--an action that also encouraged young protesters in Wisconsin as they occupied the state Capitol during three weeks of mass labor protests against anti-union laws.

Youth rebellion was also a key theme in Britain, where racist police violence triggered a major street revolt in August. And on November 30, millions of British public sector workers went on strike to defend pensions--the biggest workers' action in that country since the 1930s.

Young people were also on the move in Chile, the model for the free market-oriented "neoliberal" economic policies pushed by the U.S. over the last three decades. A country that emerged from a horrific military regime just a decade ago has seen hundreds of thousands of students sustain a months-long struggle to make education democratic and affordable. The student rebellion has also spread to Colombia, where left-wing militants and unionists are routinely tagged as "terrorists" and targeted for murder.

And in the U.S., young people formed the heart of Occupy Wall Street and its sister occupations in cities around the U.S. Finally, after three years of an economic crash and an excruciatingly weak recovery, long-term unemployment, declining wages and cuts in social spending, people took to the streets in the U.S. to say: "Enough!"

Organized labor, which has been disoriented, both by President Barack Obama's failure to deliver and the ferocity of the employers' offensive, made common cause with the Occupy movement in important ways, mounting some of the largest labor protests in decades across the U.S.

The media pundits and corporate apologists who sneered at the Occupy movement for its supposed lack of demands missed a rather obvious point: It's the system, stupid. That's why Occupy went global--and why the struggle will continue.

UNDERPINNING THE global rebellion is a multifaceted crisis.

The economic crash of 2008 laid bare the long-term trends of rising inequality and class polarization, even in countries where the economy had been expanding. The resulting social crisis--a spike in unemployment and poverty worldwide and austerity almost everywhere--has led to an international crisis of political legitimacy, too.

While politicians in Europe and the U.S. have avoided the fate of their Middle Eastern cronies, the crisis has taken its toll through plummeting approval ratings and the downfall of governments in Iceland, Ireland, Italy, Spain and Greece. And now the worsening debt crisis in Europe threatens the world with another downward spiral in the global economy that will only intensify the political crisis.

The response of the world's ruling classes has been to further restrict an already narrow political space.

Greece and Italy are now run by "technocratic" governments who answer to bankers and European Union bureaucrats rather than voters. The U.S. has its own version of this trend, with the state of Michigan using new legislation to install emergency financial managers to push aside elected officials in budget-strapped municipalities and tear up union contracts.

And in Washington, politicians tried to impose austerity with an end run around the U.S. Constitution, empowering a "supercommittee" to draft budget-cutting measures that couldn't have been amended.

If you don't like it, then our rulers have a message for you: Get ready for a nightstick in the ribs or a blast of the pepper spray at point-blank range. With the crackdown on Occupy encampments across the U.S.--ordered in almost every case by Democratic Party mayors--the scenes of riot cops battling workers on the streets of Cairo and Athens no longer seem remote.

When all this is taken into account, the question becomes not why did 2011 become a year of revolt, but why didn't it take place sooner? In the U.S., a major reason is that the left is only just starting to reemerge from decades of retreat and defeat, and the unions represent only around 12 percent of workers. But it should be recalled that in the early years of the Great Depression of the 1930s, struggles were isolated and often defeated before the big labor upsurge of 1936 and 1937.

The same has been true for today's small-D depression. The shock is wearing off, and the reality is setting in: Corporate America and its counterparts in Europe and most of the rest of the world are determined to impose a deep and permanent cut in working class living standards.

But in 2011, we gave our response loud and clear: We're not going to take it--and we're going to fight back.

The struggles to come will not go onward and upward. In Egypt, for example, supporters of the revolution are grappling with a new alignment of forces after the elections, as some organizations that were part of the uprising against Mubarak have sided with the military. In the U.S., the Occupy movement is being reshaped by the loss of the encampments to police repression and the winter cold, while new initiatives take shape.

No movement or struggle ever continues at the same even pace until it achieves victory. There are always ups and downs that last for shorter or longer periods of times--and oftentimes, the change in direction happens abruptly and unpredictably. There's also unevenness between different areas.

But no one should lose sight of the bigger picture. Struggles like the Occupy movement have transformed the national political discussion in lasting ways--and changed the way that millions of people think about the world. There's no telling exactly what happens next, but we do know that the experience of the year of revolt will shape that future--and that we will 2012 faced with a world both of crisis and mass resistance.