ASK ANYONE who's been to Boston, and they'll tell you--the public transit system here has never been anything to write home about.

Whether you're waiting 20 minutes for a late bus in winter, walking miles to get home from work, or heading home at 11:30 p.m. because the T shuts down completely at midnight, you probably never suspected that you were getting more than your fair share.

But the Massachusetts Bay Transit Authority (MBTA) recently announced that, in fact, we all have been getting more than our fair share--and this year, it will even things out. The MBTA is trying to save $161 million because, at 5.2 billion in the red, it's the most indebted public transit system in the nation.

MBTA officials have laid out two potential plans to cut the budget, with the idea that one will go through. The first would raise our fares by 43 percent, double fares for seniors and students, and cut 10 percent of bus routes. The second would raise fares by 35 percent, almost double fares for seniors, and cut 58 percent of all bus routes. Both would end commuter rail service on nights and weekends, and eliminate the E Line (on the Green Line) and the Mattapan Line on weekends. 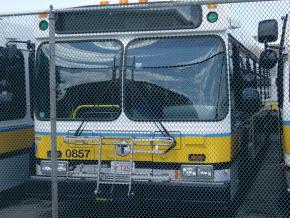 This will be a manageable inconvenience to those who have money and can use personal cars or taxis and afford the fee hikes. For working-class and poor people, who have no access to private transportation and can't afford the fee hike, the proposed changes will be disastrous.

THIS IS also a racist attack. Already, Black communities in Boston are almost completely un-served by the train, which is the best form of public transit. Instead, African Americans in Boston get by on buses, which are often late, overcrowded, slow and involve waiting at stops without a shelter.

Both of the MBTA proposals on the table cut two out of three trains that service Black neighborhoods. Meanwhile, buses that are primarily used by working-class people and people of color are slated for the harshest cuts.

Both plans also involve continuing to cut the number of workers at the MBTA and continued assault on their salaries and benefits. The MBTA is pioneering a new system where only one person operates each train, instead of having one employee in each car. It has already laid off 155 workers and plans to continue layoffs to bridge the deficit gap. In 2009, it froze workers' salaries and gutted some workers' health care plans.

The MBTA is blaming its need to cut costs on elderly riders, disabled riders and the cost of employee health care, among other factors. Because of the recession, the portion of the system's funding that comes from sales taxes has shrunk, and the state has disinvested in public transit.

You might have thought the people with the biggest bellies should go first--for instance, the five richest people in Boston, who collectively are worth $24 billion and could cover this year's MBTA budget gap with less than 1 percent of their wealth. Or Harvard University, whose endowment is about $32 billion, while Harvard pays no property taxes.

But instead of taking the money from the 1 percent who wouldn't even notice, the city of Boston and the MBTA prefer to see millions of people's living standards deteriorate.

Most of the debt that the MBTA owes is from the Big Dig, a tunnel project to build the Silver Line to provide light rail transport to the airport. That section of the Silver Line services mainly wealthier folks and tourists. Although we should have public transit everywhere, it's telling that the newest tunnel has been built primarily to service the middle and upper classes, while working-class people still don't have a train that goes to Dudley Station.

The debt that working-class people are now supposed to pay for a tunnel that we don't use is owed to four private banks--all of which received federal bailout money and pay CEOs' multimillion-dollar salaries. The fare hikes that they are trying to ram down our throats would go directly to those banks.

The MBTA and state government want us to believe that they are facing a short-term budget problem that must be shared by all. In reality, they are hoisting the burden of the economic recession that the 1 percent caused onto the backs of poor people, African Americans, the elderly, students and disabled people.

The MBTA is hosting hearings on the proposed cuts and hikes--and we will be there en masse, occupy and mic check their public hearings. Instead of cuts, we want free 24-hour service. We want trains that go to Dorchester, Roxbury and Mattapan. We want an end to attacks on workers and an end to transit racism.

If we are silent, they will continue to decimate our lives. But if we make them afraid of revolt, they will find the money to fully fund public transit. This is a fight that we can win.