Speak out for Khader Adnan

Eric Ruder reports on the case of a Palestinian political prisoner on hunger strike.

PALESTINIAN POLITICAL prisoner Khader Adnan has been on a hunger strike for more than 60 days to protest his imprisonment in an Israeli jail without charges or trial, sparking a wave of international solidarity to save his life and put pressure on Israel's "administrative detention" policy.

Israeli troops raided Adnan's home and took him from his bed in the early morning hours of December 17, terrifying his wife and two daughters. Two months later, Adnan is staring death in the face. He has lost 70 pounds, his body is covered with ulcers, and his wife Randa Adnan describes his appearance as "shocking."

"My husband is dying inside an Israeli jail," said Randa. "The world should make sure I am able to see him. And it should pressure the Israeli government to release him before it's too late. Israel denied Khader any fairness or decency, but maybe the rest of humanity will show more mercy."

The story of Adnan's incarceration without charges or trial is hardly unique. According to Amnesty International, there were 307 Palestinians being held in administrative detention by Israel, and 21 of them are members of the Palestinian Legislative Council elected in January 2006. Adnan himself has been arrested on nine separate occasions and subsequently held in administrative detention in several of those instances. All in all, Adnan has spent six years in Israeli detention since 1999. 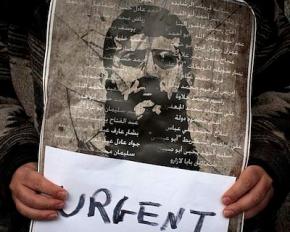 Israeli authorities claim Adnan is a member of the Palestinian resistance organization Islamic Jihad, which Israel has banned. But Israel has not charged Adnan with any specific crime other than his association with the organization. According to Human Rights Watch, which has also called on Israel to charge or release Adnan, "Adnan's lawyer said the only known allegation against him arose when Adnan was questioned after his detention about his participation in a graduation ceremony for a kindergarten that was allegedly funded by Islamic Jihad."

In the face of his own death and Israel's indifference to basic human rights, Adnan remains unbowed. "The Israeli occupation has gone to extremes against our people, especially prisoners," stated Adnan in a letter. "I have been humiliated, beaten and harassed by interrogators for no reason, and thus, I swore to God I would fight the policy of administrative detention to which I and hundreds of my fellow prisoners fell prey."

IN SOLIDARITY with Adnan's courageous act of resistance, activists around the world have held vigils and actions to call for an end to Israel administrative detention of Adnan. Predictably, Israel's boosters in the U.S. and European Union have either remained silent in the face of this abuse--or have spoken out in such tepid terms that Israel's behavior seems practically justified.

Call the office of Assistant U.S. Secretary of State for Near East Affairs Jeffrey Feltman at 202-647-7209 and demand that the U.S. pressure Israel to release Adnan and all political prisoners.

Also, as Palestinian activist Ali Abunimah points out, there is a deafening silence from a number of self-professed advocates for human rights, such as New York Times columnist Nicholas Kristof. As Abunimah wrote:

In a 2010 column titled "Waiting for Gandhi," Kristof scolded Palestinians for not adopting nonviolent tactics. Of course, Kristof was ignoring or simply ignorant of the rich history and present of such popular resistance in Palestine, ably documented by Mazin Qumsiyeh in his recent book, Popular Resistance in Palestine: A History of Hope and Empowerment, which includes hunger strikes.

Last autumn, hundreds of Palestinian prisoners spent weeks on hunger strike against punitive Israreli prison conditions, and many are on hunger strike now in solidarity with Adnan. But if Kristof and others claim to be "waiting for Gandhi," why haven't they spoken up for Adnan? After all, it was Mahatma Gandhi himself who when repeatedly imprisoned by the British famously used hunger strikes to draw international attention to his people's cause.

Adnan's selfless dedication to Palestinian liberation stands in stark contrast to the hypocrisy and prevarications of the "international community." As Abunimah wrote:

Adnan's insistence on his dignity and autonomy and his unwillingness to be broken by an overwhelmingly powerful oppressor contrasts starkly with the increasingly directionless and unprincipled actions of Palestinian leaders who continue to make dubious "reconciliation" deals that go nowhere, and pursue "negotiations" with Israel that have no chance of liberating Khader Adnan, his young daughters and millions of their countrywomen and men from Israel's occupation, colonization and apartheid.