A colonel exposes the lies about Afghanistan

Rory Fanning, a former U.S. Army Ranger, documents the impact of a damning independent report on Washington's war and occupation of Afghanistan.

THE U.S. military has launched an investigation into an independent report by an Army colonel that sharply criticizes the rosy assessment of the U.S./NATO occupation of Afghanistan.

The report was quietly making the rounds in Washington after its author, Lt. Col. Daniel Davis, sent it to several lawmakers and other figures before informing his chain of command about what he had written. Then Rolling Stone got a hold of a copy and posted it on the Internet. Davis also spoke to the New York Times, which published an article describing Davis' endeavor as "an unusual one-man campaign of military truth-telling."

In 2010 and 2011, Lt. Col. Daniel Davis spent 12 months trekking through every important U.S.-controlled military outpost in Afghanistan, gathering information for both a classified and an unclassified report on the state of American forces in the country. His travels included stops in Kandahar, Kunar, Ghazni, Khost, Paktika, Kunduz, Balkh and Nangarhar.

Davis risked his life compiling the documents in a rugged and precarious war zone. Now he is risking his career and the wrong end of a military investigation to ensure the unclassified findings are shared with the public. 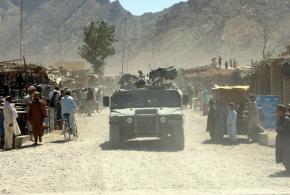 DURING HIS 9,000-mile journey around the country as a member of the Army's Rapid Equipping Force, Davis had more than 250 conversations with U.S. combatants, interviewing 19-year-old privates all the way up to division commanders. The picture that emerged from his wide-reaching survey of troops in the field contrasted markedly with the steady stream of upbeat assessments by top-level military officials.

As a bottom-line up-front, it is the assessment [of NATO's International Security Assistance Force] that the momentum achieved by the Taliban in Afghanistan since 2005 has been arrested in much of the country and reversed in a number of important areas...Hard-fought achievements in 2010 and early 2011 have enabled the joint Afghan-NATO transition board to recommend initiation this spring of transition to Afghan lead in several provinces...The past eight months have seen important but hard-fought progress in Afghanistan.

Davis' report systematically demolishes such claims and characterizes Petraeus' testimony as "misleading, significantly skewed or completely inaccurate." According to Davis, the Taliban maintains control of nearly every region of the country outside of the immediate purview of U.S. or NATO bases, because Afghan policemen rarely leave the cover of checkpoints. Ten years later, "the Taliban literally run free," said Davis.

As a 17-year army veteran with four deployments under his belt--two in Iraq and two in Afghanistan--Davis has proven his allegiance to the military, which makes his decision to publicly distribute his report even more astonishing. But Davis has been careful not to disclose his most damning findings, which are contained in the classified document he sent to 12 members of Congress.

"It would be illegal for me to discuss, use or cite classified material in an open venue, and thus I will not do so," Davis told Rolling Stone.

Davis said that when he began his investigation, he hoped "to find minimal and the slightest bit of progress as Petraeus had assured Congress was the case." But Davis sid he felt the gap between what he observed and what was being reported by top-ranking military officials was compromising the security of U.S. civilians and soldiers, both at home and abroad.

Senior ranking U.S. military leaders have so distorted the truth when communicating with the U.S. Congress and American people in regards to conditions on the ground in Afghanistan that the truth has become unrecognizable. This deception has damaged America's credibility among both our allies and enemies, severely limiting our ability to reach a political solution to the war in Afghanistan.

In defense of the continued occupation of Afghanistan by U.S. combatants more than 10 years after the initial invasion, the Obama administration has insisted that American forces are training Afghans to take control of their own military operations. "Afghan security forces are growing stronger, and the Afghan people have a new chance to forge their own future," said Obama in October 2011.

But Davis takes issue with this assessment by recounting a conversation he had with a top-ranking U.S. security official stationed in Afghanistan:

Davis: "Here you have many units of the Afghan National Security Forces [ANSF]. Will they be able to hold out against the Taliban when U.S. troops leave this area?"

Adviser: "No. They are definitely not capable. Already all across this region [many elements of] the security forces have made deals with the Taliban. [The ANSF] won't shoot at the Taliban, and the Taliban won't shoot them.

IN ADDITION to what is divulged in Davis' document, the New York Times recently issued a report shining a much sharper light on the overall war effort.

The Pentagon has never released official casualty statistics for U.S. civilians working in Afghanistan, but in 2011, at least 430 employees of American contractors were reported killed in Afghanistan. These numbers are considered low due to the current lack of reliable reporting standards:

This means that the real numbers of U.S. dead and wounded are even higher than the figures cited by Davis in his report.

Davis has responded to the Pentagon's attempt to dismiss his report and smear his character by issuing this statement:

It is my recommendation that the United States Congress--the House and Senate Armed Services Committees in particular--should conduct a bipartisan investigation into the various charges of deception or dishonesty in this report and hold broad hearings as well...These hearings need to include the very senior generals and former generals whom I refer to in this report so they can be given every chance to publicly give their version of events. In other words, put the generals under oath, and then see what story they tell.

Davis concludes by asking: "How many more men must die in support of a mission that is not succeeding, and behind an array of more than seven years of optimistic statements by U.S. senior leaders in Afghanistan?"

The people of Afghanistan have fought against imperial invaders for decades. Davis' document shows that despite 10 years of war and half a trillion dollars of U.S. taxpayer money wasted, the U.S. faces the same outcome that has befallen other overconfident empires in Afghanistan.