Stripping away our rights

The Supreme Court ruling on strip searches escalates the assault on our civil liberties.

WHEN THE U.S. Supreme Court deliberated over the constitutionality of Barack Obama's health care law at the end of March, there was no-hold-barred daily sparring in the press between Democrats and Republicans, and breathless speculation by the "experts" about every word the justices uttered.

But the cable TV airwaves were a lot quieter a few days later when the justices unveiled one of their most chilling, civil liberties-shredding decisions on record--with the encouragement of the Obama administration.

On April 2, the Supreme Court announced it had ruled by a 5-4 vote that any person arrested and held even temporarily can be subjected to a strip search--no matter how minor the charge and without any evidence that they might be carrying weapons or contraband.

The decision represents a further advance in the war on basic civil liberties--a war kicked into high gear under George W. Bush and the neocon fanatics, but carried out with enthusiasm by a Democratic president who once taught constitutional law, and who was expected by his supporters to turn the page on the Bush years. 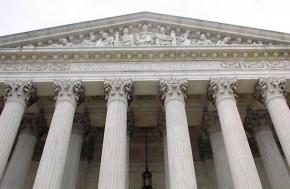 There can't be any mistake about it any longer--the drive to expand governmental powers at the expense of individual liberties and freedoms is supported by Republicans and Democrats alike.

IT'S NO exaggeration to say the Supreme Court has decided it's okay if a driver who is pulled over and wrongly detained is subjected to a strip search--even a few of them. That's exactly what happened to New Jersey resident Albert Florence, the plaintiff in the case.

Florence, who is African American, was pulled over and held on an outstanding warrant for a fine he had actually paid, but which hadn't been updated in police computer records. He even presented proof of this to police when he was pulled over because he had been wrongly targeted before. Florence suspects the real reason he and his pregnant wife were pulled over--he wasn't even driving at the time; she was--was because he was a Black man in an expensive car.

Florence was subjected to two strip searches at two county jails over his six days of confinement. At one, he was instructed to remove all his clothing, open his mouth, lift his tongue, hold out his arms, turn around and lift his genitals.

Since 1979, prison personnel have had to have reasonable suspicions a prisoner is hiding a weapon or contraband in order to perform this invasive and dehumanizing search. But now, this tiny scrap of a restriction has been thrown out the window. With this ruling, the Supreme Court is issuing prison officials the right to strip search any individual they choose, at any time--a license to intimidate and physically violate any and all prisoners.

To any sane person, this is a gross violation of basic human rights. But the Obama administration's Justice Department put pressure on the Court to rule in favor of strip searches.

Administration officials even had the nerve to paint their position as some kind of "equalizer." "When you have a rule that treats everyone the same," Justice Department lawyer Nicole Saharsky argued before the Court's ruling, "you don't have folks that are singled out. You don't have any security gaps."

Did you follow that one? In the name of "treating everyone the same," prison officials can use any excuse to strip search--and apply it to people accused of shoplifting or loitering; to the thousands of African Americans like Albert Florence who are racially profiled and pulled over for Driving While Black; and, yes, to political demonstrators who take part in civil disobedience to protest the federal government's war on our rights.

And as we all know, "everyone" won't be treated "the same." Prison officials will have the right to strip-search Wall Street swindler Bernie Madoff, vigilante George Zimmerman or a cop, politician or judge accused of a crime. But they'll reserve the actual violations of human rights for African Americans, Latinos, Muslims and Arabs--and the poor of all races.

THE SUPREME Court decision on strip searches--and the Obama administration's support for it--is horrifying, but the greater horror is that this is one example among many in a vast bipartisan assault on civil liberties. The Obama administration has continued in the footsteps of its predecessor, even on the worst Big Brother policies.

And like Bush before him, Obama is using the specter of terrorism and domestic security to sell the destruction of individual freedoms.

In fact, that's how the conservative Supreme Court justices tried to rationalize supporting across-the-board strip searches. "One of the terrorists involved in the September 11 attacks," argued Justice Anthony Kennedy, "was stopped and ticketed for speeding just two days before hijacking Flight 93."

So what was Kennedy's point? Had he been strip searched, maybe he wouldn't have carried out the 9/11 attack?

Not only has Obama continued Bush-era policies, but he has surpassed them in many respects, using his image as a liberal Democrat and a civil libertarian to avoid opposition.

The list seems to grow week by week. It includes: failing to close down the Guantánamo Bay prison camp as promised during his campaign; continuing to use warrantless wiretapping; supporting the prosecution of government whistleblowers like Bradley Manning; and perpetuating a war against Arabs and Muslims in the U.S. on flimsy pretexts such as alleged "material support" of terrorism.

Last December, Obama signed the National Defense Authorization Act, which among other things empowers the military to indefinitely detain anyone it believes is a terrorist threat, including U.S. citizens who are supposed to be guaranteed the right of due process. This was one of worse attacks on civil liberties in decades, rivaling measures put in place during the anti-communist McCarthy era.

In the coming months, the Democratic Party establishment will make the case that electing Barack Obama is the only thing standing between us and right-wing Republicans taking away our rights. But as the Obama administration's actions around the Supreme Court's strip-search decision make crystal clear, the war on our rights is a bipartisan attack.

The only way to prevent the further accumulation of state powers and the further weakening of civil liberties is to expose the Obama administration for its hypocrisy and to build opposition to the assault on the Constitution, no matter what party is in power.

During the First World War, the Supreme Court did the bidding of U.S. imperialism by giving its approval to laws that criminalized dissent. Even the most liberal of justices supported laws to imprison those who spoke out and organized opposition to the war.

Contrary to its image of being a "neutral" arbitor, the Supreme Court's role is to protect the status quo and the needs of capitalism. So when the U.S. ruling class needs to quash dissent or rein in civil liberties, the Supreme Court is happy to oblige.

But in times of social upheaval, when there is a groundswell of support for greater rights and democracy, the courts have been pushed into doing the right thing.

When the civil rights movement began to transform how the public thought about racism in America, it transformed how the Supreme Court justices ruled, too. This was the context for the justices' decision against "separate but equal" public schools in Brown v. Board of Education of Topeka in 1954.

As the late historian Howard Zinn pointed out in the 1970s, "Lacking traditional forms of power and wealth, we can only create a force out of what we have: our assembled selves, our ability to withhold our labor, to withdraw our compliance, to take hold cooperatively of the resources at hand."

This is what must be done to defend our right--not relying on Democrats to defend them for us.