Elizabeth Schulte, Leela Yellesetty and Gary Lapon document the nightmarish job prospects for the Class of 2012--and explain what's to blame.

"MEMBERS OF the Class of 2012: As a former secretary of labor and current professor, I feel I owe it to you to tell you the truth about the pieces of parchment you're picking up today.

Clinton-era Labor Secretary Robert Reich's "speech" was a joke, of course, since no college administrator in their right mind would let a commencement speaker say such a terrible thing.

Even if it is the truth.

The statistics proving this truth are stark. According to a recent study by the John J. Heldrich Center for Workforce Development at Rutgers University, just 51 percent of those in the classes of 2009 to 2011 found full-time work within a year of graduation--compared to 73 percent of those who graduated in the three years before that. 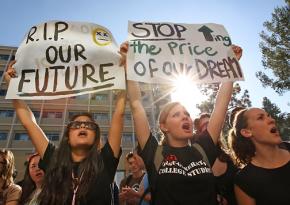 So when this year's graduates start looking for jobs, they'll be searching alongside the unemployed graduates of previous classes. As the EPI's report "The Class of 2012" points out, "Given that the unemployment picture for young college graduates has yet to show substantial improvement, the Class of 2012 will be joining a significant backlog of unemployed college graduates from the Classes of 2009, 2010 and 2011 in an extremely difficult job market."

AND YOU can't get a full picture of this jobless generation without also taking into account the young workers who aren't counted in the official government unemployment numbers--young workers who want a job but have given up looking for work.

Then there's the "underemployed" people in the workforce who have a job, don't get them the hours they need. The unemployment rate for young college graduates was 9.4 percent in 2011--but the underemployment rate was more than twice that: 19.1 percent.

The EPI's Andrew Sum took this analysis of underemployment a step further, looking into the numbers based not just on wages, but on whether workers needed their college degree in order to work the job they had. He found that among college graduates under the age of 25 who were working in 2011, 37.8 percent weren't working in a job that required a college degree at all--up from 31.1 percent in 2007.

It took me three months to find a job after graduation. By the time I found a job, I was seriously considering removing or altering the education section on my resume so to not appear overqualified for the restaurant jobs I was applying to along with hundreds of others.

Eventually, I found work at a local university with their food service provider. I was one of 400 applicants for four jobs. I am still working for this employer, though because there isn't enough work to go around in the summer months, I'm currently collecting unemployment.

From time to time, I will go on a job-hunting binge, but as I'm fortunate enough to receive decent pay, benefits and insurance with my current employer, I have been unable to find employment where I could use my degree and not receive a significant increase in workload for little or no more compensation.

What makes me the most angry about this situation is that going into undergrad, the collective mentality pushed upon me and my classmates by parents, teachers and society was that if you get a degree--even a humanities degree--you'll be able to find a good job doing what you love and earn significantly more than those who chose not to attend college. That idea was shattered in 2008, along with my faith in all the promises of capitalism.

In some states--in the South, for example--young workers are feeling even more extra pain during the recession. In Georgia, for example, the unemployment rate for all workers in 2011 was at 10.1 percent. For workers under 25 years old, it was 18.6 percent. Some 17.2 percent of workers were underemployed, and 32.7 of younger workers were, according to the Current Population Survey.

THE HIGH youth unemployment numbers isn't bad news for everyone. Employers are taking advantage of the fact that young workers must compete for scarce jobs, and they're keeping wages low.

It's worth noting that well before the recession began at the end of 2007, young workers were already seeing a decade of stagnant wages since 2000. This is particularly true for African American workers, who went into the recession with an unemployment rate twice that of whites.

As overall unemployment has increased, so, too, has the gap between Black and white workers' job opportunities. As of the start of 2010, official numbers put unemployment for Black 16- to 24-year-olds at 32.5 percent, Hispanics at 24.2 percent and whites at 15.2 percent.

This stark job inequality should be an embarrassment. But it's viewed as a benefit by employers--who have been able to keep workers pitted against one another for scarce jobs and keep wages lower in the process.

Workers competing for a precious few job opportunities are also more vulnerable to unscrupulous employers--something Justin from Massachusetts knows all too well, as he explained:

My employer outsourced me to a temp agency, but I was unaware that this was going on. I was told this other company dealt only with payroll. When I got laid off, the temp agency denied me unemployment benefits. As a result, I've been without benefits for months, and have had to cash in a 401k account from an old job to stay afloat. In the process of cashing it in, I lost about $9,000 in value (and wiped out my savings).

For many young workers, fear of never finding another job means staying in jobs they would otherwise quit because they have no other option. According to a poll of 18- to 34-year-olds by the Pew Research Center, 49 percent say they have taken a job they didn't want just to pay the bills, and 24 percent reported that they'd taken an unpaid job in order to get some work experience.

The same poll illustrated the ways that many workers struggled to make ends meet by putting off things like starting a family. Some 35 percent said that, as a result of the poor economy, they'd returned to school; 31 percent have postponed either getting married or having a baby.

THE AVALANCHE of student loan debt is fueling young workers' desperation over finding a decent job.

As wages have stagnated, college tuitions have risen, making it harder for students to even imagine completing school without taking out loans. Between 1990 through 2011, tuition and fees at four-year schools jumped by 300 percent. (It's worth mentioning, too, that during the same period, health care costs rose 150 percent.)

And sometimes it's more--much more. Megan in New York City told her story:

I have never in my life felt more foolish than when I realized that I'd become $82,000 in debt to become unemployed. I spent 22 months un- or underemployed, cobbling together an income wherever I could find it. These months were incredibly, indescribably demoralizing, and I still haven't recovered from my feelings of uselessness, inadequacy and stupidity for ending up in such a position.

My pathetic attempts at being fiscally responsible by paying $500 a month in student loan debt will have me paying for my education for the rest of my life. And I don't qualify for any loan forgiveness plans. I just have to pay until I die.

Meanwhile, as they face these growing obstacles, there's little to no social safety net to catch young workers in economic freefall. Many recent graduates can't meet the requirements to receive unemployment insurance or Temporary Assistance for Needy Families. In order to get food stamps, people must be working or taking part in a work-training program. If they aren't, they're only eligible to get food stamps three months out of a 36-month period.

This means that a growing number of young unemployed workers are forced to look to families and friends for help. According to a study released by the Pew Research Center in March, three in 10 adult children are returning to live at home--numbers that are greater than any time since the 1950s.

Some 39 percent of adults ages 18 to 34 say they either live with their parents now or moved back in temporarily in recent years. Among the youngest workers--18- to 24-year-olds--the number is 53 percent.

Today's jobs picture will have long-term ramifications, as young workers who start at lower wages won't be able to catch up. And young workers in debt are becoming older workers with debt. According to a recent Federal Reserve study cited in Barron's, 30-to-39-year-olds owe more than any other age group, followed by borrowers between the ages of 40 and 49.

Megan pointed out, "The great equalizer, education, has just proven to put me in a position where instead of dreaming of putting my kids through college, I know I'll never be able to."