Elizabeth Schulte looks at the Democrats' election-time pledge to narrow the wage gap between women and men--and what it will take to actually win equal pay.

THERE WAS a lot of speechifying last week as the Obama administration urged the Senate to vote for the Paycheck Fairness Act, legislation aimed at winning equal pay for women in the workplace.

As expected, the measure fell short of the 60 votes it needed to go forward without Republican obstruction, and Democrats took the opportunity to condemn the GOP's intransigence on women's issues. "Put on your lipstick! Square your shoulders! Suit up, and let's fight for a new American revolution where women are paid for equal work!" said the bill's author, Sen. Barbara Mikulski (D-Md.).

It's the truth--the Republicans are, in fact, waging a war on women rights. But there's another outrage to this story--the Democrats' own poor performance at standing up to them.

A woman in the U.S. is paid on average 77 cents for every dollar a man makes, a number that has changed very little over 50 years--only about half a cent a year on average. According to the Institute for Women's Policy Research, if it keeps up the same snail's pace, women will have to wait until 2056 to reach pay parity with men. 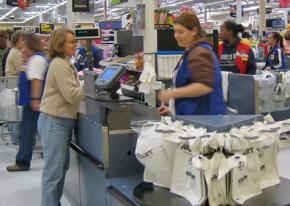 This should be treated like the outrage it is--not like a talking point that Democrats parade out in the run-up to presidential elections.

Within his first two weeks in office, Barack Obama signed the Lilly Ledbetter Act, named after the former Goodyear employee who found out upon retiring that she made $1,000 a month less than her male counterparts, but was unable to receive the back pay she was owed because her complaint didn't meet an arbitrary 180-day deadline.

At the time, Obama administration officials said that the Paycheck Fairness Act was the next thing on their agenda toward closing the gap between men's and women's wages. The bill is supposed to close up loopholes in the 1963 Equal Pay Act that allows companies to avoid responsibility for wage discrimination against women and make it easier for employees to file complaints by prohibiting employers from retaliating.

Obama supported the bill as a senator, and said that he would make sure it became a reality while he was president. But though the Paycheck Fairness Act made it through the House in 2009, Senate Democrats squandered their opportunity to pass the bill when they had a majority, so the Republicans were able to block it when it came up again in fall 2010.

So the story remains the same. The Democrats are the fiercest fighters for women's equality when there's an election around the corner, yet silent when they can actually do something about it. It's worth remembering that while they can't muster a majority for the Paycheck Fairness Act, there are always enough votes to re-authorize the Hyde Amendment, which bars funds from Medicaid to go to funding abortions for poor women.

IT GOES without saying that the Paycheck Fairness Act is unpopular with Corporate America.

In the run-up to the vote, a steady stream of propaganda flowed through the media about equal pay. Several conservatives said that it would hurt small business owners and encourage "frivolous lawsuits." Sen. Marco Rubio (R-Fla.) said the bill "reads more to me like some sort of welfare plan for trial lawyers."

The truth is that unequal pay has a devastating impact on women lives and lives of their families. This is particularly the case during the economic crisis, when men and women both are competing for jobs and struggling to make ends meet.

The Center for American Progress reported that a median full-time male worker took home $47,715 in 2010, while the median full-time working woman made just $36,931--77.4 percent of what the man made, or $10,784 less. This is the case even as women are getting college degrees and graduate degrees at faster rates than men.

Nearly two-thirds of women--who make up roughly half the workforce--are either the primary breadwinner or a co-breadwinner, and are responsible for at least 25 percent of their family's income. Because of the wage disparity, they are less likely to be able to afford health care, education, transportation, food and housing, and are more likely to live in poverty.

When you put it this way, it shows just how "frivolous" pay discrimination legislation is--not in the slightest.

During the economic crisis, conditions will likely get worse without legal protection, as fewer workers feel that they can risk their job by taking on discriminatory practices at work. As Forbes pointed out, "The number of pay discrimination complaints filed with the Equal Employment Opportunity Commission actually fell after the Lilly Ledbetter Act was signed, dropping from 2,268 to 2,191 last year."

Women workers are finding that employers are more hostile, and that they have fewer protections, as courts rule in favor of employers. As Irin Carmon pointed out at Salon.com, "From 2000 to 2009, those who filed claims were only successful 35 percent of the time, compared to 55 percent whose claims succeeded from 1990 to 1999 and in earlier decades."

IF WOMEN are going to get paid fairly for the work that they do, the employers who profit from discrimination have to be exposed.

During the era of the women's movement of the 1970s, groups of women took the movement for equality into their workplaces, and were inspired to get organized and join unions. In 1956, for example, some 18.6 percent of union workers were women; by1979, a high point of unionization, that number reached 24.2 percent.

Women built organizations like the Coalition of Labor Union Women, 9 to 5, and Women Employed. They took on the working conditions and attitudes that held women back at work, like rampant sexual harassment or the idea that a women who got married could have her wages cuts or that a woman who became pregnant could be fired. They challenged the notion that a woman didn't need to get paid the same as a man because she "didn't really need the income."

It's worth noting that the same rationale is still being in some workplaces today. During last year's failed class-action suit against Wal-Mart--in which 1.5 million past and present women employees complained of being passed over for promotions and pay raises on the basis of their sex--a store manager told one worker that he gave a male associate a larger raise because he had a "family to support."

In 1977, when eight bank workers at the Citizens National Bank in Willmar, Minn., discovered that a new male employee who they had trained would be earning more to start than any of them was being paid after as many as 10 years on the job, they complained to the bank president.

The Willmar Eight's strike, which spanned 1977 and 1978, and included daily pickets, sometimes in subzero temperatures, eventually closed down the bank. While the women lost their discrimination suit because of technicalities and didn't get the back pay they deserved, they inspired other women workers to get organized.

As People magazine reported at the time:

By far the most dramatic effect of the strike has been on the women themselves. "In the past two or three months, they have been pretty much on their own," says John Mack, their lawyer. "They weren't tough when they started, but they are now."

One striker, Glennis Andresen, 20, represented the Willmar Eight at last summer's ERA rally in Washington, D.C. Another teller, Sandi Treml, 24, ran for city council this year but lost. "I am more sure of myself," finds Sylvia Erickson. "I realize you can do things you never thought you could."