Voting for resistance in Greece

Greece's Coalition of the Radical Left could win national elections set for this weekend--a result that would shake European and international politics to the core.

AFTER MORE than four years of a grueling economic crisis, Greek voters have an opportunity to strike a blow against capital's agenda of cutbacks, unemployment and misery by supporting the radical left party SYRIZA in large numbers. The impact of a SYRIZA victory in the June 17 election would be felt across Europe, and far beyond.

After 17 general strikes, Greek workers are now using their votes to register their demand for an end to austerity and an improvement in the living standards that have been slashed in recent years. That's why the rise of SYRIZA should be an inspiration for working people everywhere who have suffered under an economic program designed to bail out banks and restore profits--at the cost of mass unemployment, rising inequality and growing poverty.

SYRIZA, which stands for Coalition of the Radical Left, shook up Greek and European politics by coming in second place in national elections on May 6, just behind the conservative New Democracy party. Because no party could form a majority, new elections were scheduled for June--and in all the public opinion polls since the first vote, up to the last ones that could be legally published two weeks before the vote, SYRIZA came in first or a close second. 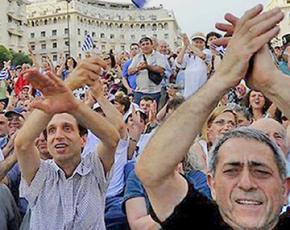 SYRIZA's support has eclipsed the center-left PASOK, which has ruled Greece for most of the past four decades. A socialist party in name only, PASOK reached an agreement--known as the Memorandum--with the so-called "troika" of the European Union, the European Central Bank and the International Monetary Fund. In exchange for a bailout of the Greek financial system--money that in reality was merely funneled through Greece on its way to European banks--PASOK imposed an austerity program that has seen Greek workers' wages cut by 30 percent already, with a further 15 percent reduction planned over the next three years. Unemployment is running above 20 percent.

PASOK leaders sold austerity as a painful but fast route to an economic rebound. It was necessary, the argument went, for Greece to endure a short-term crisis to maintain the long-term benefits of remaining part of the eurozone, the group of 17 nations that share the euro as a common currency.

Instead, the cutbacks have only worsened the economic crisis--the Greek economy has shrunk by at least 16 percent since 2008. Even with the latest bailout of Greek government debt--which wiped out half the country's obligations--Greece's debt burden will actually increase in relation to its shrinking economy.

When former PASOK Prime Minister George Papandreou showed the barest signs of hesitation in continuing this savage program, he was ousted under pressure from the troika, which acts as the enforcer for Germany, the eurozone's dominant country. Since then, a government of technocrats, backed by both PASOK and New Democracy, has continued the austerity agenda.

New Democracy leader Antonis Samaras insisted on new elections as a condition for joining the government, calculating that voters would blame PASOK for austerity and propel the conservatives into office. Instead, the vote for SYRIZA--at 16.78 percent, barely two percentage points behind New Democracy--blew Greek politics wide open. Meanwhile, a substantial bloc of right-wing voters put the openly Nazi Golden Dawn party into parliament for the first time with 7 percent of the vote.

Since then, the Greek capitalist class has been going all out to try to bully SYRIZA into dropping its opposition to the Memorandum. A SYRIZA victory, they argue, is tantamount to a vote to leave the euro, which would impoverish Greece overnight as a new currency was devalued in relation to the euro.

But SYRIZA leader Alexis Tsipras has held fast to the party's pledge to reject the Memorandum, while staying in the euro. The solution, he argues, must be an international challenge to austerity policies across Europe--in other words, cross-border solidarity of working people against a European capitalist class bent on solving the crisis at workers' expense. "The problem is not restricted to Greece, but to Europe," he said, "therefore, the solution must be European as well. This is our message."

Xristoforos Vernadakis, a leading pollster in Greece, said SYRIZA is getting the support of those hit hardest by the crisis:

The rise of a party from 4 percent to 30 percent in such a short time happens in Europe once a century. The 48 percent of Greeks who live at or below the poverty level see the welfare state as working and find themselves powerless [to stop] the annihilation of citizens' rights and social cohesion by austerity. They are turning to SYRIZA in search of a new social deal, a new contract that will offer them an opportunity to survive. People below 55 years old are turning fast towards SYRIZA.

WHILE SYRIZA may well be the top vote-getter in the election, it's unclear whether it would have be able to form a coalition government with a majority in parliament. It would get 50 extra seats in parliament as a bonus for coming in first, but it would almost certainly still need a coalition with representatives of other left-wing parties.

Part of the uncertainty is due to the sectarian position of the Stalinist Greek Communist Party (KKE, according to its initials in Greece). The KKE argues that SYRIZA is not a revolutionary party and will seek to make compromises with the capitalist class rather than try to implement a socialist program. After the May 6 election, KKE representatives in parliament used this excuse to refuse SYRIZA's offer to form a government of the left. The KKE might well take the same position following the June 17 vote--though the polls show that it is losing support among voters to SYRIZA because of its stand.

ANTARSYA, a much smaller coalition of anti-capitalist organizations, has also declined to join an effort by SYRIZA to form an electoral alliance, on the grounds that SYRIZA proposes reformist solutions to the crisis, rather than projecting a revolutionary alternative.

Certainly it is true that SYRIZA is a not a revolutionary party. It is what its name implies--a coalition that unites former Communists, social movement activists and environmentalists, alongside revolutionary socialist organizations such as the Internationalist Workers Left, whose members are contributors to SocialistWorker.org.

However, members of the organizations that make up SYRIZA, along with unaffiliated activists who support it, are rooted in the unions and social movements, and they are known for being on the front lines of the struggle. This is every bit as important as the rejection of PASOK and New Democracy as parties of austerity in explaining how SYRIZA moved from being a small but significant player in Greek politics into one of the country's leading parties.

In other words, the rise of SYRIZA is the political expression of the working-class struggle and radicalization that has taken shape in Greece over several years. And an election victory for SYRIZA would advance that struggle by giving a firm political shape to workers' demands that the cost of paying for the crisis be shifted from them to the capitalist class. It would give hope and inspiration to workers elsewhere in Europe and everywhere else who are fed up with the convergence of conservative, liberal and social democratic parties around a common pro-business agenda--a tendency that author and activist Tariq Ali calls "radical centrism."

SYRIZA, by contrast, is promising to move the Greek government sharply to the left if it wins power. But whether SYRIZA can force a U-turn in Greek economic policy, impose sweeping taxes on the wealthy, keep capital from fleeing the country, and stand up the big powers of Europe depends not on the fortitude of its representatives in parliament, but on the willingness of Greek workers to mobilize and struggle for those goals.

SYRIZA's program recalls what the Russian revolutionary Leon Trotsky described as "transitional politics"--when, in a period of prolonged economic crisis, serious demands of the working class can lead to a major confrontation with the capitalist class.

Given the battles ahead, it's important for revolutionary organization to be further strengthened within SYRIZA. And the greater the party's roots in the working class, the better it will be able to take on the challenge of halting the austerity offensive and fighting for workers' interests.

In the meanwhile, though, it's clear that this weekend's election offers a historic opportunity. A victory for SYRIZA would help boost the organization, confidence and fighting spirit of the Greek working class--and it would inspire resistance in Europe and beyond.