New York City is participating in the Department of Homeland Security's Secure Communities program to target immigrants detained by police by checking their fingerprints against immigration records. Gov. Andrew Cuomo, under pressure from immigrant right groups, withdrew the state from the program, but New York City reestablished its participation.

THE ACTIVATION of Secure Communities (S-Comm) last month basically put New York City in the same category as Arizona, whose recent law SB 1070 is regarded as the most draconian immigration law in the country. That is because in New York City, S-Comm is combined with the New York Police Department's (NYPD) policy of "stop-and-frisk." While NYC police officers cannot ask us our immigration status, they don't have to; a quick trip to the precinct can give them that information. Today, the police precincts are virtual immigration checkpoints, driving us further into the shadows of a police state.

The NYPD always submits our fingerprints to the Federal Bureau of Investigation for routine criminal history checks. What's new is that under S-Comm, the prints are shared with the Department of Homeland Security, so that the Immigration and Customs Enforcement (ICE) can determine if we are subject to deportation. ICE then transfers immigrants straight into the unjust detention and deportation system. 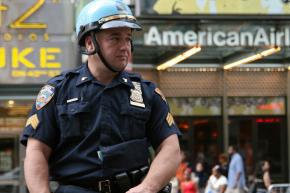 As immigrants, we are treated as second-class citizens in our own criminal proceedings. Because of S-Comm, we are routinely denied bail, jailed for longer periods and disqualified from alternative release and treatment programs. We then get funneled as commodities into an unjust detention and deportation system that profits off our misery and separates us from our families.

Had this program been implemented during my unlawful arrest in 2010, I wouldn't be here today. I was picked up in Brooklyn on my way home from work for a robbery I couldn't have committed, physically or logically. I was then processed through the criminal justice system as if I was a product on a manufacturing assembly line. I was fingerprinted at the precinct, booked at Central Booking and then spit out at Rikers Island, all in a matter of days. Under S-Comm, ICE would have immediately been alerted, regardless of the fact the current charges were ultimately dismissed, and I would've been held without bail. The reason is because ICE considers me a "criminal alien" because I'm not a citizen and I have past convictions. It does not matter how long an immigrant has lived here or how old the convictions may be.

My experience is not unusual. As a young Black male in New York City, my story of incarceration is a dime a dozen. As an immigrant of color, this is our new reality. We live in a racist society where immigrants and people of color are criminalized, regardless of guilt or innocence. This criminalization strips us of our right to be human beings, which then makes it easier to stop, detain and deport us, as if we are animals. And if we are considered animals, the police are on a safari, the jails are our cages--and if we are exotic enough, we then get shipped to distant foreign lands.

IN NEW York City, as immigrants, we are your neighbors, family and friends. However, the Statue of Liberty is no longer a beacon of refuge for immigrants today, but rather a cruel joke.

New York City is home to more than 8 million people, about 40 percent of whom are foreign-born. Almost half of all Queens residents were not born in the U.S. New York City has the largest population of Black immigrants, the largest Asian Indian population in the Western hemisphere, and the highest total Asian population of any U.S. city. Many of the New Yorkers who were deported last year were part of families who have been established for generations and provided the labor that has built this great city. Immigrants have been coming to this city for centuries. We come displaced from our countries of origin, only to find ourselves now getting harassed in our neighborhoods by racist policies like stop-and-frisk, and then getting permanently displaced by deportation programs like S-Comm. S-Comm, like stop-and-frisk, is a threat to the ethnic and racial make-up of New York City.

Secure Communities is a euphemism for ethnic and racial profiling. S-Comm applies to immigrants, regardless how or why we were arrested, and whether or not our arrests were based on profiling. ICE claims that Secure Communities "reduces opportunities for racial or ethnic profiling because all people booked into jails are fingerprinted." However, racial profiling happens before we get arrested, not when we are getting fingerprinted. NYPD already has a program called "stop-and-frisk" that relies on our appearances and stereotypes to make decisions about whether to approach us. It is legalized racial profiling.

Recent studies have demonstrated that S-Comm does, in fact, motivate the police to profile, knowing that many of us will get thrown into deportation as a result of our arrests, no matter what eventually happens in our criminal cases. Contrary to ICE's propaganda about targeting violent criminals, their own records show that 80 percent of people deported due to S-Comm have no criminal records or were picked up for lower-level offenses. Contrary to the NYPD's rhetoric about searching for guns and drugs, nine out of 10 people stopped were totally innocent, meaning there was no conviction. Not a single gun is retrieved in 99.9 percent of stops. Stop-and-frisk not only violates our rights, but it strips us of our dignity in front of our family and friends. We live in a police state--that is the only "threat to our society."

S-Comm with stop-and-frisk needs to be terminated to save the New York City we know and love. Mayor Bloomberg recently commented on S-Comm, "If the federal government has a law and you don't like it, change the law." We plan to do just that. Whether that's crossing the Mojave, swimming the Rio Grande, or fighting for justice to change the laws, one thing is clear: We will do anything to keep our families together.