How will the jobs crisis ever end?

The employment crisis is grinding on--and business and politicians have no solutions.

HIGH UNEMPLOYMENT continues to wreck millions of lives across the U.S.--and the cause isn't just bad policies, but the inherent flaws of capitalism itself.

According to the Economic Policy Institute, the U.S. economy still needs to generate about 10 million new jobs just to make up for losses from the 2007-09 recession and provide employment for young people entering the workforce. With the current slowdown in U.S. economic growth, that shortfall doesn't appear likely to be closing anytime soon.

Neither the politicians nor Corporate America are proposing anything that will end the suffering. Sure, Mitt Romney and Barack Obama are sparing over who's responsible--in the hopes of scoring political points. But both politicians are devoted to the interests of U.S. business.

That's obvious about Romney, the former Wall Street speculator-turned-Republican politician. But since taking office in 2009, Obama has proved his devotion to Corporate America--even if the business world's elite is hardly grateful. 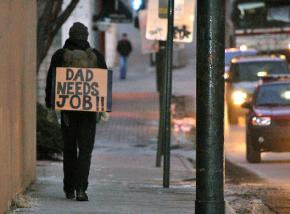 Obama's leave-no-banker-behind policies may have staved off a total financial meltdown with bailouts and loans that totaled a staggering $16 trillion, according to the Government Accountability Office. But spending federal dollars on a jobs program? No way. In fact, the Obama administration's refusal to help budget-strapped states--for example, by providing no-interest loans to stave off mass layoffs and drastic spending cuts--has led to the loss of 600,000 public-sector jobs since the president took office.

Since Obama was elected, the public sector has lost about 600,000 jobs. If you put those jobs back, the unemployment rate would be 7.8 percent.

But what if we did more than that? At this point in George W. Bush's administration, public-sector employment had grown by 3.7 percent. That would be equal to a bit over 800,000 jobs today. If you add those hypothetical jobs, the unemployment rate falls to 7.3 percent.

EVEN THAT jobless rate of 7.3 percent, while an improvement over what exists today, would still be far higher than what is normal in an economic expansion. So the question remains: Why won't businesses hire?

It isn't because they're broke. As Brett Arends of SmartMoney.com noted:

Profits, as a share of GDP [gross domestic product], have not been higher since official records began in 1940. They averaged 7.5 percent of GDP under Ronald Reagan. In Obama's first three years, they have averaged 11.7 percent. Last year, they hit 12.9 percent.

Last year, the U.S. Commerce Department says, corporate profits totaled $1.9 trillion (before tax, but after accounting for certain inventory and capital issues). That's $6,500 for every American citizen. In 1999, at the peak of the great 1990s boom, they were $3,000 per citizen.

As a result, U.S. corporations are sitting on a $2 trillion cash hoard. Some companies, eager to take advantage of falling U.S. wages and benefits, have invested in new factories, leading to a modest rebound in U.S. manufacturing employment. But by the end of 2011, business investment was still 8 percent below the peak of the last economic expansion.

Today, Krugman writes in his new book, End This Depression Now! Mellon's policies have made a comeback in the form of austerity policies that are ravaging Europe and that are favored by U.S. conservatives. The Obama administration, Krugman argues, has succumbed to this pressure by failing to implement an economic stimulus programs on a sufficient scale, let alone enact the kinds of jobs programs carried out by Hoover's successor, President Franklin Roosevelt, in the 1930s.

According to Krugman, the current crisis began when the housing bubble burst:

Business investment followed, because there's no point in expanding capacity when sales are shrinking, and a lot of government spending has also fallen as local, state and some national governments have found themselves starved for revenue. Low spending, in turn, means high unemployment, because businesses won't produce what they can't sell, and they won't hire workers if they don't need them for production. We are suffering from a severe overall lack of demand.

The result, Krugman says, is further economic decline or the kind of excruciatingly slow growth that we're seeing in the U.S. today.

Krugman outlines a series of measures to boost demand, including more stimulus spending targeted at infrastructure; an aggressive refinancing program for homeowners underwater on their mortgages; and increasingly bold measures by the Federal Reserve to spur further economic activity. He argues: "The depression we're in is essentially gratuitous: we don't need to be suffering so much pain and destroying so many lives."

But Krugman is wrong in two major respects.

First, austerity programs that prolong the depression aren't simply driven by blinkered ideologues. These policies are the product of changes in the world economy.

The advanced economies of the U.S., Japan and Western Europe are facing challenges from new competitors--principally China, but also emerging powers like Brazil and India. Burdened with massive debt from housing bubbles and consumer spending booms, big capital in the advanced countries is determined to drive down labor costs and social spending to counter the advantages of their new, lower-wage rivals.

That's why virtually all mainstream parties--social democratic and conservative in Europe, Republican and Democrat in the U.S.--are united in carrying out policies that squeeze the working class to benefit capital. They may differ on the timing and scale of the cuts, but they share a common agenda.

CERTAINLY KRUGMAN is correct that there's no need for working people to bear the brunt of the crisis while capitalists emerge from recession with their wealth and political power intact. But where Krugman sees the answer as simply a shift in economic policy, the truth is that such changes will only come when workers are organized and powerful enough to compel them.

That was the case in the 1930s, when an explosion of working class struggle and union organizing drives compelled Franklin Roosevelt to implement the New Deal, which included a government jobs program and social welfare reforms like Social Security. In the face of the 1930s revolt, even viciously anti-union businesses had to make collective bargaining agreements that included improved wages and working conditions.

Sooner or later, this depression will end. The question is when--and how much misery must be endured. That depends on how workers respond. In the Middle East and North Africa, the economic crisis laid the basis for revolutionary movements that have toppled and shaken some of the world's most repressive regimes. In Europe, workers in Greece, Spain and other countries have been mobilizing to oppose cuts in social spending and unemployment.

We've seen how the crisis has generated resistance in the U.S. as well, from the Wisconsin labor uprising to the Occupy movement. But the fightback is only beginning.

Today, with little more than 7 percent of private-sector workers now in unions, organizing will once again be key to shifting the balance between labor and capital. At the same time, working people will have to not only resist the cuts in social spending, but fight to create a real welfare state to counteract the growing number of social crises--not just long-term unemployment, but issues like the poverty that grips one in four children or the crippling debt burden of college students.

Economic crises will recur, however, as long the capitalist system continues. Ultimately, the only way out is the creation of a new system based on human needs rather than the profits of a few.