Jeff Bale and Sarah Knopp, editors of a newly published collection Education and Capitalism: Struggles for Learning and Liberation, report on the wholesale turnover of public schools to charter operators--and why our kids deserve better--in an article written for the Other Words project of the Institute for Policy Studies.

"BACK-TO-school" sales seem to start earlier every year. These days, more than binders and backpacks are on offer. Now, public schools themselves are for sale.

In July, Muskegon Heights, Mich., became the first American city to hand its entire school district over to a charter-school operator.

More than 1.6 million American kids attend charter schools, which emerged in the early 1990s. Whatever their original intent, charters are fundamentally restructuring the school system by placing it in private--often for-profit--hands. They're making teachers and staff work harder and longer for less pay, usually without union benefits or protection.

In May, Philadelphia's schools announced a plan to close 64 schools and outsource 25 more to so-called "achievement networks" run by charter operators. The goal: that 40 percent of Philadelphia's children attend charters by 2017. Detroit's plans are similar.

Restructuring may seem the best option. Urban school districts have long struggled to serve their students. And many of us know firsthand--as former students, teachers, administrators, or parents--that many of America's public schools require radical change. 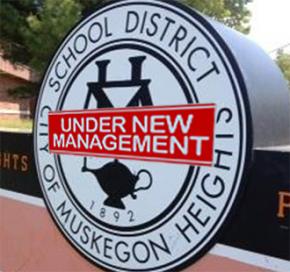 CHARTER PROPONENTS claim that their schools are less bureaucratic and more efficient, and thus save taxpayer money. Yet evidence is mounting to show that the opposite is true.

When Philadelphia first announced its restructuring plans, the budget earmarked for charters stood at $38 million. By July, that figure was "rounded up" to an astonishing $139 million. Since when is a $100 million cost overrun a sign of cost-effectiveness?

Moreover, charter proponents argue that competition and choice pressure all schools to perform better. This assumes that schools operate on even playing fields. However, Detroit officials followed their restructuring plans by imposing a contract on teachers that caps class sizes at more than 40 students starting in kindergarten and at a staggering 61 for sixth grade through high school. No school can possibly "compete" under such conditions.

Finally, consider Muskegon Heights. The city hired charter operator Mosaica Education, a for-profit company premised on earning more from contracts to run schools than it pays out in expenses. In fact, Mosaica expects to earn as much as $11 million in its Muskegon Heights deal.

That's roughly the same amount as the current budget deficit that officials gave as the reason to hire this outfit in the first place. Apparently, officials weren't troubled by Mosaica's record elsewhere in Michigan--its six other charter schools performed on average at the 13th percentile, according to the state's annual ranking in 2011.

That none of these developments has made national headlines is mind-boggling. Perhaps this has something to do with the institutional racism that led to the Supreme Court's crucial Brown v. Board of Education ruling in 1954.

Muskegon Heights is a highly segregated African American community adjacent to the predominantly white Muskegon. In Muskegon Heights, median household income stood at just over $26,600 in 2010, with over 30 percent of residents living below the poverty line.

It's primarily in minority-majority communities like this where schools are being sold off to the highest bidder, regardless of those bidders' track records.

The same story has played out in Chicago for almost a decade. The city has closed dozens of neighborhood schools and considered replacing them with charters.

What's different in Chicago, though, is that the Chicago Teachers Union is leading the fight against this agenda. After several years of building strong alliances with parent and community groups, the union is challenging Democratic Mayor Rahm Emanuel's attack on public schools. In July, Emanuel blinked and agreed to reinstate 477 laid-off art, music, PE and foreign language teachers.

The union is demonstrating that teachers and students share common interests. Together with their parent and community allies, Chicago's teachers and their unions are proving that they can put public schools back in the public's hands and win the funding required for the world-class education that all our children deserve.