Danny Katch, author of the forthcoming America's Got Democracy: The Making of the World's Longest-Running Reality Show, wonders whether anyone could capture the American elite's disdain for the rest of us better than Mitt Romney's "47 percent" speech.

THERE ARE many delicious ironies to savor from Mitt Romney's now infamous remarks at a private fundraiser in May that were secretly recorded and released to the public by Mother Jones magazine.

If hypocrisy is your thing, you can feast, as Jon Stewart did, on the image of a room full of millionaires with offshore tax havens getting offended by people too poor to qualify for even the lowest tax bracket.

What I have to do is convince the 5 percent to 10 percent in the center that are independents, that are thoughtful, that look at voting one way or the other depending upon, in some cases, emotion--whether they like the guy or not.

These are the words Mitt Romney said right after the other ones that doomed any chance he had at being liked by anyone outside the hard right wing. Mitt's tirade against the low-wage and elderly freeloaders of America has been all over the news. But since according to his calculations, around half of you reading this are entitlement brats who expect to have everything provided to you, I will reprint the remarks that may well have sealed his fate: 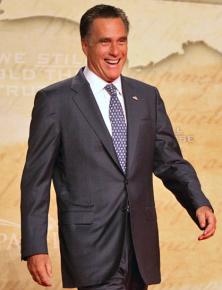 And--and--I mean the president starts off with 48 percent, 49 percent--or he--he starts off with a huge number. These are people who pay no income tax--47 percent of Americans pay no income taxes. So our message of low taxes doesn't connect. And he'll be out there talking about tax cuts for the rich. I mean that's what they sell every--every four years.

And--and so my job is not to worry about those people. I'll never convince them that they should take personal responsibility and care for their lives.

For many of us, Mitt's speech evoked a mixture of delight and shock from the realization that our cartoonish image of him as a disdainful corporate aristocrat has been 100 percent accurate all along. Who knew that when the superrich talk about the rest of us behind their closed mansion doors, they really do sound like the mean preppie kids in a summer camp movie, who despise the rag tag but lovable losers across the lake?

This isn't one of those gotcha quotes taken out of context, like Obama's "you didn't build that" or Romney's "I enjoy firing people," which are good for firing up the base, but not for changing minds. The 47 percent speech is probably a turning point in this election because it fully and accurately captures so much about the world view of Mitt Romney and his wealthy supporters. Let's make a list.

Number 1: They despise us.

"Forty-seven percent" is the unspoken accompaniment to the theme of the Republican National Convention in August. It turns out that the endlessly repeated phrase "We built it!" wasn't just a statement of defiance against the idea of government involvement in the private sector. It was also a taunt against the lower orders--the working poor, the elderly, the sick--which, according to Republican dogma, don't build anything.

Anti-big government rhetoric is really just the acceptable outer shell covering the age-old hatred of the rich for the poor.

While "47 percent" has gotten most of the media attention, Romney had another line about the "95 percent" that might just be more outrageous (or at least just as nauseating):

When [our parents] came to the end of their lives and--and passed along the inheritances to Ann and to me, we both decided to give it all away. So I have inherited nothing. Everything that Ann and I have, we have--we earned the old-fashioned way. And that's [applause] by hard work...

No wonder Romney is so disappointed in the 47 percent! After all, he started off just like them--with nothing but the gift of being born in America. Although Mitt's concept of inheriting nothing seems to include having a father who owns a car company; pays for your education, from boarding school through Harvard; and lends you money for your first house--or at least 95 percent of all that.

Here's another incredible yet unreported line from the fundraiser. It came from a guest who said that Mitt should do more to stand up for rich people like himself, since he works so hard that "we're away from our families five days a week."

Sounds like a real sweatshop. Is it possible that this guy thinks most people aren't rich because they refuse to work from Monday all the way through to Friday?

Number 3: It's not easy being white.

The second most-played clip from the fundraiser was Romney joking that he would be doing better in the polls if he were Latino, followed by his clarification that he really meant it: "I say that jokingly, but it would be helpful to be Latino."

I guess it just takes one nonwhite president in 220 years to get some folks complaining about what an unfair advantage people of color have when it comes to winning elections. Pretty soon, Fox News will be talking about the humiliation of RFPWW--Running For President While White.

Of course, if Romney is concerned about attracting more Latino votes, he should reconsider his strategy of suggesting that Obama voters, who are disproportionately people of color, are all freeloaders who don't understand the concept of personal responsibility.

Does the "47 percent refer to Obama voters or those who don't pay income tax? Was Romney advocating that low-wage workers be paid more so that they would qualify to pay income taxes? It doesn't matter, because Romney and the Republicans don't worry about making sense. That's why they can rail against a corporate-friendly health care law, filled with measures they used to support, or present budget proposals that don't come close to adding up.

Liberals often claim that the Republican Party has been taken over by unrealistic ideologues, but the opposite is true. The GOP is representing the section of the American ruling class that sees this prolonged recession as a historic opportunity to wrest from the rest of the population everything that's been gained through decades and even centuries of struggle, from our pensions and Social Security, to social welfare programs, to the post offices and our public schools.

To justify it all, they're pasting together whatever scraps of "theory" they can find: Ayn Rand's anti-morality plus Bible-based misogyny? Sure! Small-government libertarianism plus more military spending? Why not! The only thing they truly believe is that their wealth has an inalienable right to grow and grow and never stop growing.

The ideas don't make sense because they don't have to. These folks are too busy figuring out how to rob the country to worry about governing it. Which leads us to the final point.

Number 5: They know they are unpopular.

Or at least some of them do. Throughout the fundraiser, Romney's donors voiced frustration that he hadn't been able to get his message out to the public, as if the campaign wasn't already spending tens of millions of advertisements. Mitt had to keep explaining to them that most Americans actually don't share Fox News' kneejerk disdain for Barack Obama and love for corporations.

In fact, one way to read 47 percent comment is that Mitt was trying to soften the blow of delivering this news to his donors by giving them something to blame: We can't convince half the country because Obama's got them bought off with government assistance.

IF ROMNEY suspected on the night of that fundraiser that his campaign was in trouble, he must know now that he's toast. "Forty-seven percent" won't just cost him independent voters--he'll lose the trust of the powerful players who are looking for the right candidate to drive through the U.S. elite's priorities of dismantling Social Security and Medicare.

As liberal commentator Greg Sargent put it in the Washington Post: "This election will turn partly on who middle class Americans will trust more to truly defend their interests when the next president sets about the inevitable task of tackling the deficit and reforming entitlements." After his 47 percent diatribe, it's hard to imagine a President Romney being able to cut programs like Social Security without provoking enormous protest.

Instead, much of the business and political elite of the U.S. will probably conclude that it's better to let the Republicans go back to doing what they do best--creating a steady drumbeat for ever more cuts and austerity, but from outside the White House. Then the Democrats can keep doing what they do best: acting as if they have no choice but to make concession after devastating concession to those unreasonable Republicans.

It's looking more and more like this is what's in store for us in 2013. Romney's video may be the end of the election, but the fight to defend our basic rights and the government programs that millions of people rely on is just getting started.