Organizing the fight in Syria

Journalist Nader al-Homsi interviewed a member of the National Unity Brigades about the armed struggle against the Syrian regime for his website DarthNader.net.

I FIRST heard about the National Unity Brigades (Kata'eb Al-Wahda Al-Wataniye in Arabic) from a YouTube video announcing the formation of one of their units and their intention to take up arms against the regime of Bashar Al-Assad in Syria. In the first line of the statement, the speaker declares, "Religion is for God, and the homeland is for all."

At first, I was skeptical: anyone can make a video declaring the formation of a new battalion. Then, while I was talking to a trusted friend from Syria, he randomly brought up the National Unity Brigades, telling me how excited he was about these new forces that were forming. Many of his friends, he said, had just joined, and they were growing in numbers.

I asked if he knew anyone from the brigades that he could put me in touch with. After asking for permission, he gave me the contact information of one of their members who calls himself "JD." We had a conversation where we talked about many things, from the reasons for the founding of the brigades, to their relations with Islamists, to prospects for a post-Assad Syria. The conversation was originally in Arabic, and I have translated it into English with his permission in order to share it. The bracketed passages in Italic are my notes. 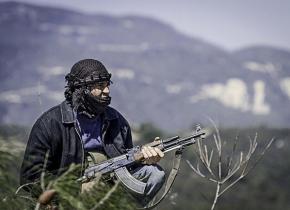 HELLO JD, thanks so much for agreeing to talk to me. So tell me, where exactly are you right now?

IN SYRIA--in the Damascus countryside, to be precise.

WHAT IS the history of the brigades?

FOUR MONTHS ago, we came up with the idea and began planning, collecting money and discussing specifics. We began actually fighting on the ground three months ago. I started working with them a few days after they were founded. We now have several brigades located in almost all of the provinces of Syria, and we are working on spreading to all of them.

WHY DID you decide to start the brigades and take up arms?

THE BRIGADES started as a reaction to the increasing sectarianism in Syria. The regime started it. Then later, extremist groups joined in. Their goal was to bring the country to sectarian civil war with no end. The National Unity Brigades operates for the sake of a civil, democratic state for all ethnicities and social identities.

The decision to arm was not our decision: it was imposed on us by the violence of the regime and its brutality in the killings. If you watch the statement for the formation of the Tamer Al-Awam brigade in Suwayda, one of the brigades that falls under the umbrella of the National Unity Brigades, they clarify that they are switching from activism work in relief and aid to taking up arms due to the regime's brutality and massacres.

SO WHAT are your goals then?

OUR FIRST goal is to bring down the regime. Our second goal is to form a civil and democratic state. We want this. And we act in the name of this.

CAN YOU tell me about the choice of names of the brigades?

JD: Every brigade has a national name. We are trying to distance ourselves from religious or ideological stamps. Our brigades contain everyone: Muslims and minorities. All participate in the battle for liberation. The brigades are a manifestation of the reality of national unity. And we have good relations with everyone. We try to approach everyone, even people from the Jihadist movement...In the end, they are Syrian, too, and our goal is to be one front.

WHAT ARE some of the names of the brigades?

Martyrs of the Syrian Revolution brigade

Martyrs of the Wastani Mountains Brigade

Tamer Al-Awam Brigade [named after a recently killed in Aleppo]

WHO ARMS and supports you?

PATRIOTIC INDIVIDUALS who don't want recognition. We reject any support that is politicized or that is not patriotic, no matter how big. And everyone who supports us shares our dream of a civil state.

SO DO you reject outside support then?

IF IT is politicized or political, then yes, we reject it. We also reject it if it is party-based or sectarian.

BUT THE problem is that there is lots of outside support for the Islamists. Won't they remain stronger than you militarily if your position is as such?

SO YOU want the structure of Aleppo to be applied to the entire country?

WE WANT justice and fairness when it comes to support. We want to unify the efforts to liberate Syria under one umbrella.

WHAT ARE your relations like with the Islamists? Do you foresee any problems between you and them in the future?

OUR RELATIONS are good with all the brigades without exception. The National Unity Brigades are not against any brigade that is fighting against the regime. We have fought in battles side by side with Islamist and Jihadist brigades. The National Unity Brigades operate for the sake of a civil state. But we also accept the rule of the ballot box, and the decision for the future of Syria is ultimately up to the people.

We are a national movement that does not support any movement or ideology. Personally, some of us are secular and others religious, but as a movement, we reject these types of characterizations.

DO YOU think that the National Unity Brigades will have any sway in terms of Syria's future? Do you think you are strong enough to make a difference?

The National Unity Brigades are a way for Syrians to realize freedom and democracy for the Syrian people in order to choose the destiny that they see fit. Syria's future will be determined after the fall of the regime by the people, through dialogue and compromise, not by weapons. And of course, through the ballot box.

BUT WHAT do you do if the regime falls and you surrender your weapons, but others do not?

THE ISSUE can be dealt with by a national army. This is a problem for the coming army. But we are against brigades continuing after the fall of the regime that are not under the banner of a national army.

DO THE National Unity Brigades have a position on foreign military intervention?

THE SYRIAN people are able to deal with their issues from the inside. Foreign states are not charity foundations, and we reject any intervention that is conditioned on anything that will restrict the future of Syria. But we also acknowledge that the decision is ultimately up to the Syrian people.

WHAT ELSE can you tell me about the National Unity Brigades, and what plans do you have for the future?

SOON, WE will form a political body made up of patriotic individuals. However, it is for the homeland, without parties, without agendas and without personal desires.

We are committed to the Geneva Conventions. We also have our own rules and guidelines for our fighters. We forbid any kind of exposure or endangerment to civilians. We also have courts for those who violate instructions. And we make all of these things clear when somebody joins the brigades, and every member signs onto them.

Lastly, most of us are very young. Lots of us left university and our whole lives to work for the Syrian Revolution and for the victory of the Syrian people.

WHAT ABOUT you personally?

I WAS at university trying to get my bachelor's degree in Information Technology. And don't ask me how I got to where I am today...because I don't even know!