The 2012 election is a loud, angry, expensive bummer. In four years, Americans have gone from hoping Obama could fix the country's enormous problems to praying he can just hold off the Mitt Romney/Paul Ryan creep show. What happened?

The problem is that the real decision-making authority resides in institutions, from Wall Street to the Pentagon, that are mad with power. Elections that are supposed to be our way of bringing about change have become a tool to get us to accept the status quo. Here, we print an excerpt from SocialistWorker.org contributor Danny Katch's e-book America's Got Democracy.

ON A mid-October evening in 2004, I sat in the crowded lobby of Hunter College in Manhattan, watching a debate between President George W. Bush and his Democrat challenger, John Kerry. Most of the crowd despised Bush for his wars and his lies and his proud ignorance, and we had a fine time mocking and hissing every other word out of his mouth.

What I remember most clearly about that night, however, took place midway through the event, when the moderator raised immigration policy and Kerry saw an opportunity to land a few jabs on Bush's reputation as a national security hawk.

"Number one," he began, "the borders are more leaking today than they were before 9/11. The fact is, we haven't done what we need to do to toughen up our borders, and I will."

The imagery of leaking borders has been thrown around so often that I wonder how many of us remember that it's just a metaphor and that the jurisdictional line between the U.S. and Mexico is not made of Tupperware. Borders are in fact abstract concepts drawn across hundreds of miles of ecosystems and civilizations that unpatriotically flow back and forth across them as they have done since before politicians roamed the earth. 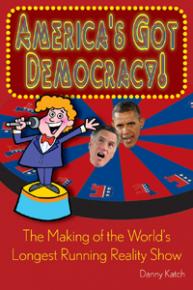 But that was just typical candidate rhetoric. After Bush replied with a defense of his record in keeping America locked, sealed, and weatherproofed, Kerry pressed on further:

Kerry seemed to be calling for everyone crossing the border to be iris-scanned and fingerprinted--as a way to make things move faster. And that was the more intelligent part of the comment. The real doozy was the implication of a shadowy threat to the homeland, a group ominously named "people from the Middle East." I'm surprised Kerry showed restraint and didn't try to freak folks out by revealing that there are actually over a million Mexicans of Arab descent, such as actress Salma Hayek and gobzillionaire Carlos Slim.

PERHAPS SALMA Hayek is part of a century-old sleeper cell plotting to reconquer the American Southwest for Mexico, which would then be turned into an Islamo-Aztec caliphate where everyone has to be politically correct and say "Happy Holidays" instead of "Merry Christmas" or else they'll be stoned to death.

You might think I overreacted. After all, these days it's a job requirement for Republicans to say strange and cruel falsehoods about Muslims and immigrants. But in 2004, even George Bush and Dick Cheney hadn't invoked terrorism paranoia to justify making life more miserable for Mexican immigrants. It was the Democratic presidential nominee that night who took us all one step closer to Crazy Town.

Of course, at the time I couldn't foresee this future. But I was struck by the reaction to Kerry's comment by the boisterous, jeering crowd at Hunter College. Silence.

Afterwards, some students defended Kerry's attack as a necessary evil to get elected while others were outright enthusiastic that he might have found a weakness in Bush's homeland protection resume.

Many of these kids were immigrants, children of immigrants, or friends with immigrants. Had a warning about Middle Easterners crossing the border been raised in one of their classes, many of them would have shot up their hands to respond to such garbage. But coming from the man running against the enemy George Bush, it became legitimate, even clever.

I felt that night that I had caught a glimpse of a normally elusive dynamic in our political life. Although it is commonly assumed that elections are the means by which the people influence their rulers, it's usually the opposite. Elections are the time for our rulers to reveal the limited menu from which we get to place our order. As our rulers grow more myopic, miserly, and paranoid with the passing of every four years, so too does the menu.

This process doesn't depend on voters being passive sheep, mindlessly grazing on the propaganda. I knew a bunch of those Hunter students. They were smart kids who followed politics. In fact, it was their enthusiasm to finally be able to vote and take part in defeating Bush's policies that made them willing to accept and integrate Kerry's bullshit. Independent critical thinking was a small price to pay in what was widely seen as the MOST IMPORTANT ELECTION OF OUR LIFETIME.

That's what they called it in 2004. And in 2008 when the economy collapsed and Barack Obama became the first African American president. And of course we're saying it again in 2012 with mass unemployment and a frightening Republican backlash against women, immigrants, and basic human kindness. Whoever first came up with that phrase must think that we have the lifespan of fruit flies.

Maybe we should just officially name our presidential contests, THE MOST IMPORTANT ELECTION OF OUR LIFETIME and give them roman numerals like Super Bowls. It's inevitable that each election is terrifyingly crucial in the moment even if, looking back, we can see that the sun probably would have similarly risen and set even had Adlai Stevenson defeated Dwight Eisenhower.

I feel that way as well, even though I don't support Democrats or Republicans. When Obama won in 2008 I partied in celebration that my country had voted for racial and economic justice even though I thought he couldn't and wouldn't deliver it. In 2004, I mourned Bush's victory because it would legitimize his first stolen election and every other rotten thing he did, and further demoralize the once promising antiwar movement that had already sold its soul to the pro-war Kerry.

It's hard not to be sucked in to a battle that seemingly puts your very values and tastes up for a vote. 2004 was the year we all started talking about Red States and Blue States, which were said to describe not just how people voted in certain regions but the entirety of their opinions about politics, religion, sports (NASCAR vs. soccer), food (steak vs. sushi), and anything else (uh…stud poker vs. Uno?). All this while the actual platforms of the two parties presented all of the contrast of Red vs. Rose. Possibly Salmon.

THIS YEAR, there are more substantial differences between the two parties, mostly because the Republicans have gone feral. The essential point of this book is these differences are still not enough to merit the term democracy.

As a Marxist, I admittedly have high standards. I start from the premise that it should be possible to live in a society in which residents decide how to be policed, workers organize their companies, and soldiers vote for war and peace.

I'm not going to rail at Barack Obama for not creating large scale communes in abandoned Rust Belt factories (although…) but we can only appreciate how piss-poor our democracy is by considering what it could be. Even if you don't agree with this book's socialist premise (some of which have appeared in my columns for SocialistWorker.org), you will hopefully find this perspective useful.

And funny. Politicians trumpet small ideas with grandiose self-important rhetoric. I like it when radicals put out big ideas with a dose of humility and humor appropriate for those of us whose dreams still far outpace our accomplishments. I'm not going to lay out a systematic critique of American democracy, capitalism, or any other four syllable word (that plan was dashed when my editors nixed my groundbreaking chapter on armadillos.) Instead I aim to look at some of the absurd aspects of our political process that we consider normal.

And if it turns out that I was able to make just one person laugh and look at our society in a new light, then there's something wrong with the rest of you because I think this book is awesome.