Thrown off the austerity cliff

Behind the political posturing in Washington, there's already a bipartisan agreement on this much--that workers will have to bear the brunt of the budget-slashing to come.

THE WALL Street crowd that tried to foist Mitt Romney on working people is now pushing hard for a budget deal that targets Social Security and Medicare--and President Barack Obama is meeting them more than halfway.

Never mind that millions of people turned out in the election with the express wish of stopping Romney and the Republicans from carrying out these kinds of attacks. The cuts are coming anyway, ushered in by Obama--unless working people organize through their unions, communities and organizations to demand that the bankers and business executives who caused this crisis pay for it.

To be sure, the president met with labor leaders November 12 to assure them that he's determined to hold the line on defense of so-called entitlements--programs that the overwhelming working people are eligible for as they age. Labor leaders emerged from the meeting saying that that president supported their calls to defend Social Security and Medicare.

But business had the last word--literally. The day after union officials cleared out of the White House, an all-star lineup of CEOs descended on Obama to push their plan for budget cuts intended to slash even more of what remains of the U.S. social safety net. 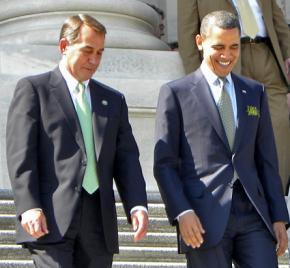 Duncan Niederauer, CEO of NYSE Euronext, the operator of the New York Stock Exchange, said that business wanted things done its way--or else. "We simply won't be investing in the United States," he told a reporter. "We will be investing elsewhere where we have more certainty of the outcome."

For his part, Obama said in a November 14 press conference that he's determined to let taxes rise for the wealthiest. He said that at the beginning of his first term, too--and then surrendered to Republican demands for an extension of all the tax cuts from the Bush years, including for the very richest.

Obama might hold out longer this time around. But the president made it clear that he's willing to entertain big spending cuts, too: "I don't expect the Republicans simply to adopt my budget. That's not realistic. So I recognize that we're going to have to compromise. And as I said on Election Night, compromise is hard. And not everybody gets a hundred percent of what they want, and not everybody's going to be perfectly happy."

Incredibly--but predictably--none of the housebroken White House press corps asked Obama about the contradiction in his campaign-trail promises to protect Medicare or Social Security and his openly stated desire to reach a "compromise" with Republicans for deficit reduction, which would cut precisely these programs.

THE OUTLINES of a so-called "grand bargain" between Democrats and Republicans have been in place since August 2011, when Obama proposed a deal to Republican House Speaker John Boehner to cut the deficit by $4 trillion over 10 years--in part by slashing Medicare and squeezing Social Security benefits. It was only because the Tea Party-driven House Republican caucus objected that the deal fell apart.

The result of that standoff was a compromise that will lead to what's been called the "fiscal cliff"--an agreement to let the Bush-era tax cuts expire and to impose a 10 percent, across-the-board cut in government spending if Congress takes no action by December 31. The economic impact of these measures--taking place in an already weak recovery--could be severe. According to the Congressional Budget Office (CBO), the U.S. economy would shrink by 0.5 percent in 2013, as opposed to the 2 percent that most economist predict.

If it seems crazy to play with the U.S. economy like this, it is. But there's a political logic to it--make it appear as if there's no choice but to carry out a sweeping austerity program.

This is exactly the method the U.S. uses when it instructs the International Monetary Fund to squeeze some Third World government into making brutal cuts in social spending. It's what European authorities are doing in Greece, where austerity measures are required in order to get a debt bailout. The basic message is former British Prime Minister Margaret Thatcher's slogan: "There is no alternative."

There are, of course, differences between Obama and the Republicans on how to carry out austerity. The Republicans, who've built their political appeal on total opposition to tax increases--especially for the wealthy--want all the pain to fall on workers. Obama wants to spread out the pain over a longer period and restore higher tax rates on families making more than $250,000 per year. But the top tax rates won't go back to anything near their high points in the 1950s or 1960s, but to the moderate Clinton-era levels.

Obama's willingness to cut a deal with Republicans may come as a surprise to many, but the president's been angling to make this sort of agreement since he first took office in 2009 in the depths of the financial crisis. Back then, the budget deficit mushroomed not just because of the terrible effects of the recession--a collapse in tax revenues and a surge in the unemployment rate--but because the federal government, through the bank bailouts and other measures, effectively took hundreds of billions of private-sector debt onto the public books.

According to a tally by the Center for Media and Democracy, the total cost of the financial bailout from all parts of the government--the Federal Reserve, the Treasury and more--includes $4.76 trillion disbursed, another $13.87 trillion that could be at risk, and $1.54 trillion outstanding. By comparison, total U.S. economic output in 2011 was just over $15 trillion.

But the bankers and the business leaders have no shame about demanding sacrifices from the rest of the population. So when a Republican landslide in the 2010 elections gave the right wing control of the House, Obama had the political cover to make the budget deficit deal that business had been demanding for years. Washington Post journalist Bob Woodward chronicled the effort at a budget deal in his book The Price of Politics. The president, he said, advocated "not doing anything too drastic in 2012"--an election year, after all--"then medium-tough measures in 2013 in spending...then taking on long-term entitlement."

"Long-term entitlement" is a euphemism for Social Security and Medicare--which means raising the age of eligibility for the health care for seniors and squeezing the benefits from both programs. Obama did propose raising taxes--but called for making $3 in cuts for every $1 in new taxes--with the aim of lopping $4 trillion out of the U.S. budget over a decade.

Comparing Obama's proposal to the program of the conservative "Blue Dog" Democrats, Woodward writes: "His Blue Dog had risen; under this framework, there would be pain for all."

On the campaign trail, of course, Obama repeatedly attacked Romney and his running mate, Paul Ryan, for wanting to wreck Medicare. But Obama was more candid in an interview with the Des Moines Register: "I am absolutely confident that we can get what is the equivalent of the grand bargain that essentially I've been offering to the Republicans for a very long time, which is $2.50 worth of cuts for every dollar in spending, and work to reduce the costs of our health care programs."

ALL THIS won't go down well with the millions of people who rescued Obama from political defeat by turning out to vote despite the president's business-first economic program.

Van Jones, ousted as a White House adviser on the environment and co-founder of the Rebuild the Dream organization, declared recently:

We are still on a complete fighting posture because we knew we had to win the politics in November and then on the economy in December. For the progressives who threw ourselves on hand grenades for the president over the past 24 months and especially the past six months, we are not going to be happy at all if he turns around and takes a chainsaw to Medicare, Medicaid and Social Security in pursuit of some misguided so-called grand bargain.

The question is what organized labor and broad progressive organizations are prepared to do about it. Max Richtman, head of the labor-backed National Committee to Preserve Social Security and Medicare, said Obama assured union leaders that "whatever savings come out of those programs would not come out of beneficiaries or citizens, it would be focused more on providers."

Certainly there's good reason to squeeze health care providers that put profits ahead of patient care. But the health care companies will simply offer worse service as a result, leading to an effective rationing of health care for Medicare recipients.

Worse, the Obama "compromise" on Medicare and Social Security doesn't even begin to address the problem of a historic decline in tax revenues from corporations and wealthy individuals--the people with the money to really address the budget deficit.

And the notion of slashing military spending--$554 billion in 2012--to funnel resources to human needs is unspeakable in Washington. So, too, is boosting taxes on corporations. Obama and Romney both made a point of saying in their debates that they want to lower the corporate tax rate.

The money is there to solve the budget deficit. The challenge now is to build a movement that rejects the notion of "shared sacrifice" and put the squeeze on the 1 percent who are responsible for the recession and the miserable recovery.