The partisan battles obscure bipartisan agreement on the need for historic cutbacks.

THE REPUBLICANS and Democrats were barreling toward each other in a high-stakes game of political chicken with the approach of a March 1 deadline for Congress to act on deficit reduction targets, or face drastic across-the-board spending cuts known as "sequestration."

As this article was being written, mainstream media commentators were predicting that the federal government would go over this second "fiscal cliff" without party leaders reaching an agreement. A deal is still possible--if only to push off the deadline--but Republicans and Democrats seemed more interested in blaming each other instead.

As with the first fiscal cliff on January 1--which was averted with an agreement to extend Bush-era tax cuts for all but the very richest Americans--the two parties have bickered continuously.

But the discussion about sweeping and indiscriminate budget cuts also serves an important purpose for the political class as a whole, regardless of party--to convince the rest of us that there is no alternative to accepting some level of budget cuts, with Democrats representing austerity on a somewhat less catastrophic scale compared to Republicans. 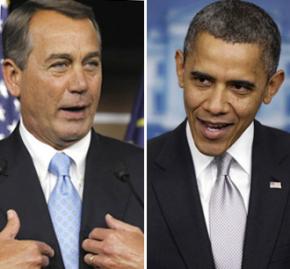 Congress created the sequestration deadline--originally set for January 1 and pushed back for two months as part of the first fiscal cliff agreement--during the summer 2011 debate about raising the federal government's debt ceiling. Back then, House Republicans basically put the U.S. economy at risk of a financial catastrophe in order to extract massive cuts in federal spending, and the promise of more to come.

The idea behind the sequester deadline was that the prospect of tens of billions of dollars in across-the-board spending cuts--including in military spending cherished by both parties--would be incentive enough for politicians to work out an agreement to further slash federal spending.

But Congressional Republicans don't seem to be budging this time. At the start of the year--facing the more dire (to them) threat that massive individual and business tax cuts would expire--a majority of the GOP voted to accept modest tax increases on the super-rich to avoid the fiscal cliff. Now, Republicans say, it's the Democrats' turn to compromise and accept their demands for cuts, cuts and more cuts.

As before, the Obama administration seems to have won the p.r. battle to portray the Republicans as responsible for the crisis--a party so bent on getting its way that it's prepared to crash the government. The White House put up various figures to describe the calamities to come from the sequester cuts--Transportation Secretary Ray LaHood, for example, warned of nationwide flight delays of 90 minutes or more because of $600 million in cuts to the Federal Aviation Administration.

Still, the bad press hasn't moved congressional Republicans, whose party is led by hard-line right-wingers whose preferred solution is for large parts of the federal government to shut down.

But it's important to see the bigger picture: That the staged conflict between Democrats who supposedly want to "preserve vital government programs" and Republicans who want to "reduce the deficit" is false. The truth is that both parties are committed to austerity--and that neither would propose the obvious ways to "preserve vital programs" and "reduce the deficit" at the same time: By raising taxes on corporations and the rich and massively cutting the Pentagon budget.

IT'S NOT every day that two of the media's best-known partisan pundits--E.J. Dionne for the Democrats and David Brooks for the Republicans--together deliver an analysis of Washington politics that sounds like SocialistWorker.org's. But that's what happened on NPR's All Things Considered on February 22.

Dionne started out by saying that the sequester deadline represented "the ghost of the Tea Party haunting Washington"--because the March 1 trigger was included to placate Tea Party budget-slashers back in 2011. "President Obama has come up with, I think, a very reasonable deal," Dionne continued. "I think my friend David should be embracing the president because he's doing what David has spent two years telling us we should do: a balance of money raised through tax reform and some reasonable cuts, including, by the way, cuts in Medicare spending."

Let that sink in: Dionne was acknowledging that President Barack Obama--elected to the White House twice by tens of millions of people who believed he would stand up for working people against Wall Street and Corporate America--stands for the same Republican Lite strategy as David Brooks: moderate tax reform acceptable to big business along with much-less-moderate spending cuts.

Brooks' response? He essentially agreed with Dionne. Republicans, Brooks said, were going to the wall for "a piece of mindless anti-government fanaticism, which doesn't separate the good from the bad. It just cuts...So to me, it's a political disaster in the making for Republicans."

Then Dionne delivered the clincher. Of the $4 trillion in deficit reduction that the political establishment wants over the next decade, the first "fiscal cliff" deal:

produced $642 billion in revenues. We've already done well over $2 trillion in cuts. Obama agreed to a lot of cuts in 2011, and he's not asking nearly as much in tax increases as either [the Simpson-Bowles deficit reduction commission] did or he once did. He'd settle for $400 or $500 billion in additional taxes. You'd still have an enormous ratio in favor of cuts over tax increases if you agreed to Obama's deal.

Again, let that sink in. When you look at the big picture, Barack Obama is prepared to make $2 and even $3 in spending cuts for every $1 in increased tax revenues in the drive to reduce the federal deficit by $4 trillion over 10 years. The general public doesn't support three times as much spending cuts as tax increases--it's only Republican fanatics who aren't satisfied.

FORMALLY, SEQUESTRATION would impose another $1.1 trillion in cuts over the next decade, with $85 billion coming during this year. Although the cuts would unfold over time--analysts say the biggest effects this year wouldn't be felt until April--they would still be bitter medicine.

Nearly 3,000 public schools with a high percentage of low-income students would face cuts in Title I funds, affecting roughly 1.2 million children, predominantly students of color. This could also mean layoffs for 10,000 teachers, plus cancellation of after-school and other programs designed to supplement already lean offerings at public schools.

Because sequestration affects the government's discretionary budget across the board, the military would also take some deep hits--which is why Obama and the Democrats previously hoped the Republicans could be cajoled into making a deal to avoid the sequester.

In truth, the military budget could be cut by far more than sequestration would impose, and the U.S. would still be spending more than all its rivals. Even some mainstream opinion-makers reject the fear-mongering about defense common to both House Republicans and the Obama administration.

Consider BusinessWeek, hardly a hotbed of anti-imperialist propaganda. In response to Army Chief of Staff Gen. Ray Odierno's suggestion that the sequester cuts would severely compromise the readiness of U.S. armed forces, the magazine responded: "Flapdoodle. The military is manufacturing a crisis to protect its wasteful, bloated, poorly designed budget."

The $46 billion cut that the Pentagon would suffer from sequestration is a drop in the bucket compared to its $400 billion F-35 joint strike fighter program, which has been plagued by cost overruns for practically meaningless improvements over existing aircraft.

The U.S. economy is currently predicted to grow at an anemic 2 percent in 2013, but that figure would be shaved to 1.3 percent if sequestration kicks in for the whole year, according to economists. With unemployment running stubbornly high since the Great Recession and millions of people with jobs struggling to make ends meet, going over this second fiscal cliff would cause a further blow to living standards.

Well, the living standards of some people, anyway. The top 1 percent--with combined wealth counted in the tens of trillions of dollars--would still have more money than they could spend in many lifetimes. Less than 20 percent of their combined wealth would cover every penny of the $4 trillion in deficit reductions that the leaders of both parties are intent on driving through, with the rest of us bearing the brunt.

The super-rich were supposed to have gotten the short end of the stick when the fiscal cliff deal in January resulted in a moderate increase in marginal income tax rates paid by the wealthy few. But that same agreement allowed the payroll tax holiday to expire--and so some 163 million people will be affected by a tax hike this year that will raise half again as much revenue as the slight income tax increases on the rich.

Both fiscal cliffs have shown us the real dynamic of mainstream politics, hidden beneath the raucous battles between Republicans and Democrats: All the political leaders in Washington want to swing the budget axe. They only differ--when they differ at all--on how much to lop off.