The crime of “saggy pants”?

SAGGY PANTS: hip-hop fashion statement or criminal act? According to a public service announcement produced by the Black Mental Health Alliance of Massachusetts (BMHAM), wearing your jeans below your waist is a "behavioral health issue in our neighborhoods and communities that must be addressed."

The advertisements began running in late January and feature two young Black men walking with their pants hanging low and a Black cop disparaging the "hip-hop style" of saggy pants. "There's something you may not know," the cop continues. "You can be fined up to $300, be placed in the state prison for up to three years, or be placed in the county jail for up to two years. You still think it's cool? Pull up your pants. Respect yourself."

BMHAM cites an archaic Massachusetts General Law as its justification for advocating the incarceration of those who commit the "crime" of wearing saggy pants. The law is entitled "Crimes Against Chastity, Morality, Decency and Good Order" and states that "a man or woman, married or unmarried, who is guilty of open and gross lewdness and lascivious behavior, shall be punished by imprisonment in the state prison for not more than three years or in jail for not more than two years or by a fine of not more than $300." 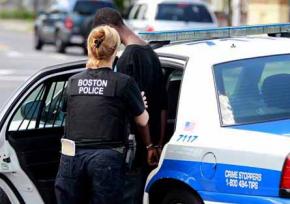 It's tempting to dismiss BMHAM's advertising campaign targeting saggy pants as hopelessly (perhaps hilariously) out of touch with the real needs of the community, but it's worse than that. This campaign does nothing but further reinforce a climate where it is acceptable for the police to stop, harass and incarcerate Black youth.

This message is particularly backwards coming from a Black organization that says it is "committed to improving the quality of mental health care among minorities and disadvantaged." How will more incarceration improve the "quality of mental health care"? Massachusetts is already one of 26 states in the country with some of the harshest sentencing laws. Juvenile offenders in Massachusetts can still receive a sentence of life in prison without the possibility of parole, and Black youth are, of course, overrepresented among those receiving such punishment.

Unfortunately, BMHAM is not alone in advocating the criminalization of saggy pants. In fact, states, cities, towns and even private businesses have attempted to pass laws or impose such policies in recent years. In 2008, a 17-year-old in Rivers Beach, Fla., was locked up for a night for going against a city ban on saggy pants. The ban was later declared unconstitutional.

In November 2011, Albany, Ga., enacted an ordinance that fines people who wear skirts or pants that hang three inches below the top of the hips and expose skin or underwear. In 2012, a group of Chicago aldermen called on Chicago Public Schools to mandate uniforms in an effort to stop students from wearing saggy pants. And in 2011, people protested US Airways in San Francisco for kicking a passenger off a flight for wearing pants that were deemed too baggy.

SEEKING TO criminalize those who wear saggy pants is yet another ominous expression of the pervasiveness of the criminal justice system in the lives of Black people. And it's tragic that BMHAM's campaign further legitimizes the idea that Black people themselves are the ones to blame for their disproportionate imprisonment and other kinds of inequality facing people of color.

According to its website: "BMHAM wants to educate our youth that when offensive pants that are sagging are worn, it has such a profound impact on their behavior as well as behaviors of police, school and community behaviors towards them along with their own self-perceptions."

In essence, BMHAM thinks that police surveillance of Black youth and the lack of good education in Black communities comes from how Black youth present themselves. This is an argument made from on high as well. In response to the January homicide of Hadiya Pendleton in Chicago, for example, President Barack Obama gave a speech that could have been delivered by George W. Bush, in which he argued that strong communities "start at home" and that "there's no more important ingredient for success...than strong stable families, which means we should do more to promote marriage and encourage fatherhood."

As Conor Friedersdorf pointed out in the Atlantic, white college students at Boston's Northeastern University have annually dedicated a day to running around in their underwear, but it's difficult to imagine that they would be targets of an indecency law.

In Massachusetts, Black people make up 6 percent of the state's population, but 32 percent of those incarcerated. Unemployment for Black youth ages 16-24 is at a staggering 39 percent. In Boston, Mayor Menino is pushing for the rezoning schools, which in a highly segregated city means resegregation.

In this context, it becomes clear that the criminalization of a style of dress associated with African American communities amounts to a racist double standard that attempts to deflect attention away from the broader social and institutional means by which Black people's lives are being destroyed. These ideas need to be challenged outright.

Various individual activists and organizations in Boston are taking a stand against this racist campaign by asking their supporters to sign a public statement demanding that BMHAM take down these public ads. Groups involved in the effort include the Boston NAACP, the Center for Church and Prison, the Boston Teacher Activist Group, the Boston Students Against Mass Incarceration, the Hispanic Black Gay Coalition and the Boston International Socialist Organization.