Under Barack Obama, the Democratic Party is attempting to push through cuts to entitlement programs like Social Security that Republicans once only dreamed of.

THE OBAMA administration's official budget proposal--ready for release on April 10, after weeks of leaks and speculation--represents a historic assault on one of the most popular and successful government programs in U.S. history: the Social Security retirement system.

If there was one issue most important to Obama's reelection victory last November, it was his promise to protect programs like Social Security and Medicare from Republican maniacs like Mitt Romney and Paul Ryan.

Yet now, less than three months after taking the oath of office for a second time, Obama is proposing what he promised to prevent.

His budget for the 2014 fiscal year includes a change to the way Social Security benefits are calibrated to keep up with inflation. The result: "An average worker retiring at age 65 would get a yearly cut of $650 by age 75, but at age 85, this would be a cut of $1,130 a year," writes Dean Baker, co-director of the Center for Economic and Policy Research.

But wait, there's more. According to press reports, Obama is also putting forward a "means test" to qualify for the government's Medicare health care program. The idea is to keep better-off Americans out of the Medicare system--though research shows that middle-income people, not the rich or the upper middle class, would be most affected. 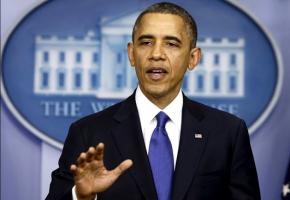 And there's a hidden agenda. Conservatives who seek to eliminate so-called "entitlement" programs like Social Security and Medicare altogether want to replace universal access with means testing for a strategic reason--to transform popular social insurance programs into welfare programs that can be further whittled down or even eliminated.

Advance reports of the White House proposal brought a storm of criticism from the most stalwart supporters of the Democratic Party.

Stephanie Taylor of the Progressive Change Campaign Committee said: "You can't call yourself a Democrat and support Social Security benefit cuts. The president has no mandate to cut these benefits, and progressives will do everything possible to stop him."

But the truth is that liberals like Gailland and Taylor are angry with Obama for doing exactly what he's been saying he would do throughout his presidency. Even as a candidate in 2008, he promised he would make the "hard decisions" to reduce the federal deficit. That was the real agenda all along--even as Obama promised on the campaign trail last year to stand up to the Republicans.

And Obama isn't alone, either. Other liberal darlings like House Minority Leader Nancy Pelosi are making excuses for an attack on federal programs that have held out the promise of a dignified retirement and basic medical care for the elderly. The fact that most people want Social Security and Medicare to be expanded, not cut back, means nothing to the Democrats--who are attempting to carry out austerity measures that Republicans once only dreamed of.

THE OBAMA administration claims it is merely tweaking Social Security in order to ensure its long-term viability--by introducing a "chained Consumer Price Index (CPI)." The chained CPI is a modified way of calculating cost-of-living adjustments--modified, that is, so that it doesn't keep up with actual increases in the cost of living.

Asked about chained CPI, Pelosi defied logic by replying that she doesn't consider reduced Social Security benefits to be "cuts." "I consider it a strengthening of Social Security," she said. Less is more, cutting is strengthening--George Orwell's Big Brother would be proud.

Both Obama and Pelosi have adopted the dishonest narrative that Social Security is facing a "crisis" and therefore must be "saved" by reducing benefits. According to this argument, entitlement programs like Social Security and Medicare are suffering from "runaway costs" that have ballooned the federal deficit. Without raising the retirement age or cutting benefits or both, the federal government can never hope to balance the budget.

But this simply isn't true.

Second, even if there was a crisis in funding Social Security, it has nothing to do with the federal deficit. Even Ronald Reagan--not known for having the sharpest grasp of the issues, nor any great love for "big government" programs--understood this. He declared in 1984:

Third, it would be easy to generate additional revenue for Social Security by getting rid of the income cap for paying the payroll tax that funds the retirement system. Currently, income above $113,700 a year is exempt from the payroll tax--which means the people who could afford it most actually contribute less proportionately.

Fourth, the costs of the Medicare program are growing, but that's a consequence of the runaway increase in health care costs generally--and the failure of Obama's health care law to curb them because the law preserves the profits of the medical-insurance-pharmaceutical complex above all else. Cutting Medicare won't do anything to address the underlying problem of rising health care costs.

Adding insult to injury is the cynical way these entitlement cuts are being used in Obama's partisan battles with congressional Republicans to reconsider the across-the-board spending cuts--known as "sequestration"--that kicked in March 1, as well as proposals for moderate tax increases. As Politico.com's Kevin Robillard reported:

The administration hopes including the cuts--adopting the chained CPI for Social Security and slashing about $400 billion from Medicare over the next decade--can persuade Republicans to roll back the cuts in the sequester and agree to further revenue hikes. In total, the president's plan would reduce the deficit by $1.8 trillion over 10 years.

In other words, Obama started budget negotiations with historic concessions on Social Security and Medicare--without the least guarantee that Republicans will go along with higher taxes or fewer reductions in other government programs. Anyone who's ever negotiated anything will tell you that's a bonehead move.

Unless Obama's strategy isn't to avoid the cuts in entitlements at all.

THERE IS a crisis facing many Americans who are retired or nearing it. But the solution isn't cutting Social Security benefits, but expanding them.

Already, the median income for people over 65 is less than $20,000, and almost 70 percent of seniors depend on Social Security for at least half of their income. As Teresa Ghilarducci, a retirement policy expert and professor of economics, wrote last year:

Seventy-five percent of Americans nearing retirement age in 2010 had less than $30,000 in their retirement accounts. The specter of downward mobility in retirement is a looming reality for both middle- and higher-income workers. Almost half of middle-class workers, 49 percent, will be poor or near poor in retirement, living on a food budget of about $5 a day.

An overwhelming majority of people in the U.S. opposes the cuts that are being put forward by Democrats--and the even harsher measures Republicans are sure to come up with. According to one poll:

On Social Security, voters across party lines support lifting the cap on wages above the current level...We know from focus groups that voters see this cap as an unfair loophole that they did not even know existed. Sixty-five (65) percent of voters favor gradually lifting this cap for both employees and employers, including 75 percent of Democrats, 63 percent of Independents, and 54 percent of Republicans.

Given this overwhelming public sentiment, it's obvious that Obama could have stood against any cuts in Social Security and Medicare. But despite the occasional rhetorical flourish to the contrary, he has been clear that his loyalties lie with Wall Street and Corporate America--and his willingness to open budget negotiations by promising entitlement cuts marks the further positioning of the Democratic Party as the spokesperson for these interests.

Obama's budget proposal isn't an unnecessary surrender to Republicans, as many liberal commentators consider it, but a further extension of his effort to position the Democrats as the first party of Corporate America.

For decades, the Republicans have wanted to dismantle Social Security--George W. Bush, for example, tried to make privatization of the retirement system the centerpiece of his second term. Like the others before him, he failed dismally.

As a result, cuts in Social Security became known as the "third rail" of U.S. politics--any elected official who dared to touch it risked their career.

Obama thinks he can survive touching the third rail--because he thinks he can control the elements of the Democratic Party's liberal base that would be certain to leap into action if Republicans tried to cut Social Security.

The only way to save vital programs like Social Security--and to confront the politics of austerity more generally--is to mobilize the kind of mass opposition that shakes the status quo, no matter which party is in charge. But that will mean building a struggle that is independent of the Democrats.