Postal worker Melissa Rakestraw reports on a retreat in the attack on the post office.

A PLAN to eliminate Saturday mail delivery and slash postal jobs has been canceled for now, according to an April 10 statement from the U.S. Postal Service Board of Governors.

But protest had an impact as well. Congress vote on the budget and the board of governors' announcement came on the heels of nationwide demonstrations on March 24 by thousands of postal workers and community allies to protest the USPS's plan to eliminate Saturday delivery.

Republican Rep. Darrell Issa of California, the chair of the House Oversight and Government Reform Committee and a zealot in demanding cutbacks at the post office, expressed his disappointment that the USPS chose to follow the law. "This reversal significantly undercuts the credibility of postal officials who have told Congress that they were prepared to defy political pressure and make difficult but necessary cuts," he said. 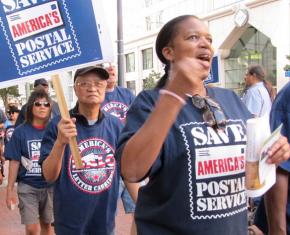 The drive to wreck the postal service may have been blocked for now, but our struggle to save the post office is far from over.

This week, Issa is scheduled to have talks with his counterpart in the Senate, Democrat Tom Carper, chair of the Senate Homeland Security and Governmental Affairs Committee, to come up with legislation to "reform" the USPS. Carper has said that he intends to use a bill passed by the Senate last year as a framework for the talks. The Senate-passed bill included authorization to end Saturday delivery within two years, provided certain benchmarks were met. The bill never came to a vote in the House.

The Democratic "friend of labor" who occupies the Oval Office has also made it clear that he isn't concerned about preserving postal jobs and services. In the Obama administration's budget proposal, it called for letting the USPS get rid of Saturday delivery as early as June--even sooner than the USPS initially proposed. According to estimates, eliminating Saturday service could result in the loss of 80,000 jobs.
Po
Obama's budget also calls for postal workers to increase their share of contributions to their general retirement funds--even though the accounts are currently estimated to be overfunded by $80 billion. And, of course, the same budget proposal from Obama would cut Social Security benefits for all seniors by changing the formula for cost-of-living adjustments.

These harsh proposals--both specifically directed at USPS and more generally at working people--are coming from the man who was enthusiastically endorsed for re-election by the National Association of Letter Carriers (NALC) and the American Postal Workers Union (APWU), the two largest unions of postal workers.

Obama has made no mention of repealing the congressional mandate for USPS to pre-fund retiree health care accounts 75 years in advance with an annual $5.5 billion payment--this is the key thing driving the financial "crisis" facing the postal service.

NALC PRESIDENT Fred Rolando issued a statement in response to the Obama budget, stating, "Slashing letter carrier jobs and weakening the Postal Service by eliminating Saturday delivery while reducing the quality of service for our customers, instead of ending the retiree health pre-funding mandate altogether, is plain wrong--especially at a time of high unemployment."

Rolando also rejected the board of governors request for postal unions to renegotiate recently settled contract disputes in light of the continuation of 6-day delivery. "The Board's call to reopen and renegotiate the postal labor contracts is yet another sign that the Postal Service needs new executive leadership," Rolando said. "Asking the NALC to renegotiate a contract that was just settled in January is insulting and unnecessary. "

Even though the board has temporarily backed off the elimination of Saturday delivery, Postmaster General Donahoe continues a massive assault on services with the closing of hundreds of mail processing plants, a reduction of hours in thousands of retail facilities, attempts to outsource trucking and a degradation of delivery standards, including door-to-door delivery.

Grassroots activists in Communities and Postal Workers United have put out a "Call for Bold Actions to Save the Postal Service." The group's statement reads:

[W]e call on national postal union leaders to continue the struggle by organizing a series of bold actions, in the great tradition of the labor and civil rights movement, to pressure the USPS, Congress and the president to prevent and reverse postal cuts and closures, such as a national postal march in Washington D.C.; a rally at L'Enfant Plaza [USPS headquarters]; encouraging regional and local actions, including actions on the work-room floor; cross-country postal "Freedom Rides" and walks; and civil disobedience--e.g., sit-ins or occupations of congressional offices, USPS management offices and other appropriate targets.

CPWU has illuminated the need for an escalation of tactics to stop the unyielding assault being waged on USPS from within by management and pro-privatization forces at large. The battle to fend off the elimination of Saturday delivery is a temporary victory in the War to Save America's Postal Service.