Alexander Billet reports on how the struggle of Guitar Center workers in New York City to win a union is connected to broader protests by low-wage retail workers.

LATELY, IT seems that we can't get away from the hard, simple fact that art requires labor--both in the actual creation and in the conditions that make it possible.

Here's a brief run-down of the past few years. South Korean assembly workers at Cort Guitars, laid off by the company several years ago, have waged an international campaign to get their jobs back. In the United Kingdom, retail workers at HMV have not only managed to hijack the company's Twitter account, but barricaded themselves in their stores until their paychecks were delivered as promised.

Here in the U.S., Bay Area staff at the Legion of Honor and De Young Memorial art museums have gone toe-to-toe with management over the introduction of a "two-tiered" wage system. And this is against the backdrop of an apparently never-ending labor disputes involving orchestra musicians from Detroit to New York City, from Chicago back to the Bay Area. 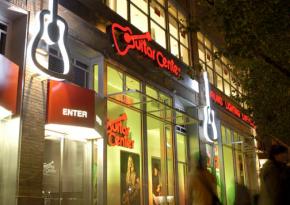 Now, it's Guitar Center's turn--the world's largest retailer of musical instruments and accessories. In early April, workers at their flagship store in New York City announced their intent to form a union through the Retail, Wholesale and Department Store Union, a subsidiary of the United Food and Commercial Workers.

As recently as a few years ago, employees at Guitar Center believed their wages and treatment on the job were decent. But something changed in 2007: The chain was bought out, and not just by any old company. It was Bain Capital. The same Bain Capital that became one of Mitt Romney's many public embarrassments during his presidential campaign, notorious for buying out other companies and gutting standards before laying off workers and shipping things off to other countries.

That same M.O. had shown its ugly face at Guitar Center. Hence, the drive to unionize in New York. And once again, true to form, Bain is doing everything they can to prevent this from happening. Here's what the workers' petition (which you should sign right now) has to say about conditions at the NYC store:

Now, those of us who are non-sales workers barely get paid more than minimum wage and rarely get raises. Guitar Center doesn't offer part time workers health benefits and we almost never receive paid sick days or vacation time. The sales workers amongst us used to have decent commissions and benefits but now our commissions have been cut.

We also don't get paid sick days and we can make as little as 7.25/hr. We have ever-increasing mandatory sales requirements but we are being forced to do more and more non-sales work that makes it harder to reach those requirements. If we don't sell enough Pro Coverage (aka "extended warrantees"), our commissions take a hit.

NOBODY CAN live on $7.25 an hour. And that's one of the reasons behind the appearance of the "Fight for 15" campaign and the uprising of low-wage workers in New York and Chicago. Though there's no indication (at least yet) that the workers at Guitar Center are connecting themselves to this new movement, it seems hard to separate from this overall context.

Would these folks--who make their bread by suggesting the best pickups and can string a guitar with their eyes closed--have had the courage to step up and demand dignity if they hadn't seen hundreds of burger-flippers and stock-jockeys do the same? One can imagine.

There is a shift taking place right beneath our feet in how young people conceptualize work. For some time, retail and fast food gigs have been thought of as stop-gap jobs--the kind of thing you do until something better, something more "career-worthy," comes along. After all, very few musicians start plucking at a guitar or toying with the decks because they want to work in a store.

This train of thought regarding low-wage work was never quite as true as we might make it out to be, particularly for immigrant workers and young people of color. But for in the past five years it's sunk in: this is all that society has to offer us. And if it's going to be anything close to a fair living, if any of us are ever going to have enough security to pursue any of the joys of life, then we're going to have to fight.

On April 24, halfway across the country in Chicago, several hundred of these low-wage workers did just that, walking out from their jobs at McDonald's, Subway, Victoria's Secret, Macy's, Nordstrom's and a slew of other chains. For FF15 and the Workers Organizing Committee of Chicago, the 24th was a turning point.

Among the strikers was Whole Foods employee and Red Wedge editor Matthew Camp (that's right, we have day jobs). Speaking with Huffington Post, Camp--who by all accounts deserves to be spending his time on the writing and art history I know he loves--brought up the bygone days of decent-paying working-class jobs: "The reason those jobs paid so well is that people got together like we are now and stood up for themselves."

He's right. Each and every struggle that won anything meaningful for working people took the kind of creativity that left the 1 Percent flummoxed. Whole Foods' CEO John Mackey may act the part of the benevolent and caring boss, but he cares not a whit for the aspirations of employees, ground out by back-breaking and degrading conditions. Just the same, Mitt Romney and his ilk haven't a clue about the precision that goes into making a guitar shop work.

These, dear readers, are the enemies of a free and vital culture. If we want to even come close to fulfilling our creative potential as a class, we're going to need them out of the way.