The thanks they get for voting Obama

Barack Obama is giving a whole new meaning to the phrase "adding insult to injury."

NATIONAL TEACHERS Appreciation Week, traditionally the first full week of May, passed this year without even a token statement from Barack Obama. Instead, the White House issued a presidential proclamation honoring the same weeklong period as...National Charter Schools Week.

Yep, you read that right. Barack Obama--who got the votes of millions of teachers last November and whose party depends on hundreds of millions of dollars in political spending by teachers' unions and the rest of organized labor--not only couldn't be bothered to utter a symbolic good word about teachers. He went out of his way to celebrate an initiative of the Republican Bush administration that spotlights a centerpiece of the anti-teacher school deform agenda.

If you're a regular reader of SocialistWorker.org, you'll know that there's a long history of the Democrats talking populist when they're asking for the votes of their working-class and liberal base of support--but acting quite differently when "the party of the people" is in office. 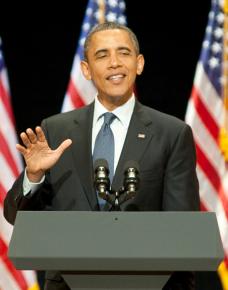 But Obama and Co. seem almost eager to rub their supporters' faces in it.

Teachers aren't the only example. At election time, one of the most reliable appeals for voting Democratic is to raise the specter of Republicans taking away a woman's right to choose. The urgent pleas of pro-choice supporters in 2008 and 2012 to vote for Obama were a stark contrast to his administration's neglect of the issue.

This week, though, the Obama administration took action on reproductive rights, appealing in court for...continued restrictions. In April, a federal judge struck down an Obama-era rule barring women younger than 17 from obtaining the Plan B "morning-after" pill without a prescription. This Monday, the Justice Department of a pro-choice Democratic president asked a higher court to overturn that decision.

Its reasoning for stopping the judge's order from going into effect--that women would become "confused" if they gained unrestricted access to Plan B, only to have it taken away later if the Obama administration succeeded in its appeal--was a glaring and infuriating display of contempt for women and their rights.

There are plenty more examples. The willingness of Obama and the Democrats to give ground to Republicans on issue after issue while kicking their own base in the teeth has come into particularly sharp focus this spring. It's worth pointing out that these are also the opening months of Obama's second term, during which the president was, according to some liberal commentators writing before the election last year, supposed to prove he was a true progressive after all.

This isn't a new insight into the nature of the Democratic Party, by any means. But the importance of the lesson that flows from it--anyone who wants to see change must rely not on allies in high places, but the collective strength of our struggles and our movements--is all the more crucial to remember as activists mobilize around the urgent issues we face today, from immigrant rights to climate justice and more.

THE REPUBLICAN Party and the Democratic Party aren't identical. If they were, there wouldn't be any reason to have two of them.

Most of the time, most Democrats stand to the left of most Republicans. That's a big part of why Democrats are effective in carrying out an agenda that serves the political and social status quo. They can win the votes and political support of masses of ordinary people well to their left who fear even worse from the other guys.

But some of the time, there's not even the proverbial dime's worth of difference between Democrats and Republicans. Charter schools and the corporate school deform agenda are a prime example.

The standardized testing mania, scapegoating of teachers and encroachment of private interests into public education began in earnest under George W. Bush with his No Child Left Behind law. But Obama took over the Bush program for public schools and kicked it into high gear. His administration's Race to the Top program dangled billions of dollars in front of state governments, in return for passing "reform" laws that tied teacher evaluation to test scores and opened the way for more charter schools, among other measures.

Obama and his Education Secretary Arne Duncan were speaking glowingly about charters long before National Charter Schools Week. The language of Obama's proclamation is typical: "These learning laboratories give educators the chance to try new models and methods that can encourage excellence in the classroom and prepare more of our children for college and careers."

Every part of that statement flies in the face of the facts. Charter schools prepare fewer of our children for anything at all, because the private operators who run schools with public funds get to exclude the students they don't want.

For example, a 2011 study of 14 Florida school districts found that more than 86 percent of charter schools didn't have a single student with a severe disability, compared to more than half of district public schools that did. The pattern is similar with homeless students. As education expert Diane Ravitch reported at a 2010 hearing, "New York City has 50,000 homeless students, but only about 100 are enrolled in a charter school. If a proportionate number were in charters, there would be 1,500, not 100.

In other words, charter schools on the whole take the students they want from public schools--preferably, those without special needs that cost more money--and leave the rest behind in a system that's even more starved for financial resources, thanks to the subsidies for charters.

And even so, charter schools can't demonstrate that they do any better at educating the students they do take. On the contrary, a 2009 study by the RAND Corporation, for example, analyzed charter schools in five major cities and three states, and found that in every location, students in the charter schools performed no better at best, and demonstrably poorer at worst.

So why the zealous cheerleading for charter schools? The answer: Follow the money.

Follow the money in a direct sense--more than one-third of charter schools were run by for-profit companies as of 2010, according to the National Alliance for Public Charter Schools. Public school privatization is proving to be an even bigger bonanza in other areas--companies like Rupert Murdoch's News Corp. are scrambling to get their hands on the billions to be made off the standardized testing bonanza.

But you can also follow the money in an indirect sense. The charter school crusade is aimed squarely at the power of the teachers' unions--according to Diane Ravitch, 90 percent of charters are non-union. Charterization has become a dependable way to get rid of well-paid, veteran, union teachers--and replace them with educators who labor under the conditions described by one Ohio teacher in a comment at Ravitch's website:

I've been an educator in Columbus, Ohio, since university. In my eighth year, I currently earn $34,000 before taxes at a 9-12 charter school. I can be fired at any time. I have no tenure, no union and scarce resources to teach...My family needs the money I earn, so I must teach, but I just pray a public school gives me a chance.

Teachers and education workers are one of the last remaining strongholds of the union movement--around three in every 10 union cards in the U.S. are held by members of the American Federation of Teachers or National Education Association. An injury to those unions through charterization is an injury inflicted on the whole working class, to the benefit of the bosses.

Plus, there's the ideological angle. Charter schools are promoted by free marketeers, liberal and conservative alike, who claim that the private sector always does a better job than wasteful, corrupt, bloated big government.

Actually, it's abundantly clear that the private sector is a cesspool of waste, corruption, bloat and worse--which is why the charters need a vigorous, pay-no-attention-to-that-man-behind-the-curtain public relations campaign, with the president of the United States serving as cheerleader-in-chief.

REPUBLICANS AND their media mouthpieces like Fox News still like to portray the Democrats as tools of organized labor, but it's hard to believe anyone buys that any more.

Labor's political power has been shrinking with its membership numbers for decades, while business' spending advantage in elections expands with each cycle. But more to the point, the leadership of the Democratic Party has molded itself so completely into the role of servants to Corporate America that it doesn't even bother with the old symbolic gestures any more.

As historian Van Gosse wrote after last year's election, "The mass party of the center, birthed 20 years ago by Bill Clinton triangulating his way into a 'socially liberal' version of neoliberalism (or what used to be 'liberal Republicanism' in the days of Nelson Rockefeller and George Romney), has been brought to fruition by Barack Obama's savvy Chicago apparatchiks."

So it shouldn't be any surprise that the Obama administration's policies are bent and twisted in whatever ways are necessary to serve the interests of Corporate America, at the expense of the people who make up the main base of support for the Democrats.

But even as Obama and the Democrats thank their most devoted supporters with betrayals and insults, they won't tolerate the least criticism from their base.

On this score, the Obama White House is every bit as belligerent as Democratic administrations that came before it--maybe more so. Thus, Joe Biden told anyone dissatisfied with the multitrillion-dollar bailout of Wall Street to "stop whining"; Obama himself mocked liberal critics of his health care law for "seeing the glass as half empty"; and White House spokesperson Robert Gibbs sounded off against the "professional left" that would only "be satisfied when we have Canadian health care, and we've eliminated the Pentagon."

In stark contrast to their timid attitude in confrontations with Republicans, the Democrats save their real venom for anyone to their left who dares to hold them accountable for the policies and principles they claim, usually at election time, to stand for.

You don't have to go far on the Internet to find a liberal commentator who fumes about this two-faced behavior. But all too often, even critical voices accept that the only "realistic" course in a two-party system is to seek to influence their Democratic "allies."

But is it realistic to expect working people to get a hearing from a party that is so intent on listening only to the demands and dictates of Corporate America?

Or is it more realistic to rely--as the most important struggles for change in history always have--on the power of mass mobilization and action at the grassroots to build a political alternative that breaks out of the confines of the two-party political system?