From hope to cynicism in the Obama era

What should we make of the Obama years that will come to an end on January 20? Danny Katch draws some conclusions, in an article written for the Indypendent.

Obama gave a farewell address to thousands of adoring fans in Chicago on January 10. He cast his presidency as another step in our long struggle for progress "that has given work and purpose to each new generation." Linking the Founding Fathers with runaway slaves, Second World War soldiers with Stonewall rioters, Obama evoked a liberal, patriotic vision of America as a country made great by its scrappy underdogs.

Eight years ago, it was startling and inspiring to hear this familiar Obama theme of our legacy of resistance coming from a president. The words sound more hollow now that we know how little the speaker threw himself and his mighty office behind that legacy's current chapters.

Then came the following day's spectacle. Trump's first post-election press conference on January 11 was a riot of dodged questions about corruption and denials of wild tales of Russian blackmail rings. It was easy to be nostalgic for even the empty eloquence of the departing president. 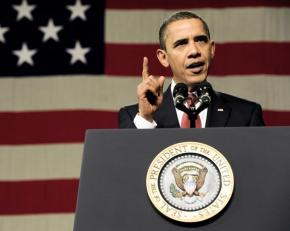 It is likely Obama's stature will only grow with every passing day in the Thunderdome. But while he is obviously a far more appealing figure than his successor, it's important to understand the ways that Obama's presidency paved the way for Trump's.

IT WAS precisely because of his unique eloquence and dignity, in addition to the milestone of his breaking the White House color line, that Obama managed to restore hope in American progress and justice for millions of people. His failure to deliver on those hopes has ushered in an era of cynicism well suited for a lifelong real-estate hustler and self-branding specialist.

The defining moment of Obama's presidency came perhaps unfairly early, in March 2009 at a meeting with the heads of the nation's biggest banks. The financial institutions had recently been bailed out by furious taxpayers after their crooked loans sank the global economy. The massive public outrage gave the President enormous leverage to impose major reforms on the banks' accounting rules, risky investment strategies and bloated executive compensation.

Obama's leverage was further enhanced by his massive approval ratings--a now inconceivable 80 percent when he came into office--and the fact that the Democrats had won control of both houses of Congress. Rarely has a president ever had so much leverage over the lords of finance.

According to Ron Suskind's insider account, Confidence Men, here's what he told the bankers:

My administration is the only thing between you and the pitchforks. You guys have an acute public-relations problem that's turning into a political problem. And I want to help. But you need to show that you get that this is a crisis and that everyone has to make some sacrifices. I'm not out there to go after you. I'm protecting you. But if I'm going to shield you from public and congressional anger, you have to give me something to work with on these issues of compensation.

"I want to help... I'm protecting you." That's all the bankers needed to hear. According to Suskind, they came into the meeting "nervous in ways these men are never nervous," but came out of it with their old arrogance, having offered Obama few specific suggestions. Soon, the Tea Party would emerge, and America's anti-bank sentiment would become a Republican strength.

A pattern was set for the next eight years. Time and again, in the name of bipartisan compromise, Obama and the Democrats negotiated away their supporters' demands, only to watch their opponents come up with more extreme new demands.

They ruled out single-payer health care from the start, abandoned the option for publicly financed health insurance, and ended up with a "universal" health-insurance law that was literally written by an insurance company executive. Even still, not a single Senate Republican voted for Obamacare.

The failed attempt to reach an immigration deal was even more disastrous. Rather than use his executive branch power to reduce or halt deportations as a negotiating ploy, Obama ramped up deportations to record levels to convince the Republicans that he was "serious about enforcement" and therefore they should be serious about legalization, which only succeeded in pushing the entire immigration debate rightward.

THE RESULT of these compromises and others was that most people's living standards stagnated or declined. Inequality skyrocketed. Some people turned away from Obama and toward Trump. Many more still liked Obama, but concluded that if even he couldn't deliver hope and change, than there is no hope.

Now we have a president whose message is that there is no noble American struggle in which we all take part. There is only us and them--Mexicans, Muslims, criminals. There are only deals with winners and losers. It's time for us to abandon happy talk about the common good and stop being suckers.

Trump is taking over the state's most repressive mechanisms from Obama's mindful hands: the deportation system, the military, and history's most extensive network of foreign and domestic surveillance.

When the government's mass surveillance activities were exposed by the whistleblower Edward Snowden, Obama deployed his reputation as a thoughtful liberal to pooh-pooh criticism of the spying. "In the abstract you can complain about Big Brother and how this is a potential program run amok," he said, "but when you actually look at the details, I think we've struck the right balance."

Never mind that ordinary citizens were never granted access to "actually look at the details"--does anyone actually think that Obama's successor will give a damn about balance?

Equally ominous is the way that Obama, who won the presidency in 2008 based on an antiwar reputation, has legitimated a Bush administration idea that used to horrify and enrage liberal opponents: our continual state of war, driven by paranoia about terrorism.

"For eight years that I've been in office," Obama said in a recent speech at MacDill Air Force Base in Florida, "there has not been a day when a terrorist organization or some radicalized individual was not plotting to kill Americans....I will become the first President of the United States to serve two full terms during a time of war."

Obama has scaled down the deployment of large numbers of troops, but he's greatly expanded the use of drones, cyberwar, and special operations forces--who are now active in 138 countries, more than twice as many nations as when he took office. They will report to Trump now.

Some Democrats will reject any hint of equivalency between Obama and Trump. After all, Obama carried himself with dignity and intelligence, without a single corruption scandal in eight years of desperate Republican digging. For his efforts, he was rewarded with a nonstop barrage of racist insults and disrespect--much of which was promoted by Trump through his "birther" conspiracy theories.

The fact that Obama's greatest strengths--his personal dignity and honesty--ended up further entrenching the powers that be from the Pentagon to Wall Street should tell us that the political crisis we face is about powerful institutions more than any individual politician.

First published at the Indypendent.