“Openness” and the left

Tim Koch, an International Socialist Organization member in Poughkeepsie, N.Y., comments on the debate among the left about internal discussion and group security.

FOR SOME years now, it has been common currency on the left to proclaim the universal goodness of openness, of the "free airing of ideas" and so on.

Certainly in the era of WikiLeaks, Julian Assange and Edward Snowden, the exposure of hidden abuses committed by powerful state and military officials is to be applauded. After all, we all want to see these elite abusers of power brought to account. Brave individuals like Chelsea Manning risked everything in order that we, the people, can know of the misdeeds perpetrated by the ruling elite.

A broad political spectrum of people can agree on this. You don't have to be a hardened anarchist or revolutionary Marxist to welcome these dramatic exposures. You just need a sense of basic fairness and respect for the basic democratic principle that those who have power should be accountable for how they exercise it.

But it's important to understand that the virtues of "transparency" preached by the media, taught to us in school and honored by political leaders, at least in words, have class bias. Our ethically bankrupt ruling class is dirty all around and open about nothing. So the logic of openness-equals-cleanliness is to be applied to us, but not to them. 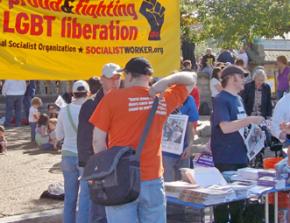 The "managers" of everyday working-class life, who discipline employees at work or keep tabs on them form their perch in the state, consistently demand that we open our private lives to their scrutiny--from the data engineers at the National Security Council, to Amazon.com human resources managers to Burger King franchise holders. In our society, there's an unspoken truth: privacy is for the rich and powerful. It is a privilege to be paid for, and anyone who engages in an act of unpaid privacy must be up to no good.

We can't understand this double standard of privacy without an understanding of social class. For the rich and powerful, privacy is understood to be of utmost importance and is systematically enforced by a well-maintained apparatus of courts, lawyers, police and judges. The corporate executives of Walmart certainly expect that their strategy meetings will be entirely private and secret, despite the fact that the decisions made at such meetings will affect the lives and well-being of thousands of working people.

Anyone who has protested gatherings of the economic elites, like the World Bank or the International Monetary Fund, can attest to the battalions of militarized police, 10-plus-foot-high security fences and arsenal of tear gas that are brought to bear to ensure the security of these proceedings, and that the only things made public are what the elites want made public.

Working people under capitalism, on the other hand, face a much higher level of scrutiny. Apart from the daily video, digital and human surveillance workers endure on the job, we are subjected to a level of policing and social regimentation previously unknown to human civilization. In fact, the more marginalized and oppressed one is in society, the greater the level of scrutiny and hyper-accountability.

This is a crucial component of the blame-the-victim mentality. Just think about how the media pored over every detail of Trayvon Martin's personal life, looking for anything that might besmirch his character, even though he was the victim of a racist murder.

But it's not just dramatic examples like Trayvon Martin that reveal the double standards of openness and accountability. The mundane details of everyday life do as well: Split seconds late going through a yellow stop light, and you can expect a computer generated ticket in the mail. Applying for a job? Be ready to give potential employers access to your social media profiles and credit score. You were sick yesterday? Show me a doctor's note. Need food stamps? Tell the state who lives with you and what they do with their time. Need federal financial aid? List every detail of your economic life. Dismally, such a list could go on and on.

INTERNAL DOCUMENTS of the International Socialist Organization from the last four years have been leaked and published on the Internet. These documents were meant to be read only by members who are understood to be in good standing with the rest of the organization.

Does seem like a crazy idea? That a group of people strategizing about how to confront the rich and powerful and who seek to join with broader forces to do so might come together and democratically agree on a certain standard of informational ethics--that is, agree to keep a set of strategic discussions private? Is such a thing unheard of?

My labor union, one of the oldest in the U.S., regularly issues bulletins to its members that are labeled "secret." Why? Because we don't want the bosses to know about our shit, that's why. End of story.

This isn't a new idea: The Knights of Labor, formed in 1869 as the first attempt in the U.S. at a sort of National Labor Federation, had quite an oath of secrecy:

I do truly and solemnly swear that I will never reveal, by word, act, art, or implication, positive or negative, to any person or persons whatsoever, its [the Knights of Labor's] signs, mysteries, arts, privileges or benefits, now or hereafter, given to, or conferred on me, any words spoken, acts done, or objects intended.

The point isn't to compare the ISO exactly to a labor union or trade federation, now or in the past. But all organizations of our kind share an obvious interest in keeping some information away from the hypocrites of our ruling class, who demand such openness from us mere commoners, but refuse to abide by it themselves.

One objection to this point might be that in the age the Internet and social media, any expectation that an organization can have internal discussions is simply naive. After all, one click of the mouse, and mountains of data can be instantly published by anyone who possesses them.

This avoids the argument in favor of left-wing security by highlighting the challenges of maintaining it. Certainly the means by which we communicate have changed. Just as certainly, the advent of other technological innovations in history must have confronted people and organizations with new puzzles to sort out: How can we possibly keep our local strike committee meeting secret from the company if someone can simply run down to Western Union and send a telegraph?

Yes, the Internet has changed how we communicate and blurred the line between personal and public communication. To declare, therefore, that all information, from here on out, is inevitably and automatically public and universal is crude technological determinism. It takes the human element out of the question and leaves class outside of the context.

IN ANY case, we don't want to fetishize either openness or secrecy, but strive to make the most conscious democratic choices possible in a given situation. The fact is that organizations that seek to challenge the powerful must walk a delicate line between being open and forthright about our politics and goals, while at the same time allowing space for internal discussions about strategy and tactics, as well as the problems and challenges we face.

This space importantly includes self-criticism. Such internal criticism may be blunted if everyone knew it's likely to be published on the Internet. Rather than air internal problems, people may keep their mouths shut than risk doing damage to an organization they believe in. Closed discussions can actually further a level of openness, and automatic publicity can actually close down certain discussions.

This dynamic is perhaps even more important for broader movement activities than for internal assessment. For example, if a member or group of members are involved in workplace organizing, it would be natural for them to want to generalize their experiences for others involved in similar work across the country. Whether a discussion about a reform effort within a union, or an organizing drive in a company or an industry, untimely and unexpected exposure of such a discussion could lead to serious reprisals--people face the risk of being transferred, demoted or fired. This includes not only seasoned socialists, but people new to organizing, who may or may not be part of the organization.

The consequences of certain information, raised as part of an internal discussion that is then made public, can even be more dire for activists involved in immigrant rights or criminal justice work. Organizations of the left and working class should help each other protect ourselves against our enemies, instead of opening up opportunities for them to attack us.

ANOTHER OBJECTION to the case I've made is that leaking internal documents doesn't matter because the National Security Agency is spying on all of us and knows everything anyway. This is the second dumbest argument against left groups having a right to have internal discussions that I've heard. (I'll get to the first in a sec.)

The idea that the state's access to and/or possession of metadata means we shouldn't at least try to have internal conversations is problematic on many levels. First, this is a huge concession to the nosy elites--it would be throwing in the towel, and conceding that we should limit ourselves to critiquing the system and should forget about crafting strategies and tactics aimed at actually changing it.

The state and its repressive apparatus are well known to anyone who studies history. We know the state will operate against the working class--that is its job. But the state doesn't function in a vacuum. Factors like public opinion, the character of the media and especially the strength or weakness of social movements also affect the state's ability to carry out its agenda in various ways. In general, the rulers of society want the repressive arm of the state to appear to operate within democratic norms, or their actions can backfire on them.

Also, there are political actors other than the state to consider when confronting issues of group security. Fascists and other far-right hate groups have the potential to grow in the current climate of growing economic insecurity. These groups specifically target the left and look for vulnerabilities to exploit. All of us on the progressive side of politics should want to avoid emboldening either the state or right-wing fanatics--and that means not compromising the security of left groups, including those groups one doesn't agree with.

Then there's the dumbest objection of all, in my opinion: "If your organization is doing nothing wrong, then you have nothing to hide." This is straight-up police mentality and has no place on the left. It's the logic of stop-and-frisk--the logic of apologia for the most repressive elements of our surveillance-heavy society. Adopting the attitudes of our oppressors will not help us challenge them.

Forty or so years of a one-sided class war from above, defeats for unions and a general marginalization of the left have left our side a bit battered and bruised. In this climate, we need to rebuild a basic sense of working-class solidarity, based on useful discussion and debate, respect and collaboration, and a commitment to unity in action that respects political differences while building the strongest possible struggles.

It's also a time of reflection and retooling for the left. Six years of the worst economic crisis since the Great Depression and a deepening of the mainstream political malaise and paralysis could spell openings for a left wing challenge. We can only meet such a challenge if we keep some principles intact about debates, both internal and at large.