Author and activist Ali Abunimah explains supporters of Israel really mean when they talk about "civility" on campus in an article written for Electronic Intifada.

AS I was driving through Indiana en route to Michigan last weekend, I saw this billboard for a local sheriff's election campaign. There, above the uniformed police officer with his military-style crew cut, is the slogan "Return to Civility."

It seemed the perfect metaphor for what "civility" has come to mean on U.S. campuses: the forceful policing, at the behest of Israel lobby groups, of any discourse or activism critical of Israel.

In the wake of Israel's latest Gaza massacre, the civility police are cracking down hard. Most notoriously, administrators and trustees at the University of Illinois at Urbana-Champaign have used the excuse of "civility" to fire Steven Salaita for his strong criticisms of, among other things, Israel's slaughter of hundreds of children in Gaza.

But civility crackdowns are now breaking out across the country. Another alarming case involves a student at Ohio University.

Recently, Ohio University President Roderick J. McDavis challenged the newly elected student senate president Megan Marzec to take the "ice bucket challenge." This is a stunt where someone pours a bucket of ice water over their head on video to raise awareness of the disease ALS. 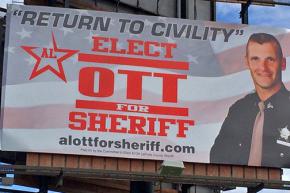 It has become a very mainstream activity, which allows the participant to appear philanthropic at no political risk (former President George W. Bush took the "challenge," inadvertently recalling his administration's use of waterboarding as a form of torture).

But what Marzec did--as Palestinians have done with their own "rubble bucket challenge"--is to subvert the meme.

She made a video in which she pours a bucket of fake blood over her head to protest Israel's abuse of Palestinians.

"I'm urging you and OU [Ohio University] to divest and cut all ties with academic and other Israeli institutions and businesses," Marzec says in the 50-second video that she posted on her Facebook page, the Columbus Dispatch reports.

"This bucket of blood symbolizes the thousands of displaced and murdered Palestinians, atrocities which OU is directly complacent in through cultural and economic support of the Israeli state," she adds. (The original instance of the video is no longer available but I am including this copy in my post because I believe people should see that it is, contrary to the lurid criticisms, rather tame, polite and indeed civil.)

Supporters of Megan Marzec should sign a petition in solidarity with her and in support of free speech at Ohio University.

To speak out for Steven Salaita, come to the "Defend the University" rally on Thursday, September 11, at Noon on the Quad at the University of Illinois at Urbana-Champaign.

Sign the change.org petition demanding that Steven Salaita be given his job back. You can also send e-mails to the members of the Board of Trustees, expressing your solidarity with Steven Salaita and support for the board to reinstate his job offer:

Susan M. Kies, Secretary of the Board of Trustees and the University: [email protected]

Marzec was quickly and swiftly denounced. The Twitter account of the Student Senate tweeted: "On behalf of the student senate, we humbly apologize for the video President Megan Marzec posted."

The campus group Bobcats for Israel and Alpha Epsilon Pi, a Jewish fraternity, called for her resignation. "In part of the video she promotes the BDS (boycott, divestment and sanctions) movement, which is anti-Semitic," one student critic told the Cleveland Jewish News.

Marzec herself has reported receiving death threats for her protest. She showed the Athens Post newspaper messages she'd been sent that "ridiculed her as a woman, among other insults," and said that she's been subjected to "a whole slew of very vile things."

But she strongly defended her protest. "It's clear to me that my video was not anti-Semitic," she told the Post. "Any reframing of the video is caused by outrage that I am standing in solidarity with oppressed Palestinians."

More than 600 people have signed an online petition in "solidarity with Megan Marzec's right of free speech to publicly state her political opinions on the liberation of Palestine." It also condemns "any attempt to employ threats and/or acts of interpersonal violence to intimidate Ohio University students into silence."

Instead, the university and President McDavis issued a campus-wide call for "civility" that criticized only Marzec.

"Her actions do not reflect the position of Ohio University or President McDavis," the university statement says. "We recognize the rights of individual students to speak out on matters of public concern and we will continue to do so, but want to be clear that the message shared today by her is not an institutional position or a belief held by President McDavis."

And then here is the "civility" punch line (emphasis added):

In a university community of our size, there are many issues that merit our attention and dialogue. As stewards of the public trust, we have a responsibility to encourage the free exchange of ideas. For it is through dialogue on conflicting views that we will move toward mutual understanding.

I take great pride in the fact that Ohio University is a community that tackles hard issues head-on. The conflict in Israel and Gaza is no exception. But the manner in which we conduct ourselves as we exercise our right to free speech is of utmost importance.

In my First Year Student Convocation address, I emphasized the idea that we are a University family. As members of a University family, we will not always agree, but we should respect one another. And when we engage in difficult dialogue on issues such as this, we must do so with civility and a deep appreciation for the diverse and resilient international community in which we live.

There is much to be said about McDavis' invocation of the "family"--with all its connotations of patriarchy, hierarchy, privacy, discipline and infantilization as a metaphor--but I will leave that for another day.

There are important unstated assumptions in McDavis' statement. Notably, he seems to be saying that by criticizing Israeli violence against Palestinians, and urging the institution to end its complicity, Marzec was somehow targeting and injuring a component of the campus community or "family."

Unless there is a brigade of the Israeli army with particularly sensitive feelings permanently stationed on campus, this cannot be the case.

Rather, the implication seems to be that criticism of Israel and its actions is deemed offensive to Jewish students. This is certainly implied by the intervention of the Jewish fraternity.

But we must always reject the equation of Jewish students with the State of Israel, no matter how often pro-Israel groups and university administrations insist on it.

THIS IS the Israel lobby's new tactic, as I have argued in my recent book The Battle for Justice in Palestine: to equate criticism of Israel or solidarity with Palestinians with "hate speech," "hate crimes" or even attacks on an individual such as sexual or racial violence that must be ultimately subject to university or juridical discipline and punishment.

In the case of Salaita, this meant the loss of his job based on libelous and speculative claims that his statements about Israel would mean students in his classroom might be endangered.

In the same vein, when Palestine solidarity groups have distributed mock eviction notices as a tactic to educate peers on campus about Israeli demolitions of Palestinian homes, they have usually faced false allegations from Zionist groups that the dorm rooms of Jewish students were "targeted."

It is in this context that Students for Justice in Palestine (SJP) at Northeastern University was banned last spring, an unprecedented act of repression that the administration only rescinded after a fierce student campaign and a national outcry. The year before they were banned, Northeastern SJP had been forced to sign a "civility statement," following an organized walkout of a talk given by Israeli soldiers.

This is the same basic idea behind the wave of complaints against various universities made by Zionist individuals and organizations under Title VI of the U.S. Civil Rights Act in recent years alleging that campus Palestine solidarity activism was making Jewish students feel "unsafe."

While the strategy has so far failed at the legal level, it is succeeding with university administrations, who are rushing to issue "civility" statements explicitly or implicitly targeting utterers of speech critical of Israel.

It cannot be mere coincidence that Nicholas Dirks, chancellor of the University of California at Berkeley, sent an e-mail to the entire campus community last week also calling for "civility."

Ostensibly marking the 50th anniversary of Berkeley's famed Free Speech Movement, Dirks said, "we can only exercise our right to free speech insofar as we feel safe and respected in doing so, and this in turn requires that people treat each other with civility."

What does "civility" mean in this context? Does it mean saying "please," "thank you," "sir" and "ma'am" to war criminals? Or does it mean electing a sheriff instead of a professor to run a university to make everyone feel "safe" and secure?

(A similar statement has also just been issued from Penn State University. No particular cause is mentioned as prompting the statement and it does not mention Palestine, but I expect to see more of these.)

Dirks, as I recount in The Battle for Justice in Palestine, was the vice president at Columbia University who, prior to taking his new job at Berkeley, boasted about his role in the witch hunt against Professor Joseph Massad.

ZIONISM IS losing its grip. It has lost the substantive debate on the past and future of Palestine in the academy. It no longer has a hold on the hearts and minds of young people the way it did in the years after the 1967 War.

Many of the Jewish students whose "safety" is being invoked to justify the campus crackdowns are joining--and in some cases leading--chapters of Students for Justice in Palestine and similar groups.

Key Israel lobby groups, as I explain in the book, see U.S. campuses as the battleground on which the future of U.S. support for Israel will be secured or lost.

Raw power--intimidation, denial of tenure, firings and other kinds of discipline--are being used to try to stop the growth of Palestine solidarity on campus.

Corporatized university administrations across the country are fully complicit in this repression. And this iron fist is being wrapped in the velvet glove of "civility."

First published at the Electronic Intifada.