Danny Katch, author of the Haymarket e-book America's Got Democracy! considers why even mainstream analysts are questioning the integrity of the U.S. political system.

MOST BIG Republican victories like the 2014 midterm elections are followed by a wave of analysis--triumphant on the right, despairing on the left--about how and why the U.S. is a conservative country after all.

But there has been a more sober reaction to this year's Republican win--probably because it is so obvious that voters are dissatisfied with both mainstream parties. Even Sarah Palin noted on her Facebook page that voters "were voting AGAINST the continued dysfunction and corruption in D.C." more than they were "voting FOR any party." (Even when she's being rational, Palin has to throw in some ALL CAPS to reassure her supporters that she's still plenty crazy.)

Palin's larger point, however, was that Republicans will win more support if they pursue hard-right goals--like repealing Obamacare and shutting down the government a few more times, even though opinion polls show this would be a disastrous strategy for the GOP.

In fact, one of the contradictions of the midterm elections was that a number of referendums were decided for the progressive option, while more conservative candidates won races for political office. "So voters want a higher minimum wage, legal pot, abortion access and GOP representation," tweeted FiveThirtyEight analyst Ben Casselman. "Ok then." 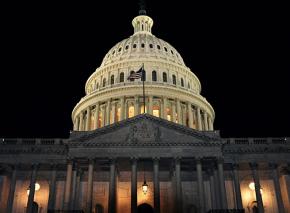 As the snark indicates, Casselman explains this contradiction with the faulty logic that the outcome was what "voters want"--rather than the consequence of a faulty political system in which one party runs right and the other runs righter. Casselman's is the conventional understanding--shared by liberals and conservatives--that the flaws of American politics can ultimately be blamed on voters: they're the customers, and politicians are merely competing to get their business.

But the idea that the U.S. government is a customer-driven business has gotten harder to maintain in an era when congressional approval ratings drop into the 10 to 20 percent range, yet members of the U.S. House of Representatives are re-elected at a rate of nearly 90 percent.

The deep dysfunction of our democratic system--in fact, the question of how much this country can even be considered to be a democracy--is a growing topic of conversation in places one might not expect to hear such radical talk.

Earlier this year, Martin Gilens and Benjamin Page, professors at Princeton and Northwestern Universities, made headlines with a study concluding that "economic elites and organized groups representing business interests have substantial independent impacts on U.S. government policy, while average citizens and mass-based interest groups have little or no independent influence."

Michael Glennon, a former staffer on the Senate Foreign Relations Committee, released a book last month arguing that the U.S. now has an "emergent autocracy" that is the result of "a bifurcated system--a structure of double government--in which even the president now exercises little substantive control over the overall direction of U.S. national security policy."

The arguments being put forward by Gilens, Page, and Glennon are probably familiar to readers of SocialistWorker.org. But it's unusual for America's vaunted democracy--our 200-year-old state religion--to be questioned so brazenly in the mainstream.

THERE ARE two main reasons why this country's democratic bona fides are coming under scrutiny.

The first is that the gravity-defying increase in the wealth of the tiny few has made it almost impossible to ignore how economic inequality spills over into political inequality.

The number of billionaires in the U.S. has risen from 13 in 1982 to over 400 today. To understand what this means, you first have to understand just how much a billion dollars is.

The typical family in the U.S.--forget most of the rest of the world--has about $75,000 in net worth. A billion dollars is 13,000 times more than that. If that typical all-American family were to line up its wealth in 75,000 individual dollar bills, lined end to end, it would extend 7.2 miles. Not bad, right? But if ex-New York City Mayor Michael Bloomberg showed up and did the same thing, his $25 billion in wealth would stretch all the way to the moon...and back...five times.

Down on Earth, that kind of money can buy incredible political influence. Since a billionaire has at least 13,000 times more money than most of us, he can throw around $13,000 the way we would spend a dollar. A hundred bucks for us is $1.3 million for him, which can easily buy the support of both candidates in most congressional races. Or he could just spend the equivalent for us of $10 on $130,000-a-year salaries to buy talented people to promote his agenda via think tanks, lobbying firms and bogus grassroots organizations.

A billion dollars, in other words, bestows god-like powers to transform the political landscape, and the rise in the number of billionaires has created a new race of supermen--from Koch to Gates--who make a mockery out of quaint democratic notions like "one person, one vote."

The second reason that U.S. democracy is being questioned is the widespread disillusionment in the Obama presidency.

It's hard to imagine a more dramatic personnel change than the one that occurred in the White House at the start of 2009. A not-too-bright heir to a political dynasty and his dark overlord of a vice president were replaced by a thoughtful liberal professor who also happened to be the country's first African American president.

If ever a democratic election were going to have a profound impact on the direction of the country, it seemed like that would be the time. But today, just about everyone who isn't on the payroll of the Democratic or Republican Parties would agree that it didn't.

Glennon explained in an interview with the Boston Globe that he wrote his book because he "was curious why a president such as Barack Obama would embrace the very same national security and counterterrorism policies that he campaigned eloquently against."

Similar books could be written--and have, in fact--about Obama's bank bailouts and record number of deportations.

THE RECENT attention on America's democracy deficit is a good thing. But it's important to understand that this isn't a recent problem, and it isn't one confined to the U.S. No society in which a minority class holds the vast majority of wealth and political power can tolerate anything more than partial democracy. Therefore, the state has to stand above us, beyond our control.

Every state hides its unaccountable authority over us by claiming to be so much a part of us that accountability is unnecessary. The U.S. government refers to itself in court cases as "The People"--just as the Stalinist dictatorships like China and North Korea call themselves "People's Republics."

This isn't unique to the modern world. Frederick the Great of Prussia justified his monarchy by claiming that "the prince is to the nation he governs what the head is to the man; it is his duty to see, think and act for the whole community."

In truth, the first role of governments has always been to see, think and act for the ruling class of its time, be it slave owners, feudal aristocrats or transnational corporations. As Karl Marx and Frederick Engels wrote in the Communist Manifesto, "The executive of the modern state is but a committee for managing the common affairs of the whole bourgeoisie."

One of the endlessly recurring debates in American politics is about something known as "the role of government." Conservatives are usually the ones arguing for "small government," and yet they are huge fans of the military, police, border patrol and spy agencies that make up by far the largest part of the government bureaucracy.

These armed agencies are the repressive state apparatus at the heart of every society where a few have a lot and a lot have a little--which is why Republicans want this part of the state to be as large as possible. What they denounce as tyrannical "big government" are those additional services taken on by 20th-century governments in response to popular demand--caring for the elderly and the sick, curbing pollution, making sure the food supply is safe, etc.

Liberals--some of them at least--rightly reject the idea that the state's only function is repression, and assert that government can play a positive role in promoting human welfare. Liberals--again, the genuine ones who actually differ from conservatives--hold up the decades after the Second World War as a model, when rich people and corporations paid much higher taxes, unions were at the peak of their power, and a social safety net was assembled through programs to help the poor, sick, unemployed and elderly.

This is a much better state of affairs than what exists now. But we should think twice before proclaiming as a model an era when the U.S. government ensured the creation of whites-only suburbs and Black urban ghettos, persecuted communists and other leftists, brought the world to the edge of nuclear annihilation, and launched wars and coups in Korea, Vietnam, Guatemala and Iran, to name just a few victims of American imperialism.

So even in the golden age of American liberalism, the U.S. government was not an agent of the people. And it certainly isn't now--when it imprisons more of its people than any nation in the world and builds multibillion-dollar data storage facilities to be able to spy on all of its people's phone and Internet conversations.

IN HIS fascinating series of books about Karl Marx, the U.S. socialist Hal Draper pointed out that in Marx's time, the word "democracy" was just coming into popular use and had multiple meanings. In addition to referring to a political system based on elections and individual liberties, democracy could also mean the popular will and mass movements.

The 19th century Chartist movement in England, which fought for voting rights to be extended to the working class, referred to itself as "the democracy." There is an echo of this older usage today in the popular protest chant: "This is what democracy looks like!"

For the most part, however, our definition of democracy today--and our understanding of it--has become unfortunately limited to a very narrow set of laws.

Socialists retain the older, more multi-faceted definition because that one makes it clear that democracy is something that has to be constantly fought for, even if we live in a...democracy.

Understanding that the state is, at heart, a hostile force doesn't mean that we should be indifferent to fights to make it more democratic. We can strengthen our democracy by winning reforms in our electoral laws--like campaign finance reform or ending voting restrictions on immigrants and people with felonies. But we can likewise do so by building strong protest movements and political parties independent of both the Democrats and Republicans.

Ultimately, however, full democracy--meaning a society in which the majority gets to decide the most important questions--is impossible under capitalism or any other system of minority economic rule.

That's why many of history's most committed fighters for democracy--from Karl Marx to Eugene V. Debs--found themselves turning into socialists the more deeply they pondered the question of how to achieve it.