What happened in Marysville?

Ragina Johnson looks at the variety of factors that give rise to tragedies like the shootings at a high school in western Washington state.

ON OCTOBER 24, 14-year old freshman Jaylen Fryberg walked into the lunchroom at Marysville-Pilchuck High School in Washington state, north of Seattle, and opened fire on five of his close friends, some of them his cousins. He then took his own life.

As of this writing, five young people, Zoe Galasso, Gia Soriano, Shaylee Chuckulnaskit and Andrew Fryberg, along with Jaylen Fryberg, have lost their lives to the increasingly violent world we live in.

Like people everywhere, Jaylen Fryberg's family and friends are trying comprehend what could have caused this horrific tragedy. So far, very little is known about his motivations--but there is still an incredible amount of speculation in the media anyway.

The guesswork about his motives has ranged from questions about his mental health, to speculation that Jaylen was a jealous ex-boyfriend, to blame heaped on his family for not teaching him right and wrong, and on his Native American heritage and affiliation with the Tulalip Tribes. Needless to say, the discussion has been thoroughly tainted with racist stereotypes. 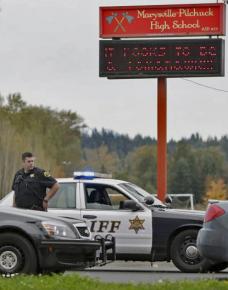 In the aftermath of the shooting, there are have been death threats issued against Native American students in the area around Marysville. How could this be a response by anyone--to threaten a community and children who have suffered an unbearable loss?

It's sad that the Tulalip Tribes felt compelled by the pressure to state the obvious: "Even though we may never know why, there can be no justification for taking the lives of others. These were the acts of an individual, not a family, not a Tribe."

IT WON'T come as a surprise to SocialistWorker.org that youth of color, whether they are victims of or participants in criminal situations, tend to get painted differently by the media. In the aftermath of the shooting, Jaylen's name was released by most news outlets, though he is a minor, and his photos and postings from social media were plastered around in stories depicting him as a gun lover, a hunter and a hoodie-wearing "thug."

Native culture has become the subject of critique--articles, accompanied by photos showing him in ceremonial dress, state that Jaysen saw himself as a "warrior." There is no recognition that fishing and hunting rights are a part of the treaties that the U.S. signed with tribes and nations, and that Native peoples, as individuals and collectives, have had to struggle to defend these rights as important cultural traditions often passed down through generations.

One Seattle Times article implies that the Tulalip Tribes live in a kind of "post-racial" environment because of their economic success:

While poverty, joblessness and other social ills have helped push Native American youth suicide rates to more than double the national average, the Tulalips are among the country's most financially successful, sophisticated and best-run tribes. The tribes' casino and retail developments help drive Snohomish County's economy, and its government has won awards from Harvard University.

At the same time, the article suggests that, while Jaylen Fryberg's heritage didn't by itself contribute to his act of violence, maybe straddling two cultures did:

Jaylen Fryberg, like many Native American children, lived with a foot in each of two worlds. There was the hormone-fueled community of a suburban high-school freshman, where the polite, fun-loving chatterbox played football and video games and shared every nuance of adolescent social longing on Twitter.

Tragedies like the one that took place in Marysville tend to be seen as the isolated acts of individuals. Little of the instant analysis produced in their aftermath considers the effects of living in a violent world, and how that shapes the individuals' views about themselves, not to mention how they handle conflict and disappointment.

Fryberg left no notes or Internet postings to explain his actions, so the media have seized on comments on Facebook and Twitter to build up theories that he was sad and frustrated by personal conflicts in his life, including a potential breakup. Some reports interviewed psychologists who speculated that Fryberg was at the beginning stages of a mental illness--something often held up as a cause in acts of violence.

Writing in SocialistWorker.org about the Sandy Hook school shootings in December 2012, Nicole Colson pointed out the problems with this theme in analyzing 20-year-old Adam Lanza:

We'll be told that Adam Lanza was mentally ill--but we won't be told that people with mental illness are far more likely to be victims of violent crime than to be perpetrators of it. We'll hear how easy it was for Lanza to gain access to his mother's substantial gun collection--but that doesn't explain why he used them. Some reports will blame his mother--others will focus on the video games he reportedly liked to play.

[M]edia speculation about Lanza's reported autism and personality disorder are particularly irresponsible in a society that routinely treats those with mental illness and disabilities as "problems" to be contained, rather than full human beings--while providing next-to-no resources to support them or their families.

OTHER MEDIA reports about the Marysville deaths focused on the proliferation of guns in U.S. society--with gun control laws as the proposal for preventing future school shootings.

This may be understandable in a country where more than 30,000 people die each year of firearm deaths. But this analysis lacks an understanding of what causes people to use guns--why this society is a breeding ground for these types of tragedies because of the deep alienation felt by young people.

Youth today face a lot of pressure thinking about their future in an economy where there is a declining likelihood that they will find a good-paying and secure job, even with a college degree, much less just a high school degree. Meanwhile, the media encourages teenagers to believe success in high school is about dating the right person, having the right friends or possessing the newest iPhone.

For Native youth, there are even more complex social dynamics at play. We need to look at how a legacy of institutional racism and bigotry that continues to this day affects how Native people view themselves and their self-worth.

An article published in the Everett, Wash., newspaper a few weeks before the tragedy was titled "Marysville schools may rethink Tomahawk mascot"--in an accompanying photo, students at a volleyball match were shown doing the "tomahawk chop"--a racist stereotype of "Indian warriors."

While some people may try to defend this as a flattering cultural expression of Native people, the movement against racist mascots--including the best-known effort right now to get the Washington, D.C., football team to change its racist slur of a name--has exposed how false this is.

The word "tomahawk" has been used to label something else incredibly violent in the world we live in: Tomahawk missiles carry 1,000-pound "precision" warheads and are used by the U.S. government in its wars around the world, including in Iraq and Syria right now.

This points to another violent feature of the world today--endless wars, drone strikes and military occupations in which millions of people have died so that the elite of this country can gain control of the world's resources.

Stereotypes like "tomahawks" that depict Native people as violent, whether in the past or present, cannot be seen as harmless. As one person wrote at the blog Righting Red, such objects "undeniably link Native Americans with imagery rooted in violence, aggression, and stereotype. If you've been paying attention at all, you know that study after study after study prove mascots dehumanize Native Americans, and are particularly detrimental to Native youth."

This explains why the fight against racist mascots has deepened over the past year into a general movement for Native self-determination, connected to current struggles around environmental justice and land rights.

THERE IS another component to understanding the shootings at Marysville-Pilchuck High School.

If they were in any way retaliation against an ex-girlfriend, as has been suggested in many news reports, they have to be seen in the context of the war on women and a general rise of sexism and sexual violence in society, evident from the policies of governments at all levels on down to learning institutions.

As we know from outrages like the gang rape in Steubenville, Ohio, jock culture in high schools, encouraged by factors far outside the education system, breeds sexism and violence against women. You only have to look at the number of survivors who have spoken out against their attackers, including those who were student athletes, to see the connection to the rising epidemic of sexual violence.

Unfortunately, some writers who recognized the Marysville shootings as potentially connected to the issue of violence against women have nevertheless seen them in isolation from questions of Native oppression and racism.

For example, Mario Guido, writing at the Mommyish website, insensitively put the blame on Fryberg's parents instead of where it belongs--a society which fosters a climate of sexism, racism, and violence. Guido wrote:

We could very well be calling Fryberg a depressed sociopath with a bloodlust for a girl he felt an unnatural ownership over. Instead, we're calling him the heartbroken Homecoming Prince. There is a lesson here for parents of girls and boys alike; this is what happens when you neglect to teach boys that the object of their affection isn't their property...

Ignoring the lesson parents should be learning here--to teach their children that people they like are not objects to be won or owned--is a grave mistake and makes the loss of these lives even more senseless.

But these shootings can't be reduced to what lessons Jaylen Fryberg's parents taught him about relationships or anything else. A tragedy like this must not be seen in isolation from the world that shapes young people's consciousness and actions. They are the symptom of a much larger disease and an indictment of the society we live in.

NATIVE PEOPLES in Washington state suffered another tragedy made worse by racism when actor Misty Upham, a member of the Blackfoot Tribe, was found dead of injuries suffered in an apparent fall--her body was found at the bottom of a steep cliff, near where her parents were living on the Muckleshoot Reservation, less than two hours from the Tulalip Tribes.

Initial reports suggested Upham committed suicide, but her family and friends believe the fall was an accident. They are calling out local police for refusing to help them search for Upham, despite many desperate requests. According to Tracy Rector, a friend of Upham's who is serving as a family spokesperson: "Unfortunately, it feels like 1950s racism in many ways. The family is concerned that Misty was considered just another Native person and treated as such. Even that is unacceptable. Native lives matter. It doesn't matter what her skin color was." According to the Washington Post, Rector said there is "a long history of tensions between Native people and law enforcement in Auburn," which is why police may have ignored the missing persons report.

The Marysville shootings are one more horrific argument for why we need to build and solidarize with movements that struggle against the continued oppression of Native peoples and women in this country and beyond. We have no other choice but to fight for a world where such acts of desperation don't happen--and where youth feel hopeful for themselves and their futures.