The relentless focus on "violence" by anti-racist protesters glosses over the massive use of state violence against those protesters, explains Ryan de Laureal.

THE PROTESTS against police murders of unarmed Black citizens have sparked a long overdue discussion in the mainstream media about racial injustice, much as the Occupy Wall Street movement kick-started a discussion about class and inequality. These protests have brought to light the racism still rampant in American society and have forced the country to acknowledge the need to radically restructure and reorient our society toward the needs of everyday people.

In some cases, surprising sympathy came from generally pro-establishment news sources. CNN broadcasters are under fire for raising their hands in the air and holding a sign reading "I can't breathe" during coverage of large protests in New York City in December. "We want you to know that our hearts are out there marching with them," said CNN commentator Sally Kohn.

Time magazine published an article on its website titled "In Defense of Rioting," in which Florida-based contributor Darlena Cunha explains that explosions of anger like those around Ferguson have peppered American history and have been an important way that "marginalized communities," especially those suffering from racism, have forced social change. 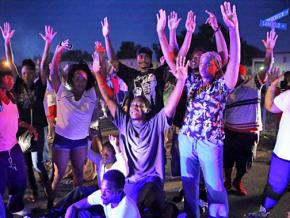 Even the right wing has been forced into discussion of the issue. Some important right-wing ideologues, such as Bill O'Reilly, while they may have vilified the initial Ferguson protests, have had to express concern with the legitimacy of the Eric Garner verdict. Nancy Grace, in what she described as her first time siding against a cop, called Darren Wilson's story unlikely, stating that it "doesn't add up."

Valuable investigations have been undertaken by some mainstream news sources into the structural racism present in the counties around Ferguson, where overpolicing of Black communities is used to create revenue for the state. But the bulk of mainstream media coverage has focused on the violence and disorder of the recent protests. On December 8, for example, the sensational CNN headline reads "Chokehold death protests turn violent." At Fox News, an even clearer pro-police bent: "Two police officers injured as Berkeley protest turns violent." One cannot help but wonder how many protesters were beaten and injured by the police. As it turns out, quite a few.

THESE TWO reports about demonstrations in Berkeley, California, against the non-indictment of the police officer who killed Eric Garner focus entirely on violence and vandalism by the protesters. They make no mention of the character of the rally itself, the grand jury decision announced the day before, the specific demands of the protesters, or whether the violence began in reaction to a police crackdown.

The lead-in to the CNN report sums up this general tendency, which can be found to varying degrees in many mainstream media reports of recent demonstrations: "From the streets of California to the shopping malls of New York, protesters are making sure no one forgets the case of Eric Garner...But some are choosing to do so more violently than others."

In the Fox News piece, the names of Mike Brown and Eric Garner are not even mentioned. The protest is described in passing at the beginning of the report as a "demonstration against police killings of unarmed Black men," and after this brief mention of the context, the rally itself and the reasons why it took place are never referred to again. The rest of the report is devoted to descriptions of acts of vandalism and protester violence, and the only quote comes from Berkeley police spokesperson Jenn Coats, who states that the authorities began a crackdown in response to the actions of a "small splinter group."

Berkeley students say that the demonstration got violent after police assaulted the protesters. Firsthand accounts at independent and social media outlets largely confirm this view, painting a picture in stark contrast to mainstream reports.

A cellphone video--one of many--taken by a demonstrator shows a group of people marching with their hands up as they are blocked by hundreds of police in riot gear. Amid cries of confusion, the protesters are charged and beaten down violently by an impenetrable wall of militarized force. Loud cracks and ear-shattering explosions, followed by smoke, pierce the air and shake the frame of the camera, as the cops fire tear gas, rubber bullets and flash grenades. Scores of police continue to charge and assault the protesters with batons. The demonstrators are forced to turn and flee in panic.

As during the Occupy movement, undercover police infiltrated the protests. In Oakland, an undercover highway patrol agent pulled a gun on protesters after a confrontation in which his and his partner's cover was blown. Police departments use these undercover agents to gather intelligence on the demonstrations and facilitate police actions against protesters.

DESPITE THE frequency of one-sided mainstream media reports, it is significant that they do not represent the only dialogue about Ferguson. The length and intensity of the protests have forced the issue to the front of the American consciousness. The murders of Mike Brown, Eric Garner, Tamir Rice and hundreds of others just like them--and the system that continues to make their deaths possible--can no longer be ignored. This in and of itself disproves the notion that protesting is a futile gesture. In fact, if the last six years have proven anything, it is that voting for Democratic politicians, who in many cities are the figures overseeing the police crackdown on the right to dissent, has become the futile gesture.

In the case of Berkeley, the one-sided mainstream reports serve the interests of the established systems of state and corporate power in very concrete ways. First of all, they help to discredit the protesters, not because they mention vandalism that occurred at these demonstrations, but precisely because they fail to mention anything else. This technique is pursued so persistently that significant details about the events themselves must be left out, such as the fact buried at the end of some of the accounts that "violence" (by which the reports mean property damage) was participated in by "small splinter groups."

Of course, if "violence" was not condoned or practiced by a majority of the demonstrators, then the question of what were the stated goals and practices of the majority of those present becomes even more important. But, in order for the corporate media's reporting of these kinds of events to suitably advance the interests of the establishment, it is necessary for them to completely elide any in-depth discussion of the protests themselves.

Focusing on the violence of a "splinter group" and purging all other details of the rally is also an effective way of presenting the entire protest as violent and chaotic, even if, in reality, the bulk of the protest had been peaceful. This media technique helps to drive a wedge within the movement itself, creating an opportunity to splinter the more pacifist from the more militant wings. It also helps to alienate those in the general public who may be sympathetic to the protesters, but who do not condone such destructive and provocative tactics.

Ultimately, while these reports may show some of what occurred, they suffer from an unfortunate irony: they focus on incidents of protester violence while ignoring massive state violence. It is a pertinent fact that the state is willing, and able, to resort to the utmost heights of repression and injustice in defense of its own power and the status quo. What is so sinister is that it can do so with total impunity, supported by the courts, and largely with the complicity of an "independent" media.