Give Mumia the medical care he needs

Incarcerated journalist and former death row prisoner Mumia Abu-Jamal is back in a Pennsylvania prison after several days spent in an intensive care unit of a nearby hospital, where he was rushed with a medical emergency last week. Now, Mumia's supporters are demanding answers about why his health is badly deteriorated and why prison officials are failing to provide adequate care for America's best-known political prisoner.

Johanna Fernandez, is a professor at Baruch College, a member of Educators for Mumia and a longtime social justice activist. She spoke to Eric Ruder about Mumia's condition and what his supporters are doing to make sure he is safe.

WHAT CAN you tell us about Mumia's condition?

MUMIA COLLAPSED in the infirmary of the prison on March 30. He walked himself to the infirmary that morning because he wasn't feeling well. He was immediately rushed to the intensive care unit of the Schuylkill Medical Center in Pottsville, Pennsylvania.

I visited him there on Friday, April 3, and this was the first time I had seen him personally in three months. Mumia had lost approximately 80 pounds since I saw him in early January. His speech was intermittently slurred. His skin was blackened all over, except his face. His entire body has been ravaged by a severe eczema outbreak. And he couldn't breathe by the end of a one-hour visit, and was severely distressed.

When he arrived at the hospital, he registered a blood sugar level of 779. Just to give you perspective, you go into a diabetic coma at 800. So he was in diabetic shock and close to a diabetic coma, which is potentially fatal.

He remained in the hospital for three days. On Wednesday, April 1, at 7 p.m., he was transferred back to the prison's infirmary, despite the fact that he was still dangerously ill. That was confirmed by his son and his brother, who visited him on that day. His brother, Bill Cook, reported that Mumia was shaking throughout the visit, had labored breathing and was generally in bad shape. 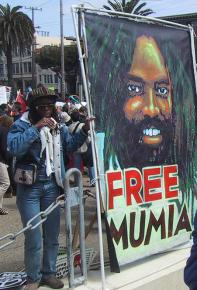 His transfer back to the prison was an attempt to sever Mumia from the widespread attention this recent crisis has garnered in the media.

We visited him again on Friday, April 3, and he was brought to the visitation room in a wheelchair--but we should not have seen him there. We should have visited him in the infirmary, because his condition was so fragile. His condition appeared worse than when we saw him in the hospital four days earlier.

FOR HOW long has his health been deteriorating?

WE'VE KNOWN that he's not been well. Since early January, Mumia has been complaining about a skin problem, which was diagnosed by the prison infirmary's doctors as a severe case of eczema.

An important detail here is that in early January, the guards had to shake Mumia out of a deep sleep during count, and for not being awake during count, Mumia was punished for two weeks. He couldn't make phone calls, have rec time in the yard or receive visitors.

His deep sleep was one of the first symptoms of his diabetes. Diabetes is not rocket science. He lost a lot of weight, he was lethargic and unable to stay awake, and he developed this severe skin condition, which we now have learned are the many symptoms of diabetes.

If you can’t be there in person, call John Wetzel’s office at 717-728-4109 to demand that Mumia’s life be saved and that he be allowed to consult a team of medical specialists selected by his family and supporters.

Participate in a national day of action on Friday, April 10 by organizing a local action in your city, town or campus. There will be events each Friday culminating on Mumia’s birthday, which is on Friday, April 24.

Organize a screening of one of the several documentaries about the life of Mumia Abu-Jamal, such as Long Distance Revolutionary, Justice On Trial, In Prison My Whole Life and A Case for Reasonable Doubt.

He was given medication for the eczema that seemed to exacerbate his condition. His skin blew up and then ruptured, and at that point, he was placed in the infirmary for two weeks. In February, they conducted a battery of blood tests, and no doctor seemed to pick up on his diabetic state. Mumia has yet to be seen by a diabetes specialist, and the doctors at the hospital repeatedly told us that they didn't have a diabetes specialist there. Yet he was sent back to the prison without being able to consult a specialist.

So our central demand right now is that he be seen by an independent team of medical specialists chosen by his family and supporters.

To give you a sense of what he looked like when his skin condition got worse, Mumia likened his skin to that of an elephant. His skin was raw and bloody everywhere. He was not taking visitors because he was in so much pain, but he was also lethargic and falling asleep during visits. So unfortunately, we didn't see him for approximately three months because he was so sick.

THIS IS shocking treatment, especially considering how many people know about Mumia's situation. Why is this happening?

AS YOU know, Mumia came close to execution twice in the 1990s, and recently in 2011, the federal courts determined that his death sentence was unconstitutional. We saved Mumia's life because there was a movement in the streets, both nationally and internationally, that stopped the execution set for August 17, 1995. We won.

We stopped the execution, but now it appears that the state is attempting to execute him through medical neglect. Again, it's baffling how a team of doctors in the prison infirmary was not able to determine that his health condition was severe and potentially fatal. And we're talking about diabetes, a condition which is relatively easy to identify. Yet the prison doctors never gave him that diagnosis.

On the morning of April 3, we were told that we could not visit Mumia, but we proceeded to drive over there anyway. I had a number of discussions with the superintendent's office, and I overheard one of the operators say that the phone was ringing off the hook. Within an hour, they called me back and said that a team of five could visit at once--that's when they wheeled him into the visiting room.

HOW OLD is Mumia now?

MUMIA is now 62, and it's important to underscore that his case illustrates a dirty little secret in the era of mass incarceration in the U.S. Prisoners are made ill by the criminal justice system. The diet that prisoners receive is atrocious--filled with carbs and sugary drinks. Many prisoners develop diabetes behind bars. There is no history of diabetes in Mumia's family. We're actually doing some research right now to collect some of the statistics regarding diabetes among prisoners.

To add insult to injury, prisoners don't get the medical care that they need in the system that's prone to making them ill--not just as a result of bad nutrition, but also the stress of imprisonment. One statistics shows that the life expectancy of a prisoner is 10 years less than one would otherwise expect.

So this is a human rights crisis of epic proportions. It's cruel and unusual punishment. And it's a crime against humanity to deny people proper medical attention. If this can happen with the most famous prisoner in the world, who has an international movement behind him, clamoring to save his life, we can imagine what life is like for ordinary prisoners across the country.

MUMIA IS also one of a number of U.S. political prisoners who have spent decades behind bars because they dared to resist the oppression of their people by the U.S. government. The American Indian Movement's Leonard Peltier, who also has diabetes and has suffered a stroke, comes to mind.

YES, JAMIL Abdullah Al-Amin, formerly known as H. Rap Brown, also comes to mind. There are quite a number of political prisoners today who are seriously ill. Russell Maroon Shoatz, a former Black Panther, has cancer; Jamil Al-Amin has cancer; and there are others. And they are in prison because of their politics--because they challenged the American empire at the height of a crisis in American society, a crisis of U.S. legitimacy the world over, during the Vietnam War and in the years that followed.

These men and women are being punished for fighting against empire, domestically and internationally, and a disproportionate number of them are former Black Panthers, like Mumia and Al-Amin.

Mumia was hospitalized in Pottsville--the heart of deindustrialized America. Loic Wacquant wrote an article in a volume on mass incarceration that Mumia and I edited, which points out that the corrections industry in the U.S. is the third-largest employer in the nation.

What's tragic about this situation is that when we got to the hospital where Mumia was, we found it in the middle of nowhere. The area is a wasteland--it's poor, beaten down and predominantly white. The prison is clearly a major provider of jobs in this area, and while some whites have been employed by the system of incarceration, the area in its totality remains impoverished.

Everyone at the hospital was white, the guards who were lording over Mumia at the hospital looked like caricatures of skinheads. They had tattoos everywhere on their bodies, up to their faces. This must be a team of security people who were contracted for this situation. The issue of racism and the ways in which they've divided both to conquer each was thrown into sharp relief at this moment. And those of us visiting Mumia were the only people of color there.

The last time Mumia was in a similar situation--hospitalized, vulnerable and behind enemy lines, so to speak--was December 9, 1981, when after surgery to treat a gunshot wound inflicted by police, he awoke to a police officer stepping on his urine bag. So this most recent episode has been a horrific repeat of this scenario. He passed out at the prison and awoke at the hospital surrounded by four scary-looking guards. His trauma is intense.

When I arrived in the hospital, the nurses were somewhat friendly, and they agreed to deliver a note to Mumia to let him know that we were there, but the guards didn't allow it. So the nurses had to go through the guards in order to get to Mumia, and he was shackled to the bedpost throughout the crisis.

This is cruel and unusual punishment, terror deployed by the state, and a transparent attempt to kill him. There's no doubt in our minds about this. The fact that he spent the last three months in a worsening condition until he collapsed and had to be taken to a hospital is just testament to an attempt at execution by medical neglect.