The government, the party and the people

Greece's left government will soon be faced with either paying foreign debts or wages and pensions for state workers, as the European elite increase the pressure to capitulate to the domination of the "institutions"--the new term for the Troika of the European Union (EU), European Central Bank (ECB) and International Monetary Fund (IMF).

In their agreement with Eurozone finance ministers in February, Prime Minister Alexis Tsipras and Finance Minister Yanis Varoufakis made major concessions on SYRIZA's pre-election commitments not to extend the Troika's bailout program and to reverse austerity. But that wasn't enough--the Eurozone is demanding the full implementation of previous and new measures before it releases further funds, including money owed to the Greek government. Plus, the media are reporting that Eurozone ministers are pressuring Tsipras to get rid of left-wing forces within the party and the government.

Antonis Davanellos is one of the best-known figures of SYRIZA's left wing. He is a member of the Internationalist Workers Left (DEA) that co-founded the Coalition of the Radical Left 10 years ago, and currently a member of SYRIZA's Central Committee and Political Secretariat. In this article for DEA's newspaper Workers' Left, he emphasizes the importance of the party's rank and file and its grassroots organizations in the struggles that lie ahead.

DURING THE period since the elections of January 25, we have seen daily that SYRIZA may have won government office, but it is not in power.

The relentless opposition from the pockets of real state power--including the characteristic challenges of top officials within the economic and judicial bureaucracy, but also the alarming actions of the Naval Special Forces teams [who chanted far-right nationalist slogans during the annual Independence Day march on March 25], should remind everyone, but especially the leadership of SYRIZA, of the importance of the decree of the party's founding congress--that a "government of the left" isn't the final destination, with the task of "saving the country," but instead a transition point on a road that must lead toward socialist liberation.

The weaknesses of the SYRIZA-led government's position are weaker still if viewed in terms of the international balance of power. The brazen blackmail of the European "institutions" and the International Monetary Fund (IMF) is designed to force the government to choose between direct subordination to the lenders or rapid collapse. 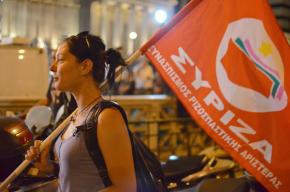 To paraphrase a famous saying from the time of the Russian Revolution--one that we can appreciate today: Without a transformed policy in Europe, without the outbreak of a political resistance movement led by the left in Spain or Ireland or France or Italy, we will perish.

This reality places a clear obligation on the members and leaders of SYRIZA, among many others. Our policy must be to maintain an active call for a Europe-wide uprising to overthrow austerity.

The awareness of the difficulties we face and the need to translate these aims and obligations into concrete action are not unfolding in conditions of our own choosing. The decline of the mass struggles of the 2010-12 period, which created the mass support for SYRIZA and eventually propelled it into office, has created a lull--the temporary waiting period while the effectiveness of the electoral road to overthrowing austerity is tested.

THIS ASSESSMENT leads directly to the crucial role of SYRIZA as a party.

In the mainstream media, the party is depicted in a negative light: as a dead weight that prevents its leadership from taking bold action (action to the liking of the lenders and markets, of course); as a nest of fossilized Marxists how won't allow the enlightened leaders of the government and the state to make the necessary overtures--for example, to the To Potami party--and guide the government safely to the calm waters of the center left, with an acceptance of the European lenders' oversight of government policy and a commitment to remain in the euro, no matter what.

Indeed, the party of SYRIZA does have this important "defensive" role to play. Under the conditions of vast internal and international pressures, it is an irreplaceable factor for enabling the government to remain connected to the original policies and program SYRIZA was founded to stand for. Precisely because it can require accountability, the organization of the party at its base, among its rank-and-file members, must be maintained and decisively strengthened.

But a defensive role is not enough. The party organizations of SYRIZA must take aggressive initiatives, attempting to mobilize a mass challenge against our common political opponents. These initiatives can press for radical change and social gains based initially on SYRIZA's campaign commitments made last year at the Thessaloniki Internationa Trade Fair, but also more comprehensively in the SYRIZA program from its founding conference.

For example, the government's capacity to resist internal and international pressure for privatization will depend directly on mobilizing mass opposition to act against the HRDAF [the Hellenic Republic Asset Development Fund, the state-run agency in charge of privatization], in the defense of public spaces and resources, to stop the crime in Skouries [a village near Salonika, where a local movement is opposing the sale of a gold mine] and so on.

The ability of the government to resist further destruction of the public health system will depend directly on whether and how SYRIZA members and base organizations take the lead in the protests and public discussions of resistance, speaking to the demands and expectations of health workers in particular and the working class majority in need of a public hospital system.

These initiatives should be planned carefully, but they must also come decisively and quickly, because time is not on our side.

This insistence on a radical left program, on standing for the people, and on popular mobilizations is the only way forward for SYRIZA as a party. In fact, it is the only way forward for the government, caught as it is between the Scylla and Charybdis [a reference to a Greek myth meaning the same thing as "between a rock and a hard place"] of local and international capital.

The mainstream media regularly display their contempt for the Marxist-radical wing inside SYRIZA and demand that the party's leaders eliminate it as a condition for being recognized as "reliable" and "realistic." This wing within SYRIZA is real and with more influence than many media analysts acknowledge. It has demonstrated many times that it is a valuable and irreplaceable factor in the political dynamic of SYRIZA--far more so than is the norm for mass political parties.

The many people who are not connected to any tendency within SYRIZA, but who look to the party's mobilization based on a radical left program--this is the power that lead a way forward. The road ahead must start with fighting for and achieving what we promised before the election, but continue toward the broader objective of overthrowing austerity, once and for all.