A vision of a shared humanity

The makers of the new Netflix series Sense8 have set a high standard to meet in their planned five-year story line, writes reviewer Amy Muldoon.

JOY IS one of the riskiest states to depict in filmmaking. The potential to fall into silly sentimentality warns off most comers. But the Wachowskis, who changed the action movie game with The Matrix, have never ducked a challenge. Their latest project on Netflix, Sense8, deals more in big themes and emotion than clever effects and shares more with Cloud Atlas than their action movies.

With a talented cast and crew, a seemingly bottomless budget and an intriguing premise, Sense8 defies many of the formulas of popular dramas. While Sense8 has garnered major attention for its very queer depiction of identity and sexuality, a great deal of the pleasure in watching is seeing the profound connections between very different people and the joy of sharing that experience. 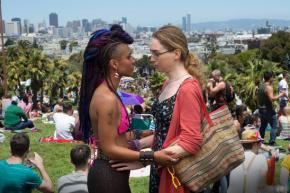 The Wachowskis and award-winning comic book writer and creator of Babylon 5 Michael Straczynski make good on the promise that many shows since Lost have attempted: a global cast that gives equal time to diverse characters. They even bring back Lost's Naveen Andrews as Jonas, another sensate outside their cluster.

Naturally there is a shadowy conspiracy of scientists and doctors who want to hide/control/eliminate these evolutionarily divergent humans. The main through-line of the plot is understanding this threat and keeping members of the cluster out of their clutches, which draws on all the various talents of the eight.

It would be a big enough challenge for any group of people, but this group already has plenty going on in their lives, between navigating AIDS in Kenya, unwanted betrothal, a failing family business and being in the closet. Sense8 is enormously ambitious in this regard, and unfortunately for the first few episodes struggles to establish pacing that serves the various threads.

It's unclear watching the series if the creators are purposefully pushing the envelope of what to expect now that serial shows are freed from the weekly installment format, and are often watched in multi-hour binges.

However, those who push past the clunkiness of the initial few episodes will be richly rewarded by some beautiful set pieces that drive home the Wachowskis' vision of shared humanity, plenty of complicated martial arts and often wonderful one-on-one interactions between the eight cluster members.

ONCE THE clustermates gain control of their gift for connection, the show has a lot of fun with sharing the experience of everything from menstruation to hot-wiring cars. In a particularly brilliant exchange between two clustermates set in the Diego Rivera museum in Mexico City, two characters discuss falling in love, defining yourself and integrity to yourself and the people around you.

It is both a masterful piece of filmmaking that combines multiple locations and flashbacks, and is a pivotal moment in expressing the key themes of the show, as voiced by two people outside for whom defining identity has been no easy task.

Maybe not surprisingly, the character who takes the lead in understanding what is happening and guides other characters is Nomi, a trans lesbian, who has already made this journey long before having her psychic connection switched on.

The show very smartly mines the real oppression of queer and trans folks at the hands of mental health and medical institutions, and how family members collude to deny trans folks' authentic identity. Nomi may be marginalized in society, but her agency as a sensate drives the plot at many turning points.

The series also delivers on the kind of action sequences that made The Matrix so thrilling. But the creators don't rely on heavy technical support like "bullet-time" gun fights for impact, instead relying on precision editing and gorgeous photography direction. The two violence experts in the group fight primarily with their fists (although guns, machetes and random objects also come into play), and they get ample opportunity to use them.

And like The Matrix, there is a quasi-radical ideal of a few who are able to fully grasp their humanity, among a sea of people just going through the motions (non-psychic humans in this case). Regular humans are described as being profoundly isolated from each other and nature, which makes them the most violent species in history. (The obvious contradiction that the eight's survival is often preserved through some extremely brutal violence isn't explored in season one, and will be foolish to leave unexamined, despite being fun to watch).

Despite this "fact" about humanity, there is a broad cast of secondary characters: best friends, romantic partners and family members with whom the eight have deep and complicated relationships.

And (SPOILER ALERT), one of the great pleasures of the show is not watching them suffer and die just to raise the stakes for the advancement of the plot. They don't live uncomplicated lives and aren't completely unharmed by the series end, but that fits with the violence and chaos of the world around them. And in another lovely divergence from so many TV dramas, some characters actually have good relationships with their parents.

Plenty of series load up (especially early) episodes with sex purely to hook viewers. And often the sexual tension derives from ill-fated relationships or terrible decisions. Or worse, sex is part of revenge or power games between characters (I'm looking at you, Game of Thrones and Orange is the New Black).

The vast majority of sexual activity in Sense8 is same-sex, and clearly the people having it deeply care for each other and are even having fun. In a now semi-infamous scene in Episode 6 ("Episode Sex" according to Silvestre), a sizeable chunk of the cast get it on and it's a scene full of joy, exploration and even smiling. (There's a brief but delightful call back to this in the final episode that answers the question "Isn't anyone ever going to mention this?")

Sense8 loves its characters, and Season 1 ended with a lot left for them to resolve. The creators have mapped out a five-year story line, and knowing the Wachowskis, saving the world can't be too far down the road. It is a little hard to imagine episodes that pack the punch of some of Season 1, especially Episode 10's montage, which has no parallel in depicting one of life's simplest yet most profound events. Hopefully they can maintain the sense of exploration and challenge the first season delivered, without falling into any of the ruts of less adventurous shows.