The anarcho-madness of the free market

The twisted logic of capitalism makes us slaves to a system that treats people as things, writes Australian socialist Ben Hillier, in an article published at Red Flag.

THOSE WHO run the world seem to suffer from cognitive dissonance.

On one hand, they say that without social law and order, rules, discipline and constraint, there can only be chaos and catastrophe. On the other, they tell us that the most volatile and chaotic economic system in human history is the best of all possible worlds.

The latest illustration of the bankruptcy of this economic model came in mid-August, when more than $5 trillion was wiped from global stock markets in just two weeks. How to conceptualize this staggering amount?

In terms of things that would be useful for humanity, $5 trillion would enable you to build a state-of-the-art 800-bed hospital (like the new Royal Adelaide or Perth's Fiona Stanley) every year for the next 2,500 years. Or going backwards, every year until 430 B.C.--the year that Athens in Greece was hit by a devastating typhus plague during the Peloponnesian War. Pericles survived and with him democracy, but one-third of the citizens perished. A hospital would have been handy. 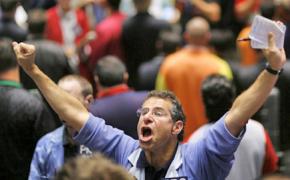 If you wanted to stay in the present and spend it all at once, at the current exchange rate, you could buy every residential property in Australia--every apartment and every house in every state and territory. And you would have enough left over to build 750 of those hospitals--three or four for every country in the world.

That's how much disappeared, at least nominally, over those two August weeks. There are few better examples of the anarcho-madness of the capitalist system than such stock market crashes.

A STOCK is a claim to ownership of part of a company's assets and profits. The still-dominant theory of the world is that markets are efficient--that the prices of stocks and other (ironically termed) "securities" reflect all relevant information. According to this theory, bubbles and crashes are logically impossible because the securities are always a true representation of the value of things.

The real world doesn't work like this. And those who rule are sometimes forced to admit it. In October 2008, for example, as the North Atlantic financial system was collapsing, the former chair of the U.S. Federal Reserve Bank, Alan Greenspan, told Congress: "I've found a flaw. I don't know how significant or permanent it is, but I've been very distressed by that fact...A flaw in the [economic] model that I perceived is the critical functioning structure that defines how the world works."

Little has changed since that time. Greenspan and his colleagues didn't become anti-capitalist activists. Why? Because they and their friends continued to make money out of the whole disaster. Those at the top care only about that one detail, money, not whether the system is efficient, rational or fair. And making money is what markets are all about.

Stock exchanges across the world settle tens of millions of transactions per day. In U.S. markets alone, more than 10 billion shares are traded daily. The transactions are based on simple expectations: that the purchaser can buy low, sell high and thereby make a profit--which is little more than a claim on the labor that other people have performed or are expected to perform in the future.

Much of the value, then, is not real--it's just an expectation, a hope or an IOU. The devastation from market collapses certainly is real--the ruin of livelihoods and lives. But much of it is based on the bidding up and selling down of claims to ownership over things the owners will never touch or see, let alone labor to produce.

Some of the most complex and advanced systems built by human beings are those engineered to facilitate this vast swapping of claims. What an utter waste of resources and ingenuity: the best minds of our generation wasted by market madness.

It goes further. Everything down to the most intimate aspects of human existence is subject to market logic--scrutinized over whether it can contribute to the accumulation of money. If not, there is always a service or product available to improve it. Our smiles, our skin tone, our body shapes, our insecurities--everything can be "improved" to make it marketable or exploited to some commercial end.

The historian and philosopher Philip Mirowski writes of human beings reduced "to an arbitrary bundle of 'investments,' skill sets, temporary alliances (family, sex, race), and fungible body parts." We may still feel ourselves human, but to the system, we are nothing but an input--the debased subject called human capital, which will sell on the labor market only if it, too, can be a source of profit for the capitalist buyer.

The market and competition have become so deeply embedded in social life, so seemingly natural, that it is difficult to disentangle humanity from commodities, human nature from corporate logic. In part, that's why people can be so callous and God-awful toward one another, even when they are not trying to make money--the calculus of seeing others only as things is pervasive because that's how everyone is treated by the system.

This is also why it is so hard to imagine an alternative to capitalism.

Yet there is an alternative: socialism. It might be difficult to conceive. But all we are really talking about is taking the world's existing wealth and ingenuity and putting them to work for everyone rather than a tiny few, making the economy address human needs rather than create profits, and ending the mayhem of the capitalist cycle.