We stand for the politics of solidarity

The Portland, Maine, branch of the International Socialist Organization responds to a controversy surrounding an International Women's Day public forum held at the University of Southern Maine.

ON MARCH 8, in honor of International Working Women's Day and in solidarity with the International Women's Strike, the Maine branch of the International Socialist Organization hosted a panel discussion titled "Women's Strikes and Women's Liberation." The panel included a politically, racially and gender diverse group of speakers from the ISO, as well as other campus and community organizations who presented on a variety of topics related to women's liberation. These topics included the International Women's Strike USA platform, building trans-inclusive feminism, the dynamic between liberal and radical approaches to the women's suffrage movement, the women's textile workers strike that sparked the Russian Revolution in 1917, and a case for building an anti-racist and anti-imperialist feminism rooted in the politics of solidarity.

The International Women's Day discussion was a small effort the Portland ISO was proud to help organize as part of a growing resistance in the U.S. and around the world. This will to resist has been rising for some time, but we have seen it sharpen and escalate in the months since Donald Trump's election. We saw it in the wave of protests erupting in cities across the country the night after Trump's election; in the outpouring of support for the struggle at Standing Rock; on January 21, when a call for a women's march resulted in the largest day of protest in United States history; in the airport occupations, the taxi drivers' and Yemeni bodega strikes against the Muslim ban; in the fight to defend Planned Parenthood and abortion rights. 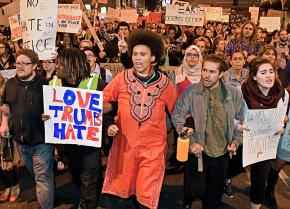 We would rather spend our time building solidarity with all these actions. However, since March 8, individuals have taken to online platforms to characterize the International Women's Day event, the ISO at large and individual members as violent, transphobic, and white supremacist. Additionally, these individuals have stated that the facilitation process of "taking stack," the speakers and their presentations erased, silenced and perpetuated violence against women of color and other marginalized voices in the room.

We entirely reject these allegations as well as the ongoing smear campaign by our critics, none of whom attended the event in its entirety, and some of whom did not attend at all. Given the seriousness of the allegations against us, as well as the stakes for building a political moment capable of challenging the Trump administration and a vicious far right emboldened by it, we have decided to we have no choice but to respond directly.

It seems to us that our critics had made up their minds before they walked into the room. After arriving late--missing welcoming remarks by the chairperson, greetings on behalf of café workers who had shut down for the day, the entire first presentation, and the first half of the second presentation--a member of the group in question raised her hand to begin the discussion by reproaching the panel for not speaking about Standing Rock. As it happened, the panel's first speaker had made Standing Rock a central component of her presentation. She quoted at length from a Native organizer (who the Portland ISO branch had hosted via Skype at a public meeting on December 16, 2016) about an assembly she took part in while at Standing Rock calling for resistance against the escalation of sexual violence against Native women in the wake of the implementation of profit-driven colonialist projects like DAPL. Even after the panelist repeated this part of her presentation in order to dispel the accusation, our critics denounced the speaker for having mentioned Standing Rock in the first place because the panelist is a Black woman and is not herself Indigenous. Later in the evening, one of our critics accused the ISO of erasing women of color and claimed that the multiracial panel "failed to uplift marginalized voices and instead uplifted whiteness."

Second, we strongly object to our critics' violation of basic social movement security norms. During the discussion section of the meeting, they filmed and/or photographed participants without their consent or knowledge. Further, some of our critics took to social media to publish a list of ISO members publicly without their consent. Our critics' intentions may have been to "merely" to initiate a campaign of public "shaming"--truth be told, this doesn't bother us as we have nothing to be ashamed about. However, their actions betray a reckless disregard for activists' safety in the face of an increasingly aggressive state that aims to repress our movements by denying basic democratic rights, especially those who are particularly vulnerable because of legal circumstances, nature of employment, citizenship status, etc. If nothing else, we hope they will reconsider and take immediate steps to correct these irresponsible actions.

Third, one critic contends the International Women's Day panel employed a "white supremacist" structure because our chairperson used "stack" to organize the discussion portion of the meeting. We affirm our commitment to democratic meeting structures and facilitation process, including stack, which was developed within movements for the express purpose of amplifying marginalized voices. Stack is an alternative to a q-and-a style of facilitation, which often relegates attendees to passive participants. Stack facilitation aims to empower attendees to build upon or challenge the ideas under discussion or to share their own knowledge and experience. We use time limits on speakers in order to allow as many people the chance to speak as possible, to prevent one person/topic from monopolizing limited discussion time, and to enable speakers from the floor to present ideas in a concise and accessible manner. We don't insist that everyone operates exactly as we do, and at times we change up our formats, but it should go without saying that none of this has anything to do with white supremacy.

Finally, we specifically challenge the implication that violence of any kind, either explicit or implicit, was threatened against anyone attending the meeting. These claims simply have no basis in reality. Where does such an absurd charge come from? The facts are very simple. Our critics repeatedly interrupted speakers throughout the discussion and during one such interruption, after the individuals speaking out of turn refused the chair's offer to add them to the speaking list, the chair asked them and the speaker with whom they were arguing to take their conversation outside. The ISO member who had the floor offered to go outside with them to continue the discussion informally with those heckling him so that others in the meeting might have a turn to speak up. The hecklers declined to leave and, incredibly, have twisted this exchange into the bizarre idea that they were being challenged to a street fight.

There are other accusations and insults being thrown around as well, but we feel the few refutations listed above are sufficient to point to baselessness of the whole campaign. We stand ready and willing to work with any and all who want to fight for a better world, but we will not be silent in the face of slander.

ORGANIZERS ON the left are faced with the task of cohering the huge energy for resistance into a sustained, confident mass movement of millions of people. The scope of this challenge forces us to confront the question of how to unify a broad, multi-tendency movement. We are up against powerful and dangerous enemies. Donald Trump has issued 34 executive orders in the last two months, including his first and second Muslim ban, a call to restrict funding for sanctuary cities, funding to build the border wall, approval of the Keystone XL and Dakota Access Pipeline, promotion of the voucher program, a call to revise the Clean Water Rule, and directives to ICE to terrorize immigrant communities through a program of mass deportations.

The seriousness of this project means we have an obligation to take a stand against the politics and practices that undermine its goals. Building a unified left does not mean burying political disagreements that will inevitably arise among organizations in the struggle. It does mean building a political culture and democratic practices that create room for sharp but comradely debate. The foundations of this force cannot be built on shame and manipulation. We must develop a political culture capable of taking on oppression within organizing circles without tearing them apart.

We stand for the politics of solidarity. We assert that an injury to one is an injury to all, that working class people have a shared interest in fighting all forms of oppression, whether or not they experience that particular oppression directly. We argue that capitalist exploitation--and the state that has always protected the 1 percent against the 99 percent--has played a pivotal role in the creation and continuation of systemic racism, sexism, homophobia, transphobia, ableism and other forms of oppression, and therefore must be dismantled.

We acknowledge that many organizations do not share this perspective or aim, but we seek to work in collaboration with all groups and individuals interested in building united fronts in the struggle for against the rising far right and for reforms that improve the material conditions of oppressed and exploited people's lives. We also remain committed to fighting beyond reforms, for a world free from oppression and exploitation. We will continue to assert ourselves in struggle as an independent organization fighting for a revolutionary conclusion: a socialist society achieved by a self-emancipated working class.