The nuclear threat that Trumps them all

The chief source of escalating tensions lies in a nuclear arsenal many times bigger than the one the North Korean regime has developed, write Steve Leigh and Alan Maass.

THE UNTHINKABLE possibility of nuclear war is once again in the headlines after U.S. officials reacted with shrill threats to the North Korean government claim to have tested its most powerful nuclear bomb yet.

This is the latest escalation in a game of nuclear chicken, with calculated provocations on all sides--though to judge from the mainstream media, it is only North Korea's Kim Jung-un who is driving the world to the brink of a nightmare.

This is false. The North Korean test of what it says was a more destructive hydrogen bomb, along with more launches of missiles supposedly capable of carrying a nuclear warhead, came within days of the annual large-scale military exercises carried out by South Korea, Japan and the U.S.

These "war games" are an aggressive threat directed explicitly at North Korea--but U.S. political leaders and media commentators present them as if they are purely defensive, while heaping scorn on anyone who suggests otherwise.

North Korea's latest nuclear detonation, the first since Trump was inaugurated, is a frightening development. Media outlets reported that this bomb was estimated to be as much 10 times more powerful than previous blasts, and the regime claimed the bomb could be loaded onto an intercontinental ballistic missile. 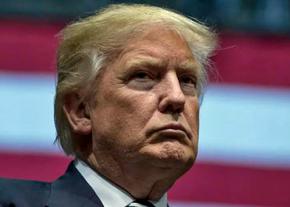 Yet in all the talk of kilotons and missile ranges, the media left out one important statistic: The nuclear arsenal at the command of the warlord-in-chief in Washington, D.C., is 700 times bigger than North Korea's.

ONE NUCLEAR warhead anywhere in the world--and controlled by unaccountable leaders, as is true of every government that possesses them--is one too many.

But the undeniable fact is that North Korea is a bit player among the nuclear powers.

According to the Arms Control Association, as of July 2017, North Korea possessed an estimated 10 nuclear warheads. Israel was estimated to have eight times as many warheads in an arsenal it has never publicly acknowledged--but you won't hear Donald Trump complaining about the reactionary fanatic, bent on the ethnic cleansing of the original inhabitants of Palestine, in charge of those weapons.

Regional rivals India and Pakistan are thought to each possess well over 100 nukes. That's the same India that Donald Trump, in his speech announcing the escalation of the U.S. war on Afghanistan, invited to join in Washington's colonial war, "a sure-fire way to bring nuclear-armed India and Pakistan [which borders Afghanistan] into a terrifying confrontation," wrote columnist and author Eric Margolis.

The United Kingdom, China and France have between 200 and 300 warheads each, but their stockpiles are dwarfed by the two countries that possess over 90 percent of the world's weapons of total destruction: the U.S. and Russia, the Cold War rivals that brandished those weapons at each other for decades. Their arsenals are smaller in number now, but Russia still has 7,000 warheads, and the U.S. has 6,800.

U.S. leaders of both mainstream parties claim their threats toward North Korea are out of concern for regional and international security, but the U.S. government's history as a nuclear power belies those claims.

Only the U.S. has killed people with nuclear weapons in wartime when it obliterated the Japanese cities of Hiroshima and Nagasaki in 1945. The U.S. government, under the command of Democrat and liberal hero John F. Kennedy, brought the world to the closest it has ever come to global nuclear war with the 1962 Cuban missile crisis. On numerous occasions, false radar readings led to near-nuclear launches.

Currently, the U.S. has about 1,400 active strategic weapons deployed in missile silos or on aircraft and submarines--remember that the saber-rattling rhetoric about North Korea is in response to the regime's attempt to build one working missile.

The submarine-launched missiles are probably the most dangerous--there are 920 of them on 230 vessels, with every single one "having destructive power equivalent to many Hiroshimas...[and] sufficient to destroy an entire country and bring on nuclear winter," writes peace activist Mel Gurtov.

Today's missiles carry more than one warhead. These have been given the benign-sounding name of MIRV, or Multiple Independently targetable Re-entry Vehicles. The multiple warheads give each missile vastly greater destructive power and makes missile defense nearly impossible.

SOME COMMENTATORS believe the world is a safer place than during the Cold War because there are fewer nuclear warheads overall, and fewer still are active. As a result of arms control treaties, the number of quickly useable nukes has declined.

The negotiations "succeeded" because both the U.S. and Russia realized they could maintain their power to destroy each other--yet neither government has ever been serious about eliminating all nukes, which constitute one of the most important foundations of their respective military might.

And, needless to say, the streamlined arsenals are still extremely dangerous. They are more than enough to annihilate the planet. As Hans Kristensen and Robert S. Norris wrote in an article for the Federation of American Scientists:

The number of nuclear weapons in the world has declined significantly since the Cold War: down from a peak of approximately 70,300 in 1986 to an estimated 14,900 in early-2017.

Government officials often portray that accomplishment as a result of current arms control agreements, but the overwhelming portion of the reduction happened in the 1990s. Moreover, comparing today's inventory with that of the 1950s is like comparing apples and oranges; today's forces are vastly more capable. The pace of reduction has slowed significantly. Instead of planning for nuclear disarmament, the nuclear-armed states appear to plan to retain large arsenals for the indefinite future.

As this report and every serious analysis of the issue makes clear, the greatest danger comes from the two major nuclear powers, not the minor ones.

And what's worse, the nuclear arms race continues. While the numbers of warheads have not been rising, each side is trying to increase their "quality."

The administration of Barack Obama led the way in developing a nuclear modernization program. The guiding principle is that if a streamlined nuclear arsenal is going to remain a credible deterrent, the weapons have be known to be fully functional--which requires testing, updating and replacement.

One inevitable result is that the "modernized" nukes become more usable. A Guardian report in 2015 pointed out that the upgrade of B61-12 nuclear weapons--at a cost of $8 billion--included making the yield adjustable before launch and exchanging the rigid tail fin for a movable one to make it easier to guide the bombs to their targets.

Aside from the threat of making nuclear weapons more effective and therefore more likely to be used, there is the price tag. The Obama-era nuclear modernization program inherited by Trump could unleash what Bill Clinton's Defense Secretary William Perry called "a new nuclear arms race"--one that "will be at least as expensive as the arms race we had during the Cold War," Perry said.

IN THE age of Trump, it is tempting to see the problem as one egomaniac in the White House. Trump is, of course, frightening in any number of ways, including the fact that he feels no compunction about threatening to unleash "fire, fury and, frankly, power, the likes of which this world has never seen before."

But the roots of the nuclear arms race and the threat of total destruction go far beyond one reactionary fanatic--with Obama's "modernization" program being another case in point. As Mel Gurtov wrote:

There simply is no legitimate basis for believing that the nuclear arsenal needs to be larger, more invulnerable, or more accurate and reliable.

Yet as Americans learned long ago, for the nuclear lobby--the pro-nuclear members of Congress, the military industries that test and produce the weapons and the means of their delivery, and the various Pentagon advisory boards, laboratories, and nuclear planners--enough is never enough.

These folks can always be counted on to argue that the nuclear stockpile must be periodically revitalized to ensure readiness. And all it takes is a supposed nuclear threat--today meaning North Korea--to bolster the nuclear lobby's case for upgrading.

Trump, Defense Secretary James "Mad Dog" Mattis and Ambassador to the UN Nikki Haley rail about the threat of North Korea developing a nuclear weapon--while they control enough to destroy the planet, and they engage in "war games" to prove they'll use them.

The first step in opposing the rising threat of war over Korea is to expose the hypocrisy of the warlords of Washington.