The humanitarian disaster in Puerto Rico after Hurricane Maria is continuing with no end in sight--because of the failures of the federal government, writes Monique Dols.

IN ANOTHER of his now infamous early-morning Twitter rants, Donald Trump complained last week that his administration "cannot keep FEMA, the Military & the First Responders, who have been amazing (under the most difficult circumstances) in [Puerto Rico] Forever!"

This cruel threat to withdraw an already inadequate federal relief operation out of Puerto Rico comes as 85 percent of the population is still without electricity and 31 percent are without running water, according to the likely optimistic estimates of the governor's office as this article was being written.

A Federal Emergency Management Agency (FEMA) official admitted to the Guardian last week that there is a daily shortfall of between 1.8 million and 5.8 million meals to meet the needs of 2 million Puerto Ricans in danger of going hungry.

Hours after Trump's Twitter tantrum, FEMA spokesperson Aileen Lainez tried to clean up her boss's mess with her own tweet promising that FEMA "will be w/Puerto Rico, USVI, every state, territory impacted by a disaster every day, supporting throughout their response & recovery." 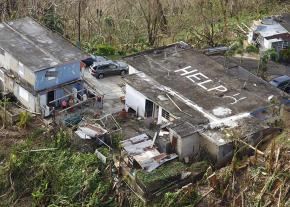 But the fact of the matter is that the gap between what needs to be done and what is being done is already dangerously wide--and could get much worse before it gets better.

WHILE THE official death count reported by Puerto Rican officials was at 48 as of last weekend, that is grossly understated. Vox.com did an audit of reports from Puerto Rico last week and estimated some 450 to 500 people had already died as a direct or indirect result of Hurricane Maria.

And with communication and transportation on the island still uneven, some are convinced the number is higher still. The director of one of the island's largest funeral home chains, Funeraria Ehret, told Vice News, "We've been told people have buried their family members because they're in places that have yet to be reached."

What we know for certain is that more people will die in the weeks to come--brutal and needless deaths because of the abject failure of the federal government's disaster relief operation in Puerto Rico.

The hospital system in Puerto Rico is in a state of crisis. Gov. Ricardo Roselló's website on the status of the recovery effort reports that all 68 of Puerto Rico's hospitals are open.

This claim is disputed by others on the island, but setting that aside, the vast majority of hospitals that are open are running off the electrical grid, using generators, despite limited access to diesel and gas.

Lack of electricity is by no means the only problem facing hospitals in Puerto Rico, but it certainly remains high on this list. And while corporations ranging from Google to Tesla have been angling to rebuild the island's electrical and telecommunications infrastructure, very little has been done in the short term about the electricity problem.

Even at the Centro Medico de Rio Piedras in San Juan--the main hospital on the island, and a leading trauma center not only for Puerto Rico, but the entire Caribbean--conditions are dire due to lack of electricity or even a reliable source of diesel for the generators.

Dr. Iván González Cancel, a surgeon at the trauma center, told the Washington Post that FEMA had visited Centro Medico about 30 hours after the storm to assess the hospital's needs--but had yet to return as of the end of September.

There has been no explanation for this lack of follow-up about the island's main hospital, even though assessing and meeting the needs of critical facilities is supposed to be FEMA's primary role. Brock Long, a FEMA official in Puerto Rico, claimed in an interview with Fox News that "FEMA is largely only responsible for the emergency power push, to making sure that hospitals and critical facilities are back online."

In addition to the lack of reliable power, supplies are low, and medical personnel are stretched to the limit. As a consequence, the New York Times reported:

Nearly three weeks after Hurricane Maria tore through Puerto Rico, many sick people across the island remain in mortal peril. The government's announcements each morning about the recovery effort are often upbeat, but beyond them are hidden emergencies.

UNLESS THERE is an immediate change of course, primarily on the part of FEMA and other federal authorities, the health crisis in Puerto Rico will grow worse. With about a third of the island's population without running water, plus a complete breakdown of the waterlogged garbage collection and debris removal systems, the island is on the brink of a public health emergency.

Puerto Ricans desperate for water have turned to drinking and bathing from natural springs, rivers and streams. But in some cases, these sources of water are contaminated. There are already several confirmed cases of people dying from leptospirosis, a bacteria that can infect water from animal urine.

Maureen Upton, a nurse practitioner who went on a union-sponsored delegation to Puerto Rico, described how the hurricane's "storm surge washed farm manure into towns, which completely ruined spring water. I was in the Peace Corps [30 years ago], and it reminds me of a developing country. I think it's going to be several years for recovery. It's not getting better."

Meanwhile, bottled drinking water is increasingly difficult to come by, even in major cities such as San Juan, since bottling companies are only partially back online--again with lack of power one of the primarily problems.

In response, local authorities have started distributing iodine tablets and engaging in a public education campaign about not drinking contaminated water.

But the scale of the desperation is clear from reports that people in Dorado are trying to obtain drinking water from wells at a site classified by the Feds for "Superfund" cleanup because of the toxic waste and pollution found there.

Showing the ignorance typical of the Trump administration, the Environmental Protection Agency (EPA) released a statement lecturing about the "residents obtaining, or trying to obtain, drinking water from wells at hazardous waste 'Superfund' sites in Puerto Rico. EPA advises against tampering with sealed and locked wells or drinking from these wells, as it may be dangerous to people's health."

This kind of finger wagging from authorities who blame ordinary people for drinking contaminated water is bad enough considering how badly the federal government mishandled the disaster.

But to top it off, CNN reported that the decision to use well water from the Superfund site came from on high. It broadcast video footage of officials from the Puerto Rican water utility, Autoridad de Acueductos y Alcantarillados, or AAA, filling large water tank trucks at the Dorado Groundwater Contamination Site to distribute to the city and surrounding areas.

THEN THERE is the problem of supplies piling up at Puerto Rico's seaports and airports.

The media have largely explained this problem as matter of impassable roads and the unavailability of truck drivers--so the aid sits around undistributed. But the case of the town of Aibonito shows this isn't the full story, at least any more.

On October 6, Rachel Maddow reported that MSNBC's producers could pass the road into Aibonito easily, more than two weeks after Maria hit the island. FEMA had been to Aibonito three times in the previous two weeks, MSNBC reported--not to bring desperately needed supplies, but to help residents fill out paperwork to apply for federal aid.

Asked what went wrong, FEMA essentially replied: It's not our job. "Relief supplies are being delivered to regional staging areas, and mayors are largely responsible for arranging pickup and distribution," the agency told MSNBC.

In response, Maddow asked the questions that millions of Puerto Ricans have been asking for weeks: "How are mayors of towns like Aibonito supposed to do this on their own without vehicles or working phones or fuel?"

FEMA officials don't even claim that they're keeping up with the need for food on the island. A Guardian article last week quoted federal officials admitting that they could only provide 200,000 meals a day to meet the needs of 2 million people.

Yet FEMA is threatening to cut off one of its only contractors who provides cooked meals, as opposed to the federal government's usual Meals Ready to Eat, or MREs.

World Central Kitchen, founded by the famous Spanish chef José Andrés, cooks 90,000 meals and distributes them Puerto Rico through a network of restaurants and kitchens. FEMA insists that federal rules prevent it from renewing the contract in less than a couple weeks.

"There is no urgency in the government response to this humanitarian crisis," Andrés said. "They have all the officials and armed guards at headquarters, but they have no information about the island. They don't even have a map they can share about who needs food.

With FEMA under increasing scrutiny for the criminal neglect of Puerto Rico, administration officials are scrambling for answers. Data about FEMA's efforts in Puerto Rico mysteriously disappeared from the agency's website earlier this month and then reappeared after an outcry.

But no amount of hiding the numbers can mask the fact that ordinary Puerto Ricans have been abandoned by the federal government to fend for themselves in a terrible crisis.

Trump had the gall to tweet last week: "Nobody could have done what I've done for #PuertoRico with so little appreciation. So much work!"

But action--or rather, inaction--speaks louder than tweets. The federal government is guilty of criminal neglect toward the people of Puerto Rico. That was the case before the storm, but it's all the more so now. Everyone who cares about justice should raise their voices against an atrocity in the making.