Katherine King and Paul Eselgroth report on a bill in Ohio that would require teachers to out gender non-conforming youth to their parents and restrict education about identity.

A BILL that will be taken up by the Ohio legislature this fall would require teachers and school counselors to out transgender students to their parents, or risk felony charges.

Ohio’s HB 658, which applies to all school personnel as well as public children services agency employees, would also outlaw the distribution of “educational materials” about gender identity without express parental consent. The bill also stipulates that parental refusal to permit treatment for gender dysphoria cannot be used as grounds for removal of custody.

Particularly controversial is the bill’s mandate that school and agency employees “immediately notify” the parents of any child who has “exhibited symptoms of gender dysphoria or otherwise demonstrates a desire to be treated in a manner opposite of the child’s biological sex.”

Not only students who are openly trans, but any student whose expression of gender doesn’t fit narrow societal expectations could be at risk. 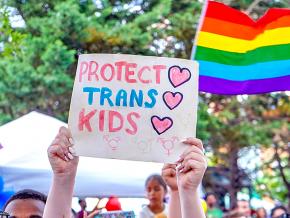 A public statement from Equality Ohio, an LGBTQ advocacy organization, questioned the implications of the bill:

Who is the judge of which gender is allowed to do what? If Jane signs up for shop class, will her parents receive a government letter? If Jordan doesn’t want to play football, do his parents get a letter? What if Alex wants to attend a meeting of the student LGBTQ group––does the school e-mail that to Alex’s parents? Just what stereotypes are they expected to enforce?

REPUBLICAN STATE Reps. Tom Brinkman and Paul Zeltwanger introduced House Bill 658 in May in response to a Cincinnati case in which a judge awarded custody of a transgender teen to his grandparents, due to his parents’ refusal to allow him to undergo hormone therapy. The teen had reported feeling unsafe in his home and being forced to sit and listen to Bible passages for hours at a time.

Judge Sylvia Hendon’s decision was based largely on testimony from doctors at Cincinnati Children’s Medical Hospital, who advised that hormone therapy begin as soon as possible to lower the teen’s suicide risk.

Brinkman and Zeltwanger claim that the bill’s goal is to protect the rights of parents. In an interview with the Cincinnati Enquirer, Brinkman stated, “Parents have rights over their children until age 18, they’re responsible for them. We should not be taking those responsibilities away from parents.”

A variety of groups have voiced opposition to the bill, including LGBTQ advocacy organizations and unions. Their criticisms have focused on potential dangers to transgender students, as well as the limitations the bill imposes on school personnel.

The Ohio Education Association (OEA), which represents 125,000 teachers and school support personnel, also opposes the bill. OEA President Becky Higgins said that the legislation “is contrary to OEA’s belief that all persons, regardless of gender orientation, should be afforded equal opportunity and guaranteed a safe and inclusive environment within the public education system.”

The American Counseling Association (ACA) released a statement saying that the bill violates its code of ethics, “negates client rights to confidentiality and attacks the very basis of a key mandate for counselors: to provide counseling to those who need it and have nowhere else to turn.”

ALL OF its opponents make the case that HB 658 endangers transgender youth by removing social supports and exposing youth to situations of domestic violence.

Transgender youth are already at increased risk of suicide ideation and attempts. A 2016 study by Cincinnati Children’s Hospital found that 30 percent of trans youth reported at least one suicide attempt, and more engaged in self harm.

Studies have shown that social support is one of the key protective factors that prevents trans youth and adults from committing suicide. While having a supportive family is important, the presence of “formal social supports,” like counselors and crisis hotlines, has also been shown to prevent suicide attempts.

Beyond the mental health risks that would be caused by HB 658, trans youth would also be put in potentially dangerous situations at home. A study of over 27,000 trans adults found that 10 percent of trans people who were out to their families experienced violence from a family member, and 8 percent were kicked out of their homes.

The risk of domestic violence from HB 658 may be particularly great because the bill requires non-custodial parents to be informed of a child’s gender presentation. This includes parents whose custody has been removed due to prior instances of neglect or abuse.

ON THE other hand, the proposed bill has been lauded by various conservative groups. Glossing over the transphobic implications, their rhetoric usually focuses on parents being the final arbiters in any and all decisions regarding their child’s upbringing.

This is the tack taken by Citizens for Community Values (CCV), a socially conservative Ohio Christian group. Aaron Baer, the group’s president, said that “you can have whatever views you want on LGBT issues and on all of these things,” but that the bigger issue is the “infringement” on the parental right to make decisions on their child’s behalf.

[A]t the center of this debate is the idea that parents are better equipped to act in the best interest of their children than the state. Policies that allow the state to remove children from their parents because of disagreements with their favored sexual agenda violate this fundamental principle and ultimately put children at greater risk.

While nominally acknowledging that intervention is at times necessary in the event of parental abuse, the FRC disputes the notion that denying one’s child the option to pursue transition or subjecting them to conversion therapy qualifies as abuse.

The general right-wing narrative in these various statements is both consistent and familiar: they take great pains to assert that they don’t have any problem with trans people or their transitioning, but state that it’s ultimately up to the parents to decide if this is the right decision for their child. In other words, parental rights trump all.

Of course, these right-wingers tip their hand when they consistently misgender trans people in their statements, refer to gender affirmation surgery as “mutilation,” and deploy brazen bathroom-panic furor in their arguments.

But even without these telling details and these group’s obvious ulterior motives, the inevitable result of enshrining abstract “parental rights” over the rights of children in our current society is clear: more abuse, more neglect, more trauma and death.

These conservatives know full well the transphobic climate we live in and the abuse trans minors can face at the hands of their families. It’s not a matter of ignorance — the right simply judges these to be acceptable options for parents in raising their children.

Socialists reject this reactionary model of the family, which denies children (and typically also women) their agency, subordinating them to the whims of the head of household.

Right-wing pundits may try to smuggle this in under the wholesome-sounding “family values” euphemism, but it’s obvious how this understanding of “values” endangers trans youth. We need a society that affords youth their agency to affirm their gender, and take whatever steps to transition they determine to be necessary.

It is unclear what will happen to HB 658. Brinkman seems hopeful about its prospects in the state legislature, but how much support it ultimately gets remains to be seen.

While current opposition consists of internet petitions and calls for voters to contact state legislators, there may need to be greater resistance if the bill gains traction. Given the response of the OEA, this could bring education workers together with LGBTQ activists and others to fight for the rights of trans students.