Nation.com sports editor Dave Zirin takes stock of the impact of Rihanna’s expression of solidarity with the star quarterback who remains a symbol of resistance.

JUST A year ago, the NFL hoped that Colin Kaepernick would become a something of a ghost, reminding players that protest, dissent or any kind of free thought would be punished. But of course he hasn’t become a cautionary tale. Instead, he’s morphed into a folk hero for a new generation of activist athletes. Despite remaining unsigned, he’s even now the spokesperson for a ubiquitous shoe company that also happens to be a primary brand for the league.

The NFL’s response has been to step back from punishing players for protesting racial inequity and police violence during the National Anthem and instead hope that all the tumult fades away. This strategy has included assistance from a compliant media choosing to step back from airing the national anthem or covering the handful of players who still protest.

Now the access merchants that cover the NFL are praising the league for its “handling” of the players, and putting this period of protest in the league’s rearview mirror. But the elephant in the room remains: Colin Kaepernick — still training every day, still unsigned as an NFL quarterback, while all kinds of less-qualified floating pieces of football extract are being signed by NFL teams. There is noticeable fatigue even among his supporters, weary of having to continue to point out the various Tom Savages who get signed and released, only to be signed again, while Kaepernick spends his prime on the sidelines. 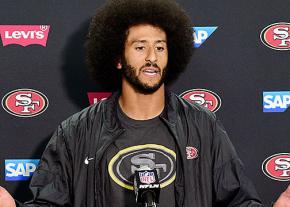 But now the issue of his banishment is back in the news, and it’s coming from a place of solidarity outside the NFL. Megastar Rihanna, with 230 million records sold and a closet full of Grammy awards, has turned down the prime opportunity to perform at the halftime of the Super Bowl. In the words of an insider, “They offered it to her, but she said no because of the kneeling controversy. She doesn’t agree with the NFL’s stance.”

Her decision immediately went viral and put Kaepernick’s name back on the pop-cultural front burner. It is also already having a ripple effect, influencing other celebrities, including comedian Amy Schumer, who posted on Instagram that this year she wouldn’t be taking part in any Super Bowl ads for the same reason. She also wrote at length in a thoughtful post:

Friday thought. I wonder why more white players aren’t kneeling. Once you witness the truly deep inequality and endless racism people of color face in our country, not to mention the police brutality and murders. Why not kneel next to your brothers? Otherwise how are you not complicit? I think it would be cool if @maroon5 backed out of super bowl like @badgalriri did. I personally told my reps I wouldn’t do a Super Bowl commercial this year. I know it must sound like a privilege ass sacrifice but it’s all i got. Hitting the nfl with the advertisers is the only way to really hurt them. I know opposing the nfl is like opposing the nra. Very tough, but don’t you want to be proud of how you’re living? Stand up for your brothers and sisters of color.

This all demonstrates that one of the fundamental issues that still animates the handful of players who continue to kneel during the anthem is that Colin Kaepernick is still unemployed. The NFL and Roger Goodell can speak elliptically all they want about “listening” to players, but as long as Kaepernick is sidelined, the NFL’s cowardice will be on display.