Hillary Clinton's campaign has stirred up issues that won't be so easily put away behind a façade of unity against the Republicans.

IT'S NO longer if, but when: When will Hillary Clinton accept reality and concede that she lost the Democratic presidential nomination?

The real question is how much more damage she'll do on the way out.

The Clinton campaign's crusade to tear down Barack Obama has dragged the political terrain of the 2008 election to the right and sanctioned a stew of bigoted ideas and stereotypes that, though never far from the surface of American politics, were less prominent as the primaries began.

It may not be enough to save the Republican Party, which is in a shambles caused by the disaster of the Bush presidency and the repudiation of the right-wing agenda. But the first party of American capitalism has gotten a helping hand from two opponents.

Hillary and Bill Clinton have set out, more effectively than any right-winger, the most effective ways for the Republicans to attack Obama in the general election campaign--and this has shifted the terms of the discussion in mainstream politics, which will have a wider effect on what people think and talk about in the run-up to November. 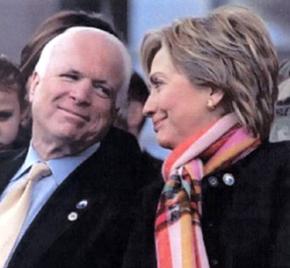 Clinton has lost. If not by tonight, then certainly within the next days, Obama will reach the milestone of a majority of delegates and superdelegates to the Democratic convention--and at that point, Clinton will have to admit defeat, or try to fight on with the Democratic establishment, save only her most devoted supporters, closing ranks against her.

So Clinton will probably drop out. And while the race could end in bitter rivalry, it's more probable that some face-saving arrangement will allow Obama and Clinton to sing each other's praises and talk about putting their differences behind them.

But there will be more to it than the surface appearance. Hillary Clinton and her supporters have stirred up issues that--regardless of how much they affect the outcome in November--won't be so easily put away behind a façade of unity against John McCain and the Republicans.

The Clinton campaign's disguised and not-so-disguised appeals to racism and bitter complaints about Obama have changed the shape of the campaign in ways that need to be understood and explained--in the context of an election that, nevertheless, seems likely to reflect the overarching shift to the left in U.S. society and politics.

WHEN CLINTON declared her candidacy a year and half ago, the game plan was to present her as the "inevitable" nominee--the frontrunner with so much of the party establishment lined up that the results of the primary contests were a foregone conclusion.

That myth collapsed the first time Clinton faced actual voters. Stunned advisers continued to push the claim that she alone among the Democrats had the experience to "lead from day one in the White House." But the argument fell flat. The record turnouts for the Democratic primaries weren't driven by enthusiasm for a candidate with insider credentials--but excitement that eight long years of George Bush were finally coming to an end, and a new president would bring change in Washington.

So the Clinton campaign shifted gears. It adopted John Edwards' populist message--Hillary Clinton, a multi-millionaire with husband Bill and creature of the Washington establishment, was transformed into a fighter for the "little guy."

But the flip side of the strategy was to take down Obama. Bill Clinton got the ball rolling in South Carolina by downplaying the importance of Obama's enthusiastic support among African Americans. Geraldine Ferraro, a former vice presidential candidate for the Democrats and key fundraiser for Clinton, summoned up years of attacks on affirmative action by declaring that Obama would never have gotten as far as he had if he "was a white man...[or] a woman of any color."

This played into the Clinton campaign strategy to win in states like Ohio and Pennsylvania, by claiming that Obama was, at best, an elitist disconnected from working people, and at worst, actively hostile to white workers, who universally rejected him.

The effect was to sanction racist ideas that some voters might have felt less comfortable expressing otherwise. By the time the primaries reached West Virginia, Clinton--even though it was obvious she would lose the nomination--racked up a lopsided win, and the portion of her supporters who openly told exit pollsters that race was an important factor in their decision had climbed to one in four.

A connected line of argument for the Clinton campaign was that Obama was ahead because he had "gamed" the system--that Clinton was winning by any measure that mattered, but Obama was stealing the nomination on a technicality.

Thus, for weeks, the Clinton campaign has been claiming that it is ahead in the popular vote. It isn't--unless you count hundreds of thousands of votes cast for Clinton in Michigan, but zero for Obama, who along with almost all the other candidates took his name off the ballot, and you make no allowances for five caucus states won handily by Obama that didn't report popular vote totals.

Nevertheless, the Clinton team keeps repeating this distortion--and the Obama campaign hasn't pushed back--which could allow a lie to settle in to some people's minds as the truth. If so, it will only reinforce the parallel argument made by Ferraro that Obama is winning because he had an "unfair advantage"--and was helped by a mysterious "they" who, for some reason, wanted to drive the most qualified candidate out of the Democratic race.

The vitriolic Clinton attack was on full display at a meeting of Democratic Party officials last weekend to decide the status of delegates from Michigan and Florida, where primaries were held early in defiance of a schedule agreed on by national party leaders--Obama and Clinton supporters alike.

Clinton won both votes handily, but everyone accepted the states would suffer some kind of penalty at the Democratic convention in Denver.

Once it became evident that they were behind in the overall vote, however, the Clinton campaign changed its tune. Unless both delegations were seated in full, Clinton and her supporters insisted, the Democratic Party would be committing an injustice comparable to Jim Crow violence in the pre-civil rights movement South or the recent rigged elections in Robert Mugabe's Zimbabwe.

Last weekend's heated meeting of the Democrats' Rules and Bylaws Committee--which was picketed by Clinton supporters--came up with a compromise that essentially accepted the results of the Florida vote, with a big majority of delegates for Clinton, and awarded Obama a minority of delegates in Michigan, on the grounds that he might have won a few if he hadn't taken his name off the ballot.

The Clinton campaign's response? "Delegates hijacked," declared advisor Harold Ickes. "Lipstick on a pig," shouted someone in the audience. According to press reports, Clinton supporters greeted the final vote with a chant of "McCain in 08! McCain in 08! No-bama! No-bama!"

EARLY ON in the primaries, polls showed a high level of support among Democrats for both Obama and Clinton. Overwhelmingly, supporters of both candidates said they would support the other if their favorite lost the nomination.

Of course, that will change by November. Once the nomination is settled, in whatever form, and Democrats set their sights on McCain and the Republicans, the tide will turn back.

Generally, this election is the Democrats' to lose. Eight years of Bush in the White House has discredited the Republicans and the right wing agenda. In Congress, more than 30 Republican incumbents have announced plans to retire, setting the stage for the Democrats to do even better in 2008 than the 2006 congressional election that swept the Republicans out of the majority in both the Senate and House.

And for all the rancor between Clinton and Obama, the primaries have reflected the Democrats' advantage, in part because of the hard-fought campaign. Virtually every Democratic contest broke previous records for voter turnout, and both campaigns--Obama especially, but also Clinton--energized unprecedented numbers of people to get involved in working for the candidates.

These overarching factors have to be kept in mind. But the Democratic primary race has already had an impact on Election 2008 and will continue to do so after the nominee is decided--which could well make the final outcome closer than it would have been otherwise.

The Clinton campaign has provided an invaluable service to McCain and the Republicans by opening up lines of attack against Obama that the right wing, in its ramshackle and discredited state, couldn't have managed to the same effect on its own.

This explains the gap between two different poll results--the Democrats are cleaning up when people are asked which of the two parties they support, yet McCain is even with or ahead of Obama in a head-to-head match-up for the presidency.

Then there's the actual reality (as opposed to the Clinton spin) of lack of democracy in the U.S. political system--the Electoral College, a relic of an 18th century America dominated by slaveowners, which magnifies the importance of the least populated and historically most conservative states in selecting the president.

What happens next can't be predicted, of course. But as the campaign unfolds, keep in mind this question: What does Obama's response to Clinton's attacks--and the coming Republican one--say about the kind of presidency he would preside over if he wins in November?

Obama rarely challenged the Clinton spin machine, even its most absurd claims. He ultimately disowned Rev. Jeremiah Wright and his own former church, rather than make a forthright case about the persistence of racism and the need to challenge it.

Obama could have dispatched Clinton much sooner by exposing her phony populism and proposing more definitive measures to help working people deal with the economic crisis. Instead, when Clinton, for example, joined McCain in supporting a gas tax holiday for the summer, Obama complained that this would increase the deficit.

This is the reality of Barack Obama. As appealing as his rhetoric and message of change is to millions of people, it isn't backed up by substance--proposals that would really change the U.S. political system and benefit working people.