Defying the fear-mongers in Rhode Island

Brian Chidester reports on an ICE raid in Rhode Island carried out with the collaboration of state officials.

PROVIDENCE, R.I.—More than 150 people turned out within hours to protest an immigration raid in Rhode Island July 15, in which 31 immigrant workers from Guatemala, Mexico, Honduras and Brazil were arrested and now face deportation.

Immigration and Customs Enforcement (ICE) agents working with state police carried out the raid at six state court buildings around Rhode Island at 5 p.m., just as the second shift was arriving.

The workers were employed by Tri-State Enterprises and Falcon Maintenance, both janitorial services subcontractors with 45 state contracts between them. Tri-State is owned by the brother of a Democratic state senator and has received contracts when it was not the lowest bidder.

The arrests at the six locations were carried out simultaneously, and with the clear prior knowledge of state officials and agencies.

ICE officials claimed that some of the workers were suspected of "identity theft and document fraud," a ploy used in other raids to threaten immigrant workers with criminal charges in the U.S. before deporting them. This de facto criminalization of immigrants has provided the basis for denying immigrant workers any rights at all. 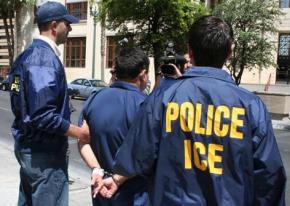 According to the Providence en Español newspaper, one of the workers was arrested when he refused to talk to ICE officials without his lawyer present.

This raid took place in a context of fear and scapegoating since Republican Gov. Donald Carcieri signed an executive order in March that requires all businesses with state contracts to use the federal E-Verify system to check their workers' documentation and deputizes the state police as immigration agents. State police now participate in an ICE program in which they are schooled in immigration law and racial profiling "issues" (i.e., how to racially profile people), as well as using a federal database to determine immigration status.

Despite the fact that only 4 percent of Rhode Islanders think immigration is a serious issue, Carcieri and a handful of Democrats in the General Assembly have been pushing anti-immigrant legislation this spring. This fear-mongering is likely meant to divert attention from the deteriorating economy in Rhode Island--the only state in New England already officially in recession, with an official unemployment rate of 7.5 percent.

Donations and messages of solidarity for the detained immigrant workers and their families can be sent to: St. Teresa's Church, attn: Ruth Salvatierra, 275 Manton Ave., Providence, RI 02909. Checks can be made out to St. Teresa's Church.

The raid follows another in June that netted 42 immigrant workers in the seaside resort city of Newport. Plus, there have been numerous arrests of individuals for suspected immigration violations--resulting in their effectively being "disappeared," as it is very difficult for family members to get any information from ICE on the whereabouts of loved ones.

The raid also coincided almost exactly with the first meeting of Carcieri's "immigration advisory panel," a whitewash committee the governor appointed in response to protests against his executive order.

The message could not have been clearer: Carcieri is determined, window dressing or not, to carry out an attack on immigrants with the same ferocity that he has attacked state workers, teachers, the poor, the Narragansett Indian Tribe...and the list goes on.

The hypocrisy of state agencies colluding with ICE was evident in the comments of state police Col. Brendan Doherty, who denied that his officers participated in anything that could be called a "raid." "This was a police action," he told the Providence Journal. "These were arrests." He further insinuated that the immigrant workers arrested were likely to have concealed weapons and to have committed other crimes.

DESPITE THE repression, however, dozens of people came out to protest the raid within three hours, gathering around 8 p.m.

The evening protest included practically all immigrant rights activists in Providence, as well as a large group of immigrant workers and their family members. Some came as a result of activist networks such as the Defense Network organized by the Olneyville Neighborhood Association. Others came out after hearing the news on the Spanish-language radio or from neighbors, friends and relatives. Several of the detainees had family members at the protest itself.

Despite the lack of a unified immigrant rights coalition in Providence, protesters were united in their outrage and militancy. They were not intimidated by Providence police, who made certain to display their riot gear and grab and shove protesters as often as possible.

The protest took place outside the ICE office in downtown Providence, where the detainees were initially held before being sent to other facilities. After the first van left the office around 10:30 p.m., activists began discussing how to block other vans from leaving. Unfortunately, by the time the other detainees were moved, around 1 a.m., the crowd had dwindled, and the police were able to control the crowd.

The sentiment of the protest was summed up by activist Carlos López, who said in an interview, "Many people want to defend the people who were arrested. There's not a sense of panic like before. They are leaving fear aside in the process of defending each other."

By the following morning, 12 of the detainees had been released, though some had electronic ankle bracelets. Juan García of the Comité de Inmigrantes en Acción told Providence en Español, "If it hadn't been for the pressure from the people who were there that night, that group would not have been released."

Activists followed up the protest with a press conference the next day denouncing the raid. They are also launched a legal defense campaign and began collecting donations to support the families of the detained workers.

The state may have to face another consequence of this: since the raid happened last week, many of the remaining workers at Tri-State and Falcon have failed to show up for work, leaving the judicial complexes, as well as many other state buildings serviced by the companies, without janitors!

The response to this raid represents a real advance for the immigrant rights movement in Providence, which has been divided and disorganized since the last major coalition fell apart after the May Day march in 2006. And it shows the real potential for building and uniting an even larger coalition that can take direct action to disrupt or even stop these raids when they happen.

Paul Hubbard and Eric Rehder contributed to this article.