The source of women's oppression in society has long been a focus of debate. In the area of anthropology, Eleanor Burke Leacock has made some of the most important contributions to the position that the subjugation of women has not always been a feature of human society, but came to be only with the rise of class society.

Leacock's decades of anthropological research across cultures debunk the myths of "natural" male and female traits, such as men's inherent superiority or women's natural passivity. Documenting historical examples of civilizations where egalitarian gender relations were the norm, she provides concrete evidence not only that women's equality existed in previous societies, but that it is possible in the future.

A collection of Leacock's writing--essays, lectures, reviews and debates--titled Myths of Male Dominance: Collected Articles of Women Cross-Culturally has been reissued by Haymarket Books. The following excerpt is taken from the preface of the book.

THE ARTICLES in this book have been published over the course of almost 30 years. Of the first two in time, one is a critical review of Margaret Mead's Male and Female and the other a report on matrilocality--the residence of a newlywed couple with or near the woman's parents--as found among the Montagnais-Naskapi, native Canadians of the Labrador Peninsula, who by happenstance figured importantly in anthropological debates about the reality of "primitive communism." These two pieces serve to illustrate the twofold basis of my understanding that universal male dominance is myth not fact: my own experience, or the personal/political basis, and my research into the experience of others, or the scientific basis. Despite the constant restatement of the assertion that for various biological or social-psychological reasons women have always been subservient to men, both my direct experience and my cross-cultural studies continue to convince me otherwise.

My critical review of Mead's book reflects my anger as a young woman who was combining motherhood with professional activity as an anthropologist and political activity as a radical. By hindsight it is hard to say just what my understanding was at that time, but on one point I was clear: my main problems arose from practical difficulties working out the logistics of triple duty, compounded by the marginal income I can with reason attribute to my sex. They did not arise, as a barrage of writings was informing me, from failure to "accept myself as a woman." As a young woman, Mead herself had pioneered in field research on the female sex, and had written a classic work on the cultural patterning of sex roles that could be used to rebut neo-Freudian writings on women's essential passivity. Yet there Mead was, in the reactionary atmosphere of the 1950s, discussing as a human universal the assumption that males are by nature "active," while, as a function of their child-bearing role, females are--or should be (a commonly blurred distinction)--"passive." 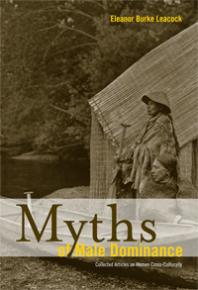 Lifelong experience had made me well aware of how stereotyped is the notion of femaleness as somehow innately "passive." As a child I accepted as natural the way my mother took on and handled whatever activity a situation required. And growing up, partly on a former farm and partly in New York City's Greenwich Village, I learned without knowing it that women made choices about how far they wished to go in accommodating themselves to men and in adopting socially acceptable (i.e., "passive") ways of getting things done. However, the social importance of playing down one's "active" self was not made explicit to me, as far as I remember, until I listened to classmates in high school and college discuss the ground rules for "getting" a man. I was not persuaded, but became more aware of myself as a rebel; in college I educated myself about such matters by joining likeminded mavericks in radical activities and in the extra-curricular study of Marxist literature. Later, when coping with four young children, I might linger with colleagues over a pleasant end-of-the-day drink as long as possible; then rush to the subway, stop at the market to buy as much as would fit in one bag, dash home, take over from the babysitter, straighten things up a bit, settle the hungry children down to something, and start throwing supper together (my filmmaker husband would help but was often home late or on an out-of-town job). Thinking of male colleagues easily talking on, some phoning their wives apologetically, then going home to their prepared suppers, I would mutter, "And I suppose I'm being passive, while they're being active--humph!"

I was well aware, of course, that extant arguments about women's dispositions were supposed to be interpreted more elegantly. I was not easily seduced, however, and knew that stripped down to their bare essentials they reflected wishful thinking on the part of the powers that be. Years later, with my friend and colleague Connie Sutton, I taught a joint seminar entitled "Power, Oppression and Styles of Thought." We explored the characteristics that Western theorists, representatives of nations, classes and their sex in positions of relative superiority, have attributed to their social inferiors, whether these be colonized peoples ("primitives"), people of color, working-class people or women. The similarity in motifs is striking, although the terms may vary. Along with lack of forethought and planning, and lack of logic and rationality, are inevitably dependence and passivity. Whatever the precise source of such formulations on the part of individual thinkers--an interesting problem in itself--the social message to those both above and below them is clear: ignore the course of history that proves otherwise, and know that people who suffer oppression do so because they have neither the ability, the intention, nor the desire to rebel.

HOWEVER, TO know that supposed female "passivity" is but one among many pretexts for explaining away women's oppression only deals with part of the male dominance myth: that women's subordination is a function of their biology or psychology. Furthermore, personal experience may have informed my understanding, but proved nothing to anyone else. The other half of the myth concerns universality, an empirical matter that calls for research. The results of my own study are presented in the following pages, where I give special attention to the equality between the sexes among the Montagnais-Naskapi. I have said that my article on matrilocality represents a basic element in my thinking. The institution generally indicates a high status for women, but this is not of itself the reason it was important to me. It was my unexpected discovery of this practice, in the face of an explicit statement to the contrary by an authority that I respected, that meant a great deal to me as a young woman whose research was going against the grain of established anthropology in a number of ways.

As a student I had accepted Julian Steward's statement that band societies were predominantly patrilocal (with new spouses living near the husband's kinfolk) and that a man hunted better in a region he knew from childhood. I had reason to respect Steward, who came to Columbia when I was working on my dissertation. In the extremely "historical particularist" atmosphere of the time, he was one of the few anthropologists who argued that it was possible to define general "evolutionary" trends underlying the uniqueness of each people's own culture history. In fact, I had cited Steward on the patrilocal band in a paper on Frederick Engels' The Origin of the Family, Private Property and the State that I wrote at the time-though fortunately, as it turned out, I did not succeed in getting it published. However, as part of my research on land use practices in Labrador, the topic of my dissertation, I collected genealogical information on all members of the band with which I was working. To my surprise the material revealed that matrilocality was the primary form of postmarital residence in the recent past, but that it had changed to patrilocality by the time of my fieldwork.

I was familiar enough with scientific distortion. My college notes are spotted with question marks and exclamation points in places where professors presented material that indicated important economic and social similarities among cultures in different parts of the world that, in my view, supported the very hypothesis of social evolution the same professors criticized. Yet that was, after all, a matter of my interpretation versus theirs. It was altogether another matter to discover raw data in the field that I had neither expected nor looked for, and that directly contradicted what I had thought to be a sensible statement about a male priority in social organization.

Not that patrilocal residence automatically meant male dominance among the Montagnais-Naskapi. Reading the 17th century Jesuit accounts of the women's power and independence had made it clear that this was not the case. Yet I knew that conflicts over postmarital residence reveal one aspect of conflicts between the sexes when egalitarian social relations are being undermined. Here, then, was a prime example of changes brought about in social organization and women's autonomy when an egalitarian society was transformed by colonization and the combined influence of missionaries and traders. Never again did I accept seemingly reasonable and reputable statements about women's supposed subservience to men in otherwise egalitarian societies. And time and again, careful reexamination of the data and of the circumstances under which they were collected have proved me right: indications of male dominance turn out to be due to either (1) the effects of colonization and/or involvement in market relations in a previously egalitarian society; (2) the concomitant of developing inequality in a society, commonly referred to in anthropological writings as "ranking," when trade is encouraging specialization of labor and production for exchange is accompanying production for use thereby undercutting the collective economy on which egalitarian relations are based; or (3) problems arising from interpretations of data in terms of Western concepts and assumptions.