Behind the U.S. raid in Syria

Nicole Colson explains the backdrop to a U.S. military raid carried out inside Syria.

The attack was carried out on the Al-Sukkari farm near the town of Abu Kamal, five miles inside the Syrian border from Iraq. According to reports, U.S. Special Operations forces raided a building in the area, and at least one villager reported that two men were later "taken away" by American security forces.

Bush administration officials refused to comment publicly on the operation, but Iraqi government spokesman Ali al-Dabbagh claimed that the area in Syria was a "staging ground for activities by terrorist organizations hostile to Iraq."

Anonymous U.S. sources told reporters that the attack was aimed at Badran Turki al-Mazidih, known as "Abu Ghadiyah," an Iraqi national who was alleged to be a member of al-Qaeda in Mesopotamia. The U.S. claims that Ghadiyah, who was reportedly killed in the attack, ran a network that funneled foreign fighters, weapons and funds from Syria into Iraq since 2004. 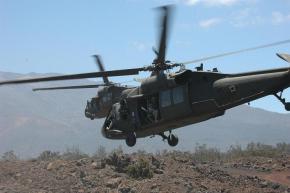 All of the casualties, according to the U.S., were militants involved in running weapons, money and fighters across the border.

But eyewitnesses and relatives of those killed in the attack tell a different story, according to a report from the Syrian Arab News Agency (SANA), Syria's state-run news service.

"We were surprised at five in the evening when two helicopters landed near where we live," said Souad al-Jassem, whose husband was reportedly among those killed. "A number of American soldiers, some of which spoke Arabic, came out of the helicopters and entered the tent where I live with my children and husband, who works as groundkeeper for the building.

"The soldiers fired at us for no reason, and then at the workers inside the building, as well as a fisherman who was close by. They then got back on the planes and took off."

Several civilian construction workers were killed, al-Jassem said, and others, including one of her children, were wounded.

"I was fishing, and I saw four helicopters," one man, his arm in a bandage, said on Syrian state television. "They started shooting like the rain. I saw eight soldiers coming out [of a helicopter] with weapons...I tried to flee, and I was hit."

Following the attack, hundreds of people joined the funeral procession to the village of Hamdan, where the bodies of those killed were buried. Some shouted anti-U.S. slogans and carried banners reading, "Down with Bush and the American enemy."

Speaking at a press conference during a visit to London, Syrian Foreign Minister Walid al-Moallem condemned the U.S. raid as an act of "criminal and terrorist aggression," and warned that "if they do it again, we will defend our territories."

THE CROSS-border raid was the first of its kind involving a helicopter attack and U.S. boots on the ground that far into Syrian territory. It was designed to be a warning to the Syrian government.

"You have to clean up the global threat that is in your backyard, and if you don't do that, we are left with no choice but to take these matters into our own hands," one anonymous senior U.S. official told a reporter.

But why did the U.S. choose this moment to strike inside Syria? As Joshua Landis, co-director of the Center for Middle East Studies, pointed out in a statement, "Syria has been improving border compliance steadily. General [David] Petraeus announced this month that Syria has brought down infiltration from 100 to 20 a month."

The raid further complicates the relationship between the U.S. and the Iraqi government set up under the occupation. With more than 1 million Iraqi refugees inside of Syria, the Iraqi government wants to remain on friendly terms with Syria. But it has refused to condemn the U.S. attack, agreeing with Washington that insurgents have been operating from inside the Syrian border.

According to the Associated Pres, the raid appeared to take the Baghdad government by surprise and "intensified worries that it could be used as ammunition for critics of the troubled U.S.-Iraqi security deal." One of the major sticking points of the deal is the issue of providing a legal basis for the approximately 150,000 U.S. troops in Iraq once a United Nations mandate expires on December 31.

Some commentators speculated that the raid was designed to be an "October surprise"--an attack to sway voters prior to the November election into fearing the threat of terrorism from Syria, and therefore voting for Republican John McCain.

More likely, however, is that the Bush administration is attempting to expand the so-called "Bush Doctrine" of pre-emptive war to include unprovoked military strikes across international borders, such as the similar raid in Pakistan in September. As the New York Times' Eric Schmitt and Tom Shanker noted:

The timing was startling, not least because American officials praised Syria in recent months for its efforts to halt traffic across the border.

But in justifying the attack, American officials said the Bush administration was determined to operate under an expansive definition of self-defense that provided a rationale for strikes on militant targets in sovereign nations without those countries' consent...

In seeking to carry out cross-border missions inside Pakistan and now in Syria, the United States government is expected to make the case that these operations will help protect the lives of American troops. It is not clear how far-reaching the White House may be in seeking to apply the rationale, but several senior American officials expressed hope that it would be embraced by the next president as well.

Robert Dreyfuss made similar points in an article in the Nation:

A parallel new Bush Doctrine is emerging, in the last days of the soon-to-be-ancien regime, and it needs to be strangled in its crib. Like the original Bush Doctrine...this one also casts international law aside by insisting that the United States has an inherent right to cross international borders in "hot pursuit" of anyone it doesn't like. They're already applying it to Pakistan, and this week Syria was the target. Is Iran next?

The logic of the U.S., as Anthony Cordesman, a military analyst at the Center for Strategic and International Studies, told the Washington Post, is that "you can only claim sovereignty if you enforce it. When you are dealing with states that do not maintain their sovereignty and become a de facto sanctuary, the only way you have to deal with them is this kind of operation."

Of course, the very invasion of Iraq was illegal in 2003, and it flouted international law. So some may say, these cross-border raids are small potatoes. But they're not. This is a big deal. If it becomes a standard part of U.S. military doctrine that any country can be declared "criminal," and thus lose its sovereignty, then there is no such thing as international law anymore.

When Defense Secretary Robert Gates was asked about this, here's what he said, as quoted in the Post article cited earlier: "'We will do what is necessary to protect our troops,' Defense Secretary Robert M. Gates said in Senate testimony last month, when asked about the cross-border operations. Under questioning, Gates said that he was not an expert in international law but that he assumed the State Department had consulted such laws before the U.S. military was granted authority to make such strikes."

Not an expert in international law? He'll leave it to the State Department? And this is the guy that Barack Obama's advisers say ought to stay on at the Pentagon under an Obama administration?

The U.S. attack in Syria sets a precedent for a dangerous new expansion of the "war on terror."